MIT professor Gian-Carlo Rota, mathematician and philosopher, is dead at 66 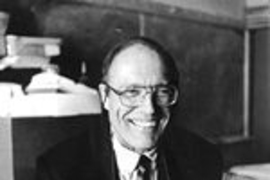 Massachusetts Institute of Technology professor Gian-Carlo Rota, an internationally respected mathematician and philosopher and a dedicated and beloved teacher, died of heart failure in his home earlier this week. He was 66.

Dr. Rota apparently died in his sleep. He was found in bed in his night clothes on the afternoon of Monday, April 19, after failing to arrive in Philadelphia Sunday afternoon for a series of three lectures he was to give this week at Temple University. The cause of death was atherosclotic cardiovascular disease, according to the Middlesex County Medical Examiner.

Dr. Rota was the only MIT faculty member ever to hold the title of Professor of Applied Mathematics and Philosophy.

As a mathematician, he is credited with having transformed his specialty area, combinatorics — which he described as "putting different colored marbles in different colored boxes, seeing how many ways you can divide them" — from an insignificant field to one of the most important areas of mathematics today.

"Gian-Carlo Rota almost single-handedly lifted the subject of combinatorics from a barely respectable obscurity to one of the most active areas of mathematics today," said Richard Stanley, a mathematics professor at MIT who is also a former student of Dr. Rota's. Stanley was one of the organizers of Rotafest, a four-day mathematical conference held at MIT in 1996 honoring Dr. Rota's 64th birthday.

"Through his commitment to the highest standards of scholarship and his generous sharing of ideas and time, he has inspired innumerable students and colleagues to share his enthusiasm and joy for combinatorics and related areas of mathematics," Stanley said.

As a philosopher working in the 20th century continental tradition of phenomenology — a philosophical tradition established by Edmund Husserl — Dr. Rota was known for his humanistic approach.

"He always brought a very fresh perspective on philosophical issues because he dealt with them with a mathematician's style and interest," said Robert Sokolowski, a priest and philosophy professor at The Catholic University of America. "He had a good sense of human realities. He felt that the continental approach — as opposed to the analytical — brought out more effectively the humane side of scientific and philosophical questions. He was very imaginative. He saw the big context of all those things. That's why he's so irreplaceable."

As an author, Dr. Rota was known for his elegant, but forthright style and subtle wit. In his forward to Dr. Rota's most recent book, Indiscrete Thoughts (Birkhäuser, 1997), Dr. Sokolowski said, "His writings have much of Socrates' irony and wit, and the occasional barb is also socratic, meant to illuminate and to sting the reader into looking at things afresh. In these essays, mathematics is restored to its context in being and in human life."

Some of the essays in Indiscrete Thoughts debunk the "myth of monolithic personality" through sketches of the lives of notable mathematicians. Dr. Rota commented that when the book was first published one mathematician wrote that he would not speak to Dr. Rota again. The book, which is divided into three parts — two on mathematics and one on philosophy — has been nominated for the 1999 Edwin Goodwin Ballard Book Prize in phenomenology presented by the Society for Phenomenology and Existential Philosophy.

He was co-author of an earlier book of essays on mathematics, science and philosophy called Discrete Thoughts (Birkhäuser, 1986), and at the time of his death, was working on the third book of this trilogy, which he hoped to call Forbidden Thoughts. He had recently completed the first draft of an introduction to probability titled Geometric Probability (Birkhäuser).

In the early sixties, Dr. Rota founded a mathematics journal called Advances in Mathematics, which is described by mathematician and editor Peter Renz as "the most prestigious, most elegant, interesting and unusual of the mathematics journals. And it's entirely Gian-Carlo's creation. He wrote the acid-tongue book reviews that could be devastating."

"He was my first graduate student at Yale," said Jacob T. Schwartz, who was Dr. Rota's dissertation advisor and is now a professor at New York University. "He began as a functional analyst and after a few years moved on to combinatorics where he became a leading national and international figure.

"He really loved mathematics all his life very passionately. He was also a person of great cultural and literary attainment. He loved to write, loved to edit. He was a gourmet of mathematics. He was ebullient, a bit of a raconteur."

Dr. Rota was able to engage people in ways that made lasting impressions. He is known among students at MIT for his accessibility and his clear presentation of material in both math and philosophy courses. He was respected for his deep understanding of those subjects and revered for his love of communicating.

"The first course of his I took changed my life," said Eric Prebys, a senior majoring in mathematics and computer science. "He helped me to see the world in a totally different way. And that's what I wanted out of college. What always came through was his total faith in his students," said Mr. Prebys, who took two of Dr. Rota's phenomenology courses, as well as a math course in probability — "the best probability course at MIT," said Mr. Prebys.

Dr. Rota inherited that probability course from the legendary mathematician Norbert Wiener. In July 1998 he was named the Norbert Wiener Professor of Mathematics. He won the James R. Killian Faculty Achievement Award at MIT in 1996, which recognizes extraordinary professional accomplishments and service to MIT. He had been advisor to at least 44 graduate students and many undergraduates throughout his career. He joined the MIT faculty in 1959 in the mathematics department. The word philosophy was added to his title in 1972.

Dr. Rota was the invited presenter at the 1998 American Mathematical Society (AMS) Colloquium Lectures, a series of three lectures of increasing complexity presented each year by one of the world's most eminent mathematicians. He was to have presented three lectures — the Groswald Memorial Lectures — at Temple University in Philadelphia on Monday, Tuesday and Wednesday. He was elected to the National Academy of Sciences in 1982, was vice president of the American Mathematical Society (AMS) from 1995-97 and was a member of numerous other mathematical and philosophical organizations.

He was author or coauthor of seven books and founding editor of three journals: Journal of Combinatorial Theory (1966), Advances in Mathematics (1967) and Advances in Applied Mathematics (1979), as well as founding editor of several book series, including Mathematicians of Our Time (MIT Press); Contemporary Mathematician (Birkhäuser Boston) and Encyclopedia of Mathematics (Cambridge University Press); and served on the editorial boards of many other journals. He had published close to 200 papers in mathematics or philosophy, and more than 500 short book reviews.

He had been a consultant to the Los Alamos Scientific Laboratory since 1966, and for the Rand Corporation from 1966-71 and Brookhaven National Laboratory from 1969-1973. A book entitled Essays of the Future, edited by Dr. Rota, is dedicated to Nick Metropolis, the sole survivor of the original Los Alamos group. The book, scheduled for publication in October, was conceived entirely by Dr. Rota.

Dr. Rota was born on April 27, 1932 to a prominent family in Vigevano, Italy. Many of his family members had achieved prominence in their fields; his uncle by marriage, Flaiano, wrote scripts for Federico Fellini's films, including La Dolce Vita; his father, Giovanni Rota, was a civil engineer and architect who specialized in anti-earthquake structures.

Dr. Rota was educated in Italy until 1945, when his family was forced to leave Vigevano to escape Mussolini's death squads during World War II. Giovanni Rota was known to be anti-fascist and had been listed on Mussolini's death list. He took his family to hide for a time in Northern Italy before crossing the border into Switzerland and later moving to Ecuador, where Dr. Rota completed high school. The story of the family's escape has been told by his sister, Ester Rota Gasperoni, in two books, Orage sur le Lac (Rainstorm on the Lake) (L'Ecole des Loisirs, 1995) and L'arbre des Capulies (The Cherry Tree) (L'Ecole des Loisirs, 1996).

He is survived by his sister, Ester Rota Gasperoni; a nephew, Franco Gasperoni; and a niece, Laura Gasperoni Patanella, all of Paris; and an aunt, Rosetta Flaiano, of Switzerland.