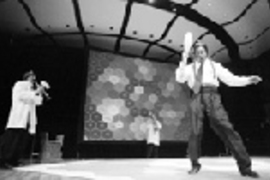 ↓ Download Image
Caption: The Flying Karamazov Brothers perform a new piece during Sens*bles that they developed with Associate Professor Neil Gershenfeld's group. The floor has digital sensors and every move of their juggling pins triggers music, so musical pieces can be choreographed or an original symphony created each time they perform on the floor. The performers will use the act on tour next year.
Credits: Photo / Donna Coveney

Caption:
The Flying Karamazov Brothers perform a new piece during Sens*bles that they developed with Associate Professor Neil Gershenfeld's group. The floor has digital sensors and every move of their juggling pins triggers music, so musical pieces can be choreographed or an original symphony created each time they perform on the floor. The performers will use the act on tour next year.
Credits:
Photo / Donna Coveney

Sens*bles was a symposium on the state of the art and research in affective and interactive computing. MindFest combined panel discussions on education and computing with highly hands-on workshops for pushing the limits of time, space and fun.

Sens*bles opened with comments by President Charles M. Vest and Nicholas Negroponte, the Jerome B. Wiesner Professor of Media Technology and director of the Media Lab.

Walt Mossberg, technology columnist for the Wall Street Journal, served as emcee. He introduced the keynote speakers, Professor Marvin Minsky and Associate Professor Rosalind Picard of arts and sciences, while the standing-room-only crowd struggled to strap on their light-up, stress-detecting wristlets in the darkened auditorium. They spoke on "When Computers Come to their Senses." The second morning session, "Affective Interaction," featured talks by Media Lab research assistant Jocelyn Scheirer, Jack Breese of Microsoft Research and Byron Reeves of Stanford University.

The afternoon sessions of Sens*bles portrayed through music and juggling just how wide-ranging and nuanced "sensible" computing can become. In "Sound and Feeling," Manfred Clynes, president and CEO of MicroSound International Ltd., demonstrated Superconductor, a program that diagnoses classical composition for its "idiosyncratic pulse" and then allows the user to "shape" the piece to his taste.

Media Lab research assistant Teresa Marrin next demonstrated the conductor's jacket, a simple black garment "sensibled" to the gills with 30 sensors. As Ms. Marrin "conducted" a movement of Brandenberg Concerto #4, bright lines in orange, red, green or blue spiked or drooped across the wall-sized screen behind her.

Principal research scientist Joe Paradiso, who develops expressive footwear, narrated as New York-based dancer-choreographer Mark Haim performed while wearing "cybershoes." As he moved, his cybershoes not only triggered different sounds from various pressures sensors inside; they also triggered babbling voices. Meanwhile, measurements of activity within those 17 shoe sensors were displayed on 17 line-graphs behind him.

Associate Professor Hiroshi Ishii, the Fukutake Career Development Professor of Research in Education, demonstrated "musicBottles," a project of the Tangible Media Group. The little vessels looked like perfume bottles and are "containers of digital information," meaning that when the stoppers were raised, music floated out.

Tod Machover, associate professor of music and media, concluded the research presentations with a talk and demonstrations of two new instruments, The Simple Thing and The Big Thing, which will form part of his Toy Symphony along with virtuoso musicians and children aged 3&endash;8.

Professor Machover, holding the ostrich-egg-like Simple Thing as he spoke, noted that sensing technology is leading to three new trends: new tools are available to virtuoso musicians, new instruments are available to non-musicians, and music itself is leaving its stage setting to occur anywhere.

The Big Thing looked like the offspring of the Cat in the Hat and Willie Wonka. It wasn't ready for sound, but it turned up the visual whimsy dial and was a nice segue for the Flying Karamazov Brothers, a professional four-man juggling act who have been collaborating with the Media Lab. They amused the half-dozen children in the room most when they appeared in Power Ranger-style helmets and beat their own heads with sensor-laden clubs.

MindFest opened two days later in the Media Lab building with comments by Associate Professor Mitchel Resnick, Torben Sorenson of the LEGO Co., and Professor Negroponte, who emphasized the significance of a $5 million donation to the Media Lab by LEGO.

Professor Resnick, co-organizer of MindFest with Media Lab research scientist Fred Martin, described the event as a "gathering of playful inventors and as a place to look at the role of invention -- playful invention -- in peoples' lives." He gave the keynote speech, "The Pleasure of Making Things," on Saturday. Seymour Papert, professor of education and media technology, gave Sunday's keynote speech, "Mindstorms the Book, Mindstorms the Thing."

Panels titled "Master Tinkerers," "Robotics in the Classroom," "Kids and Programming," and "Beyond Black Boxes" filled Bartos Theater during the two-day event.

"Why Are So Few Girls Tinkering?," a well-attended panel moderated by Amy Bruckman of Georgia Tech, included Media Lab Assistant Professor Justine Cassell, Laura Allen of Vision Education, and Dorothy Bennett of the EDC Center for Children and Technology.

Following presentations of data indicating there are differences in tinkering style (including tinkering with computers and computer games) between girls and boys, Professor Cassell noted that "gender is highly context-dependent" and urged educators and software developers to "design so people can use technology to discover who they are and what they want to be in the richest way possible."

Children from elementary through high school age literally waded in the stuff of which inventions are made all over the Media Lab and especially in an area called the Construction Zone. Two seven-year-old boys found themselves knee-deep in LEGOs in one corner, while a circular table of feathers, tubing, pipe cleaners and glue got some attention from the "Make Your Own Mechanical Toy" crowd. Teenaged boys "walked" their newly programmed LEGO mind-doggies. And everywhere was the gentle pulse of invention within a community space: "Have you got any twirly things? I need more wheels! Seen any of these? Hey -- are you using that? Can I try it?"

MindFest is organized by the Epistemology and Learning Group and the Okawa Center at the Media Lab.

A version of this article appeared in MIT Tech Talk on October 27, 1999.