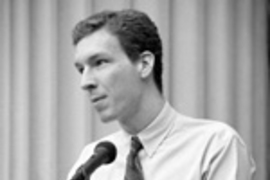 The boisterous tone of Saturday's student-led fundraising rally changed to a somber yet equally powerful mood when Grant Kristofek, a sophomore in mechanical engineering, stood up to speak to the crowd gathered on the steps of 77 Massachusetts Avenue.

Leukemia has deeply affected Mr. Kristofek this year. His freshman roommate in Burton-Conner, David Li, had been diagnosed with acute lymphoblastic leukemia (ALL) while in high school. After two years of chemotherapy, with his illness apparently in remission, Mr. Li entered MIT in 1998. He discovered early in 1999 that his leukemia had returned and that he needed a bone marrow transplant. He returned to New York City for treatment and to search for a bone marrow donor. The two friends have stayed in touch since Mr. Li's illness recurred.

Mr. Kristofek encouraged his peers to register with the National Marrow Donor Program at MIT's upcoming bone marrow drive, stressing the importance of registering minority donors. He then read aloud a letter written by Mr. Li and addressed to the MIT community.

On learning his disease had recurred, Mr. Li wrote, "I was devastated. It was a nightmare becoming reality. All the aspects of treatment that I had thought were history became my foreseeable future.

"The plan was to use the same chemo to get me back into a remission and then I would get a bone marrow transplant to make it last. And so the search began, first to my sister, then to my family and the rest of the world. All the registries in North America, Asia and Europe were searched. My sister was only a halfway match and the registries have, thus far, not produced any better. I will need to have a transplant soon; chemotherapy did not provide a lasting solution the first time, so it is not expected to work this time, either.

"To my friends who had only known that I disappeared one January day, I regret having you find out in such an impersonal way... [Now] I want people to understand the need for more donors. I am not just a cancer patient. I am a person like you. And, like you would be, I am scared. I have always relied on myself to face any challenge, but the availability of a donor is something I cannot control. For that, I need the help of others.

"I hope you will agree to be a [bone marrow] donor. My situation is not unique. There are many sufferers of leukemia and other blood diseases who need transplants but are powerless to the whims of fate. Helplessness is a terrible feeling. Please decide to help end this senseless suffering.

"Three thousand people search the registry every day in search of a life-saving donor. You could be it."

MIT's Marrow Drive '99 will be held on Friday, Nov. 19 in the Bush Room (10-105) from 10am-4pm. Potential donors fill out a form and donate a small sample of blood for testing; they will be contacted later if it turns out they match someone in need of bone marrow.

A version of this article appeared in MIT Tech Talk on November 3, 1999.