Could become alternative to conventional procedures such as photolithography
Publication Date:
Press Inquiries 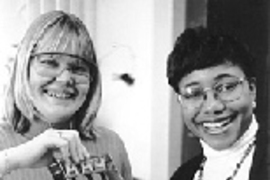 CAMBRIDGE, Mass. -- The microscopic 3-D stripes of material that Assistant Professor Paula T. Hammond is depositing on thin gold wafers represent a new technique for creating patterns -- and structures -- on surfaces. The technique, which Professor Hammond pioneered some two years ago, involves "printing" a pattern onto a surface, then taking advantage of a material's electrical properties to build up layers of that material over the pattern.

Because the technique is relatively easy and inexpensive it could become an alternative to conventional patterning procedures such as the photolithography used in the manufacture of computer chips. One potential application: printing electronic circuitry on treated paper or plastic surfaces. "This would be much harder to do with photolithography and would also be more expensive," Professor Hammond explained.

In the December 18 issue of the journal Advanced Materials, Professor Hammond and graduate student Sarah L. Clark, both of the Department of Chemical Engineering, report new advances in the work. These include the automation of the process and the ability to create more complex patterns using changes in processing conditions.

The technique specifically allows the researchers to create layers of polymer -- materials made of repeating subunits -- over a pattern (such as a stripe). They can currently create stripes that are only about 3 1/2 micrometers, or millionths of a meter, wide (a human hair is about 75 micrometers in diameter). Layers of an inert material are deposited between the stripes.

Professor Hammond's technique is a variation of one called layer-by-layer assembly, in which polymers with different charges are sequentially absorbed onto a surface. "For example, a polymer that's positively charged will attract and absorb one that's negatively charged," Professor Hammond said.

Layer-by-layer assembly, however, produces continuous polymer films. Professor Hammond is the first to create patterns. "Continuous films [like those produced via the original layer-by-layer technique] have several applications, but those applications can be greatly increased if you can pattern the surface, tell the [polymer] film where to go," Professor Hammond said.

Her variation begins by "stamping" a surface with the pattern of interest using microcontact printing, a technique developed at Harvard by Professor Hammond's thesis advisor, Professor George Whitesides. Professor Hammond took microcontact printing in another direction: she found that "ink" with specific properties would selectively attract certain polymers. Meanwhile the spaces between the stamped patterns, which she fills with the inert material, repel the polymer.

From there, just as with the original layer-by-layer deposition, Professor Hammond coaxes polymers of alternating charges to form layers over the pattern. Layers of inert material continue to fill in the gaps.

"This was a surprise," Professor Hammond said. Remembering the moment when her team first discovered the switch, initially with respect to salt content, she continued: "We had to back up and say, 'wait a minute now!' We had to check and double-check, until we could say, 'yes, this has happened.'"

The researchers have since been instigating "reversals" to build ever more complicated structures. For example, as reported in Advanced Materials they can now produce "blankets" of polymer over the entire surface, covering both the layers of polymer and the layers of inert material. (In this case the reversal is incomplete, allowing polymer to spread over both types of material.) "It's really getting fun now," Professor Hammond said.

The Advanced Materials paper also reports how the researchers have now automated the process by adapting a machine originally designed for staining slides used in biological studies. Among other advantages, automation means less time handling samples and better-controlled conditions. This has resulted in more uniform patterns, as well as an increase in the number of layers that can be deposited. The researchers have also shown that the technique is reproducible (they have created up to ten samples at a time).

Other members of Professor Hammond's research team are graduate students David M. DeWitt and Xueping Jiang, both of the Department of Chemical Engineering. Martha F. Montague, MIT SB 1998, was also on the team.

The work is funded by the Office of Naval Research and the MIT Center for Materials Science and Engineering.