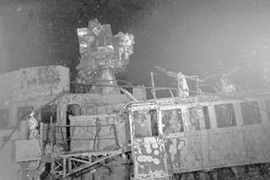 ↓ Download Image
Caption: The USS Yorktown in her present state three miles deep on the bottom of the Pacific Ocean. This picture shows the ship's air traffic control center (the four windows on the right), topped by the remains of the gun director, an early version of computerized weaponry that included a telescope which directed the guns by remote control.
Credits: Photo courtesy / David Doubilet/National Geographic

Caption:
The USS Yorktown in her present state three miles deep on the bottom of the Pacific Ocean. This picture shows the ship's air traffic control center (the four windows on the right), topped by the remains of the gun director, an early version of computerized weaponry that included a telescope which directed the guns by remote control.
Credits:
Photo courtesy / David Doubilet/National Geographic

Professor David Mindell of the Program in Science, Technology and Society Program (STS) was a member of the search and survey team on the National Geographic Midway expedition that discovered the USS Yorktown more than three miles deep in the Pacific Ocean on May 19.

Dr. Mindell and the scientific team used video and sonar technology to take sound "pictures" of the ocean floor and locate the ship, sunk during the Battle of Midway some 56 years ago. The National Geographic expedition was led by Dr. Robert Ballard, discoverer of the Titanic wreck, with the goal of locating, mapping, exploring and photographing the ship.

"We searched in a 10-by-20-mile box on the bottom of the ocean floor," said Dr. Mindell, an electrical engineer and historian of science and technology who participated in the Mediterranean Sea expedition last summer that yielded amphorae and other artifacts from ancient Rome and Carthage.

"You 'mow the lawn' over the site with a sonar sled, going back and forth, which we did for several days," he said about the Yorktown search. "The sonar gathered data to make a digital map of the ocean floor. Then we had to interpret the data to determine which blips were rocks and hills and which one might be the aircraft carrier. The ship turned out to be the blip we thought it was. We actually found the ship in the data with a computer several days after we'd illuminated it with the sonar."

The expedition used the US Navy's deep submergence support ship, the Laney Chouest, and two underwater vehicles to locate and photograph the aircraft carrier on the ocean floor. One of the submerged vehicles was a sled-like search vehicle from the University of Hawaii. The other was a US Navy bottom-surveying robot called ATV (advanced tethered vehicle) that can see about 100 feet with video and still cameras.

The Yorktown was one of the first modern aircraft carriers built in the United States; she was sunk in 1942 during the World War II Battle of Midway. Dr. Ballard, Professor Mindell and the rest of the crew found her at a depth of 16,650 feet, nearly a mile deeper than the Titanic.

"No one has ever gone after the USS Yorktown and the Japanese carriers lost in the Battle of Midway because of the depth where they lie," said Dr. Ballard.

"This is very near the depth limits of these technologies," said Dr. Mindell. "Everything about the operations gets more difficult the deeper you go."

Bill Surgi, a Midway survivor who was on board the Laney Chouest when the scientific team transmitted the first pictures of the underwater wreck, was able to positively identify the ship from the video pictures obtained by the robot camera at the bottom of the ocean.

Professor Mindell was not aboard the Laney Chouest when those first video pictures arrived -- he was already back at MIT finishing out the semester. But he was on board a few days earlier when the wreck was identified from the scientific mapping of the ocean floor.

"It's really interesting, the role that vision plays in these discoveries. Even though we had identified the Yorktown from the mapping of the ocean floor, in the eyes of the public, it didn't become official until that eyewitness positively identified it," he said.

As both a historian and an engineer, Professor Mindell studies the ways that technology and human memory intersect, and he is developing new methodologies for archaeology as it moves into very deep water.

"When we were laying out the search, we had a bunch of different positions where people said the ship sank. It's not unusual for a historian to have conflicting information. We had to make a historical judgment about which data to believe, and then integrate it with the technical capabilities of the sonar, shipboard operations and weather and time constraints to lay out a search strategy," he said.

"I can see all the video now, even after the fact. But the search phase -- where we work with historical and technical information -- is really more critical to my research."

The Yorktown discovery has received a great deal of media attention, with articles appearing in major newspapers across the nation. Professor Mindell was interviewed in a National Public Radio account of the expedition on Thursday, June 4. National Geographic magazine will publish an account of the expedition, and has planned a television documentary for early next year.

In the meantime, Professor Mindell leaves next week for Turkey to begin the first in a series of surveys of shipwrecks and shore sites in the Black Sea, which served as a common route between the Mediterranean and Asia in ancient times. Because the Black Sea lacks oxygen at depths greater than 600 feet, biological decay of ships on the ocean floor is unlikely, allowing for hope that a ship found there would be perfectly preserved.

STS graduate student Brendan Foley and mechanical engineering senior Sara Webster will also participate in the Black Sea expedition, which is being funded by grants from the Wade Fund at MIT and the J.M. Kaplan Fund.