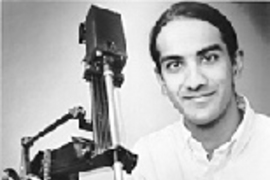 CAMBRIDGE, Mass.--The winner of this year's $30,000 Lemelson-MIT Student Prize, Akhil Madhani, said he got the idea for his surgical robot, dubbed Black Falcon, in 1993 when he saw a video of a teleoperated surgical robot that allowed surgeons in a MASH unit to operate on wounded soldiers miles away on a battlefield.

While that device looked spectacular, Dr. Madhani believed that a more useful task for telemedicine would be the improvement of the tools of minimally invasive surgery (MIS), a surgical method used on thousands of people everyday in the United States. He then watched his father, an orthopedic surgeon in Seattle, to learn more about surgical tools and their shortcomings.

"This was when I decided to go forward with the idea of Black Falcon," he said. The surgical robot holds tremendous promise for improving MIS techniques and vastly extending the range of surgeries that can be performed using them.

MIS uses a very small external incision to enter the body and perform internal procedures, like knee surgery or gall bladder removal. The types of surgery that can be performed with the technique are limited because the tools don't provide much mobility. Often, surgeons must use traditional surgical techniques--opening up the patient by cutting a long incision. Patients' recovery time after those traditional surgeries is much longer than with MIS.

Dr. Madhani, 29, created Black Falcon as his thesis project. He received the PhD from the Massachusetts Institute of Technology last November and now works for Walt Disney Imagineering Research and Development in Los Angeles.

The major improvement Black Falcon offers over current minimally invasive surgical tools is increased dexterity. The new device is so maneuverable that surgeons will be able to perform more complicated surgical tasks like suturing vessels and tying knots while performing MIS. Black Falcon acts like an extension of the surgeon's hand and fingers, able to reach around organs and grasp tissue. Using it, surgeons will also be able to hold their arms and hands in more comfortable positions, which should cut down on fatigue.

The base of the device sits on a table near a patient. Its eight tiny motors connect to wires running through the Falcon's arm for controlling movement and relaying feedback to the surgeon. The cylindrical arm, about a foot and a half long and half an inch in diameter, is fitted with a tiny metal wrist and two half-inch, finger-like tongs attached to the end. The wrist and fingers move like their human counterparts, making even complicated motions like suturing possible. The fingers can hold a needle or human tissue, or be removed and replaced by a scalpel or other tool.

Black Falcon is called a slave robot. It moves exactly the way it's commanded. Moreover, it relays everything it encounters back to the master, which is held and controlled by the surgeon, both several feet away at another table.

In between the master and slave is a computer with highly sophisticated programming that allows the surgeon to actually feel anything the Black Falcon touches. The software exactly mimics pressure applied by the surgeon, as well as the resistance encountered by the Falcon's wrist and fingers. Dr. Madhani credits the software programming to Dr. Gunter Niemeyer, another MIT graduate who worked with him on the project.

Dr. Madhani designed and built Black Falcon while working with Dr. J. Kenneth Salisbury, a principle research scientist in the Artificial Intelligence Laboratory who is well-known for his work with robots that respond to touch and give force feedback. Three years ago another of his students, Thomas Massie, won the Lemelson Prize, in part for his work on the PHANToM master device, the precursor of the master used with Black Falcon.

As in traditional MIS, a tiny fiber-optic camera is inserted into the patient through a separate incision. That camera provides a visual display on a computer monitor. A mirror placed flat in front of the monitor and under the surgeon's hands reflects the image, giving the impression of working directly over the patient. Any tremor in the surgeon's hand is filtered out by the computer, so surgery using this system is actually more stable than if the surgeon holds the tools directly.

"Down the road, this system could be used for image-guided surgery, where a 3-D image of the body is overlaid onto the surgical field to bring in information from other diagnostic sources--for instance, to locate and remove a tumor," said Dr. Salisbury.

He said the system could also guide a surgeon's hand down inside a patient's body by producing a sort of virtual funnel whose walls would serve as an artificial barrier. That could prove extremely useful for surgery in very small areas where a slight slip of the scalpel could do real damage.

"Akhil is absolutely wonderful to work with," said Dr. Salisbury. "He's very skilled at mixing the theoretical and intuitive approach to problems. As I move from being a hands-on person to someone who's managing other people's research, I appreciate working with people like Akhil and Thomas [Massie]. You can sit in your office and spin wonderful fantasies and they come in the next week and they've got these things built."

The Lemelson-MIT Awards program announced that Dr. Madhani was the Student Prize winner at a press briefing held at the Massachusetts Institute of Technology on February 11. Internationally recognized economist Professor Lester C. Thurow, director of the Lemelson-MIT Awards, made the announcement. In selecting Dr. Madhani as the Lemelson-MIT Student Prize winner, the prize committee praised his "demonstrated inventive ability and for the visionary qualities of his projects," including the Black Falcon and its advancement of MIS tools.

The Lemelson-MIT Awards Program was established in 1994 by the late independent inventor Jerome H. Lemelson and his wife, Dorothy, to recognize the nation's most talented inventors and to promote positive role models for American youngsters. The program also presents an annual $500,000 prize for invention and innovation, as well as a Lifetime Achievement Award for distinguished careers in inventing. The recipients of those two awards will be announced on April 15 in New York.

Designing and building the surgical robot wasn't a huge leap for Dr. Madhani. It was more a series of steps; he's been building things since he was a child. But winning a $30,000 prize for his inventiveness is new, and he's not entirely comfortable with the attention he's receiving. He focuses instead on the common denominators of inventiveness.

"A lot of people in other fields are inventive--but they're not inventing things you can see," he said. "It's not like inventors have only good ideas, either. My theory is that they have the same proportion of good ideas to bad as other people. In order to have more good ideas, they have a lot of bad ideas, too."

Funding for Dr. Madhani's research was provided by the Defense Advanced Research Projects Agency (DARPA). An earlier device, very similar to Black Falcon, has already been licensed to a company for development and manufacturing.