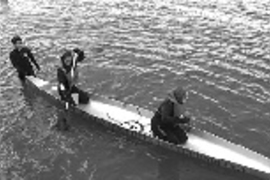 A group of MIT students took the "T" all the way to Burlington, VT last weekend -- not the MBTA, but the MI"T" -- a concrete canoe designed and built by a student team for the 1998 ASCE Concrete Canoe Competition held April 17-18.

The American Society of Civil Engineers (ASCE) and Master Builders Inc. co-sponsored the unusual competition, which demands that each team design, construct and actually race their concrete vehicle on Lake Champlain. It was conceived to "show that concrete is a versatile material that can be used in many ways," said Emily Dodd, a graduate student in construction management in the Department of Civil and Environmental Engineering (CEE). She served as project manager for this year's MIT team, which placed third in overall competition.

It is indeed possible to come up with a floating concrete mix, "but it's totally opposite anything you'd ever use in a building," Ms. Dodd said. Instead of going for strength, the team aimed for lightweight resilience.

They named their boat after Boston's subway system because both are "sleek, slender, and depend on efficiency to transport people swiftly," said Ms. Dodd. But as sometimes happens to its namesake, the "T" canoe broke down under the stress of loading and unloading passengers. She lost a chunk and developed a crack that separated stern from bow.

"There was a weird wind. Conditions were so rough that almost all the canoes went down," said Chris Semlies, another construction management graduate student. "Two of them broke -- ours and one other one."

"They didn't provide a loading dock, so we had to pull ourselves into the canoe while standing in waist-deep water with four-foot waves," said Ms. Dodd. "The walls were only 3/8 of an inch thick. If you pull on them enough, they're going to break."

The fatal damage occurred as the racers boarded the "T" for the final race (women's long distance). A chunk of wall broke off and the canoe fractured. The two women gamely raced anyway, coming in fifth place in that race, but the boat finally folded in half, making a "V" out of the "T."

The University of Rhode Island took first place in the regional competition against MIT and 12 other schools. The URI team will take its canoe, "Ramming Speed," to the nationals in June.

Despite the fact that 10 of the 11 MIT team members were novices (all but Ms. Dodd), they managed to place higher than the other four MIT teams that have participated in 11 years of the contest.

Ms. Dodd was a rower in the national finals of the Concrete Canoe Competition twice as an undergraduate at UCLA, but this was her first year to be involved in canoe design and construction. With no design alumni/ae to advise them, team members had to rely on their own ingenuity.

They built the canoe upside-down by placing three layers of fiberglass mesh and four layers of concrete over wooden scaffolding, then sanded and painted the finished product. Ms. Dodd estimates that they put in about 700 hours altogether. The finished "T" was 20 feet long, 28 inches wide and 9 inches deep, weighing in at 120 pounds.

Brian Hearing, a graduate student in CEE specializing in structural mechanics, and Tadatsugu Tamaki, another CEE construction management graduate student, were the concrete specialists. The final mix contained cement, water and polystyrene microspheres instead of the usual rock found in most concrete.

Other team members were John Murray, Chris Maury and Nina Harpoth, all construction management graduate students; Nilay Oza, a graduate student in architecture; Weslynne Ashton, a junior in CEE; and Stephanie Rosch, a CEE senior. Dr. Jack Germaine, principal research associate in CEE, served as the faculty advisor, and Professor Rafael Bras, head of the Department of Civil and Environmental Engineering, accompanied the students to the competition.

The team is already thinking about next year's canoe and trip to Vermont. "We'll start earlier -- I hope in September," said Nathaniel Grier, a CEE sophomore who has agreed to head up the 1999 team. "We'll need to make a new design and a new mold. And if I can find someone interested in playing with the concrete mix, that would be great."

Students interested in joining the team or faculty members willing to serve as advisors should contact Emily Dodd at mle@mit.edu or Nathaniel Grier at ngrier@mit.edu.

A version of this article appeared in MIT Tech Talk on May 6, 1998.