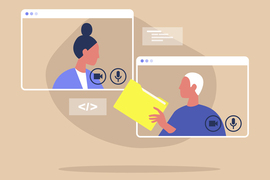 The debate over what is lost when remote work replaces an in-person workplace just got an infusion of much-needed data. According to a study conducted at MIT, when workers go remote, the types of work relationships that encourage innovation tend to be hard hit.

Two and a half years after Covid-19 shut down offices and research labs around the world, “we can finally use data to address a critical question: How did the pandemic-induced adoption of remote working affect our creativity and innovation on the job?” says Carlo Ratti, professor of the practice of urban technology and planning and director of MIT’s Senseable City Lab. “Until now, we could only guess. Today we can finally start to put real data behind those hypotheses.”

The MIT researchers, with colleagues at Texas A&M University, Italian National Research Council, Technical University of Denmark, and Oxford University, analyzed aspects of a de-identified email network comprising 2,834 MIT research staff, faculty, and postdoctoral researchers, for 18 months starting in December 2019. All of the emails were anonymized and examined to analyze the network structure of their origins and destinations, not their content.

Toward late March 2020, the Covid pandemic abruptly ended much of the on-site research on MIT’s campus. With the shift to remote work, the new study shows, email communications between different research units fell off, leading to a decrease in what researchers call the “weak ties” that undergird the exchange of new ideas that tend to foster innovation.

Weak ties were defined as any connection between two people who had no mutual contact in the email network. In other words, two people, A and B, formed a weak tie if there was no third person C that both of them also contacted. “Strong ties,” on the other hand, which are the type of communication that tends to expose us to the same ideas repeatedly, increased. Over the course of the lockdown, the researchers found that “ego networks,” referring to an individual's unique web of connections, became more stagnant, with contacts becoming more similar each week.

The study was published in the August 22 issue of Nature Computational Science.

The researchers hypothesized that physical proximity should play a role in the development of weak ties. As such, weak ties between researchers in physically distant labs, who would be unlikely to encounter each other by chance even when working on campus, should not have dropped significantly when workers went remote. The data turned out to support that hypothesis, the team reports.

“Our research shows that co-location is a crucial factor to foster weak ties,” says Paolo Santi, researcher at MIT’s Senseable City Lab and at the Italian National Research Council. “Our data showed that weak ties evaporated at MIT starting on March 23, 2020, with a 38 percent drop,” he says. Over the next 18 months, the drop translated into an estimated cumulative loss of more than 5,100 new weak ties.

The idea that “weak ties” are conducive to innovation dates back to research published in 1973 by sociologist Mark Granovetter, who wrote that “an initially unpopular innovation spread by those with few weak ties is more likely to be confined to a few cliques. … Individuals with many weak ties are, by my arguments, best placed to diffuse such a difficult innovation.” Granovetter’s research was “just the beginning of a vast literature in sociology, which has subsequently confirmed and substantiated his ideas,” Ratti says.

In an accompanying commentary article in Nature Computational Science, John Meluso of the University of Vermont calls the “weak ties” idea “one of the oldest theories in social networks,” while pointing out that what generates and maintains the ties has remained vague. He notes that the new study’s computational techniques shed light on the causal mechanism of “propinquity,” the idea that proximity increases the odds of creating new connections and strengthening existing ones.

The researchers investigated not only the abrupt decline in weak ties when the MIT campus was shut down, but also the transition when researchers began returning to campus on July 15, 2021. A partial reinstatement of weak ties occurred after that point, the team found. With these findings, the researchers created a model that predicted that a complete return to the workplace would result in a “complete recovery of weak ties.”

Ratti and his colleagues suggest that as companies and organizations refine their post-lockdown remote work policies, they should try to find ways to encourage serendipitous interactions across departments and research units to foster the spread of new and diverse information. As Ratti explains, those interactions create exposure for those involved to “a diverse set of people and ideas.” At the same time, the study authors acknowledged that remote or hybrid work offers advantages to individuals, especially in terms of flexibility.

“Employers would make a mistake in discarding the newfound flexibility of the Covid years,” Ratti says. “Our study hints at the fact that establishing a work balance trade-off by combining in-person and remote interactions among colleagues seems to be the optimal solution, which could inform the transition to a hybrid, post-Covid-19 ‘new normal.’”

Achieving that balance could involve modeling the minimum amount of in-person work needed to keep weak ties activated. It could also involve transforming traditional office floor plans designed for individual tasks into “more open, dynamic spaces that encourage the so-called cafeteria effect,” in which people from diverse groups sit and converse together, or event-based spaces for different communities to converge, Ratti says.

Paper: “The effect of co-location on human communication networks”

Writing for The Boston Globe, Prof. Carlo Ratti discusses his research exploring the impact of remote work on social relationships. “There does not need to be a complete return to the office; remote work has undeniable benefits, not least flexibility,” writes Ratti. “However, businesses and organizations must develop a new work regime, a methodology that emphasizes the best of what physical space can do for us.”

A better way to introduce digital tech in the workplace