Study: With masking and distancing in place, NFL stadium openings in 2020 had no impact on local Covid-19 infections 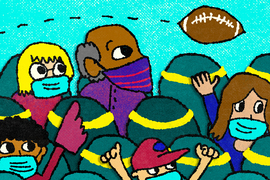 As with most everything in the world, football looked very different in 2020. As the Covid-19 pandemic unfolded, many National Football League (NFL) games were played in empty stadiums, while other stadiums opened to fans at significantly reduced capacity, with strict safety protocols in place.

At the time it was unclear what impact such large sporting events would have on Covid-19 case counts, particularly at a time when vaccination against the virus was not widely available.

Now, MIT engineers have taken a look back at the NFL’s 2020 regular season and found that for this specific period during the pandemic, opening stadiums to fans while requiring face coverings, social distancing, and other measures had no impact on the number of Covid-19 infections in those stadiums’ local counties.

As they write in a new paper appearing this week in the Proceedings of the National Academy of Sciences, “the benefits of providing a tightly controlled outdoor spectating environment — including masking and distancing requirements — counterbalanced the risks associated with opening.”

The study concentrates on the NFL’s 2020 regular season (September 2020 to early January 2021), at a time when earlier strains of the virus dominated, before the rise of more transmissible Delta and Omicron variants. Nevertheless, the results may inform decisions on whether and how to hold large outdoor gatherings in the face of future public health crises.

“These results show that the measures adopted by the NFL were effective in safely opening stadiums,” says study author Anette “Peko” Hosoi, the Neil and Jane Pappalardo Professor of Mechanical Engineering at MIT. “If case counts start to rise again, we know what to do: mask people, put them outside, and distance them from each other.”

The study’s co-authors are members of MIT’s Institue for Data, Systems, and Society (IDSS), and include Bernardo García Bulle, Dennis Shen, and Devavrat Shah, the Andrew and Erna Viterbi Professor in the Department of Electrical Engineering and Computer Science (EECS).

Last year a group led by the University of Southern Mississippi compared Covid-19 case counts in the counties of NFL stadiums that allowed fans in, versus those that did not. Their analysis showed that stadiums that opened to large numbers of fans led to “tangible increases” in the local county’s number of Covid-19 cases.

But there are a number of factors in addition to a stadium’s opening that can affect case counts, including local policies, mandates, and attitudes. As the MIT team writes, “it is not at all obvious that one can attribute the differences in case spikes to the stadiums given the enormous number of confounding factors.”

To truly isolate the effects of a stadium’s opening, one could imagine tracking Covid cases in a county with an open stadium through the 2020 season, then turning back the clock, closing the stadium, then tracking that same county’s Covid cases through the same season, all things being equal.

“That’s the perfect experiment, with the exception that you would need a time machine,” Hosoi says.

As it turns out, the next best thing is synthetic control — a statistical method that is used to determine the effect of an “intervention” (such as the opening of a stadium) compared with the exact same scenario without that intervention.

In synthetic control, researchers use a weighted combination of groups to construct a “synthetic” version of an actual  scenario. In this case, the actual scenario is a county such as Dallas that hosts an open stadium. A synthetic version would be a county that looks similar to Dallas, only without a stadium. In the context of this study, a county that “looks” like Dallas has a similar preseason pattern of Covid-19 cases.

To construct a synthetic Dallas, the researchers looked for surrounding counties without stadiums, that had similar Covid-19 trajectories leading up to the 2020 football season. They combined these counties in a way that best fit Dallas’ actual case trajectory. They then used data from the combined counties to calculate the number of Covid cases for this synthetic Dallas through the season, and compared these counts to the real Dallas.

The team carried out this analysis for every “stadium county.” They determined a county to be a stadium county if more than 10 percent of a stadium’s fans came from that county, which the researchers estimated based on attendance data provided by the NFL.

Of the stadiums included in the study, 13 were closed through the regular season, while 16 opened with reduced capacity and multiple pandemic requirements in place, such as required masking, distanced seating, mobile ticketing, and enhanced cleaning protocols.

The researchers found the trajectory of infections in all stadium counties mirrored that of synthetic counties, showing that the number of infections would have been the same if the stadiums had remained closed. In other words, they found no evidence that NFL stadium openings led to any increase in local Covid case counts.

To check that their method wasn’t missing any case spikes, they tested it on a known superspreader: the Sturgis Motorcycle Rally, which was held in August of 2020. The analysis successfully picked up an increase in cases in Meade, the host county, compared to a synthetic counterpart, in the two weeks following the rally.

Surprisingly, the researchers found that several stadium counties’ case counts dipped slightly compared to their synthetic counterparts. In these counties — including Hamilton, Ohio, home of the Cincinnati Bengals — it appeared that opening the stadium to fans was tied to a dip in Covid-19 infections. Hosoi has a guess as to why:

“These are football communities with dedicated fans. Rather than stay home alone, those fans may have gone to a sports bar or hosted indoor football gatherings if the stadium had not opened,” Hosoi proposes. “Opening the stadium under those circumstances would have been beneficial to the community because it makes people go outside.”

The team’s analysis also revealed another connection: Counties with similar Covid trajectories also shared similar politics. To illustrate this point, the team mapped the county-wide temporal trajectories of Covid case counts in Ohio in 2020 and found them to be a strong predictor of the state’s 2020 electoral map.

“That is not a coincidence,” Hosoi notes. “It tells us that local political leanings determined the temporal trajectory of the pandemic.”

The team plans to apply their analysis to see how other factors may have influenced the pandemic.

“From a policy perspective, while the results presented are specific to the data analyzed, this study suggests that large gatherings like football games might be held under similar conditions, including the prevalence of strains similar to early Covid-19 variants and the adoption of public health protocols (e.g., masking and distancing),” says Matias Cattaneo, professor of operations research and financial engineering at Princeton University, who was not involved in the research.

“Covid is a different beast [today],” she says. “Omicron is more transmissive, and more of the population is vaccinated. It’s possible we’d find something different if we ran this analysis on the upcoming season, and I think we probably should try.”

3 Questions: Peko Hosoi on the data-driven reasoning behind MIT’s Covid-19 policies for the fall

A data-driven response to a pandemic