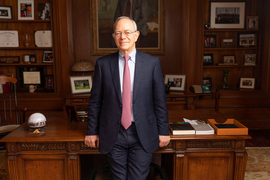 The National Academy of Engineering (NAE) has named MIT President L. Rafael Reif as the winner of its 2022 Simon Ramo Founders Award.

Reif, who has served at MIT’s president for more than 10 years, is being honored “for pioneering leadership to reimagine and advance higher education, university-based entrepreneurship, the future of computing, the future of work, sustainability and semiconductor technology,” according to the academy’s citation.

The Founders Award was established in 1965 by the NAE to honor an outstanding member or international member who has upheld the ideals and principles of the NAE through professional, educational, and personal achievement and accomplishment. Reif accepted the award on Sunday at the NAE annual meeting.

“I am delighted to be recognized by the National Academy of Engineering and its members because choosing to become an engineer was one of the most important decisions I ever made,” Reif said. “As a leader, one is often required to make important decisions under conditions of great uncertainty — which is exactly what engineering trains you to do.”

Reif joined MIT in 1980 as an assistant professor of electrical engineering and later served for seven years as provost, becoming MIT’s 17thpresident in 2012. He announced in February that he will step down from the role at the end of 2022.

As president, Reif led the Institute through a period of dynamic growth as well as novel challenges such as the Covid-19 pandemic. He oversaw the creation of an innovation ecosystem on campus and in Kendall Square, including the formation of “tough tech” accelerator The Engine; launched the MIT Schwarzman College of Computing to bring the power of computing and artificial intelligence to all fields of study; helped to reimagine the future of higher education through open-source online learning initiatives such as edX; and cleared new pathways for MIT scholars to develop solutions for addressing climate change.

Reif also promoted health and well-being among MIT students, faculty, and staff; championed MIT’s international community; and worked to revitalize the MIT campus. And, he convened MIT experts to deliver nationally significant reports on topics such the future of work and reasserting U.S. leadership in the semiconductor industry.

After he steps down as president, Reif will take a sabbatical, then return to the faculty of the Department of Electrical Engineering and Computer Science.

“We live in a moment when society is starving for principled, inspired, constructive leadership, in the face of immense global challenges,” Reif said in his acceptance remarks. “In a time of such tremendous need, I believe in the vision, potential and capacity to do good of the members of the National Academy of Engineering, and that includes all of you here tonight. And I trust you will each find many ways to contribute to move the needle in the right direction for the benefit of humankind.

“I am deeply fortunate to have been welcomed into this transformative profession so many years ago, and I am profoundly grateful for the immense honor of this truly wonderful award.”

Scene at MIT: Dancing the night away

L. Rafael Reif to step down as MIT president