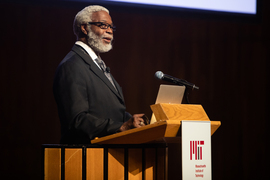 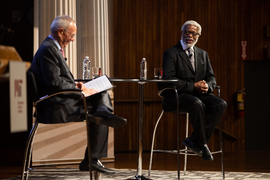 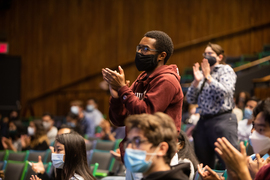 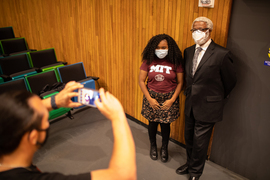 ↓ Download Image
Caption: Gates poses with a student after the lecture.
Credits: All images: Jake Belcher

Caption:
The audience reacts to Gates presentation during the event.
Credits:
All images: Jake Belcher

Caption:
Gates poses with a student after the lecture.
Credits:
All images: Jake Belcher

The reknowned theoretical physicist was the featured speaker for this year’s MIT Compton Lecture, and he spoke on Tuesday to an appreciative audience, gathered and masked, in Kresge Auditorium. During his address, he chronicled his 52-year career in research, teaching, and service. He also noted moments in history when progress toward advancing civil rights simultaneously surged forward and rolled back.

“Those of us who read history are not surprised by where we are now,” Gates said.

He noted that following the Civil War, between 1865 and 1876, African American representatives were elected for the first time to the U.S. Congress. But this democratic momentum was met with a racist backlash, and after 1876 fewer Black politicians were able to gain office.

Meanwhile, in the world of academia, 1876 also marked the year when the first African American scholar — Edward Alexander Bouchet — received a PhD from an American university. Bouchet happened to earn his PhD from Yale University, in physics.

“So, at the same time opportunities for democracy were closing here for people of the African diaspora, physics allowed people who looked like me to earn a doctorate,” Gates said.

Casting forward to the present day, he described the current political climate as “fraught” and filled with disagreement over “who should be the beneficiaries of democracy, and who should sustain their denigrations.” Amid all this political uncertainty, however, he said he sees signs of increasing academic opportunity. Gates, who is the son of a soldier who never had the chance to go to college, now has a son and daughter who are each pursuing graduate and postgraduate studies in physics.

In addressing the MIT audience, he hoped that “democracy itself, for all citizens of this country, will also be held dear, and we will fight for them as hard as we fight for our science, technology, engineering, and mathematics.”

Gates is the director of the Brown Theoretical Physics Center, the Ford Foundation Professor of Physics, an affiliate mathematics professor, and a faculty fellow at the Watson Institute for International and Public Affairs at Brown University. He is also the current president of the American Physical Society.

Prior to these appointments, Gates was a professor at the University of Maryland for 33 years. He has held a variety of positions in science and policy, and is the author of more than 200 research publications. He has appeared in a number of documentaries, and is the recipient of numerous awards, including the National Medal of Science, which was presented to him in 2013 by President Barack Obama.

In looking back at his career, Gates credited MIT as his “intellectual birthing ground,” where he earned two undergraduate degrees, in math and physics, and a PhD in physics.

“There is a saying that you can’t go home again. And yet today I must admit, I’ve been overwhelmed by the feeling of returning home,” Gates said.

In fact, his path to MIT started at home. When he was a child, he remembers his father asking him and his three younger siblings a question: What college do you plan to attend? His father had spent his own childhood on a sugarcane farm, then worked in the U.S. army for 27 years, never having had the opportunity to attend college himself.

“But he had an iron faith that education was the way to make progress for our family,” Gates said.

Gates first learned of MIT when he was 14. He was watching a television show, with a character who happened to be an MIT student. It left such an impression that Gates declared to his father that MIT was the college he wanted to attend. But as he recalled, “that dream almost never happened.”

He spent his high school years in Orlando, Florida, where “traditions in the South were very much enforced.” As such, Gates attended an all-Black high school and experienced the realities of inequality in education when he and his friends started a chess team. When they visited other high schools for matches, he saw the quality of everything, from the facilities, to the desks, and even the books — especially the books — was better than at his own school.

“So I understood inequity, and how I was born into a country where things get stacked against you according to race,” Gates said.

This experience made him hesitate in applying to MIT. But his father, remembering Gates’ early declaration, insisted. When the acceptance letter came, it was his father who gave him the news, while sitting on the family’s rocking couch.

“He was vigorously going back and forth, back and forth, and he looked up and saw me, and he smiled the biggest smile,” Gates said. “And that was my introduction to MIT — that very personal welcoming from my father, that my dream could come true.”

At MIT, Gates was one of the first to participate in Interphase, a program that still runs today and is designed to help ease students’ transition to MIT. His physics teacher in Interphase was Shirley Ann Jackson ’68, PhD ’73, who was the first African American woman to earn a PhD at MIT. He recalled going to see her about a less-than-stellar midterm.

“She said, ‘You know, Mr. Gates, your homework has been great, but this exam…’ And I blurted out, ‘But I want to be a physicist!’’ Gates said. “And I’ll never forget her response: ‘Oh, really?’”

This exchange, and Jackson’s continued support, spurred Gates on, even as the work “was harder than anything I had ever done before.” After earning two bachelor’s degrees in 1973, he returned to MIT for a PhD. His thesis advisor was James Edward Young, who in 1970 was the first African American to earn tenure in MIT’s physics department. Young gave Gates freedom to pick a thesis topic that no one knew anything about, and he chose supersymmetry. At his defense, Gates remembered committee member Ernest Moniz praising the exceptional thesis.

“And that was the kind of encouragement a kid who was first in his family to go to college, who winds up being at one of the toughest STEM meccas in the planet, needed to hear,” Gates said.

The confidence he gained at MIT helped Gates throughout his career, even as, later on, as a young assistant professor at the Institute, he struggled with the decision of whether to stay or go. At the time, he felt that MIT was not doing enough to promote and value diversity. After two years as a junior faculty member, he chose to leave, for the University of Maryland.

That assurance pushed Gates on to other new and challenging roles, including as a member of the President’s Council of Advisors on Science and Technology (PCAST).

“I’m a physicist — what do I know of policy at that level?” Gates recalled. “But I was not afraid of doing something I had never done before. MIT was in the back of my mind.”

Following his lecture, MIT President L. Rafael Reif asked Gates questions that had been submitted by audience members, including one seeking advice for faculty on what to look for in applicants to MIT. Gates, speaking from his experience, had this to offer:

“As scientists, when we make measurements, we have error bars, which is a reflection of how in the real world, we are imperfect,” Gates said. “So what I would say to faculty is, when you start looking at people and what they can contribute to our discipline, and you are using tools such as long tradition, and someone is telling you there are no error bars in those tools, you are making a fatal mistake, and likely overlooking possible talent.”

The Compton Lecture is an annual speaker series that features experts in a wide range of fields. The lecture was established in 1957 to honor Karl Taylor Compton, MIT’s ninth president and former chair of the MIT Corporation.

The drive for diversity