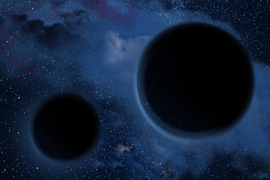 ↓ Download Image
Caption: As a supermassive black hole consumed a star, researchers were surprised it exhibited properties that were similar to that of much smaller, stellar-mass black holes.
Credits: Image: Christine Daniloff, MIT

Caption:
As a supermassive black hole consumed a star, researchers were surprised it exhibited properties that were similar to that of much smaller, stellar-mass black holes.
Credits:
Image: Christine Daniloff, MIT

On Sept. 9, 2018, astronomers spotted a flash from a galaxy 860 million light years away. The source was a supermassive black hole about 50 million times the mass of the sun. Normally quiet, the gravitational giant suddenly awoke to devour a passing star in a rare instance known as a tidal disruption event. As the stellar debris fell toward the black hole, it released an enormous amount of energy in the form of light.

Researchers at MIT, the European Southern Observatory, and elsewhere used multiple telescopes to keep watch on the event, labeled AT2018fyk. To their surprise, they observed that as the supermassive black hole consumed the star, it exhibited properties that were similar to that of much smaller, stellar-mass black holes.

The results, published today in the Astrophysical Journal, suggest that accretion, or the way black holes evolve as they consume material, is independent of their size.

“We’ve demonstrated that, if you’ve seen one black hole, you’ve seen them all, in a sense,” says study author Dheeraj “DJ” Pasham, a research scientist in MIT’s Kavli Institute for Astrophysics and Space Research. “When you throw a ball of gas at them, they all seem to do more or less the same thing. They’re the same beast in terms of their accretion.”

When small stellar-mass black holes with a mass about 10 times our sun emit a burst of light, it’s often in response to an influx of material from a companion star. This outburst of radiation sets off a specific evolution of the region around the black hole. From quiescence, a black hole transitions into a “soft” phase dominated by an accretion disk as stellar material is pulled into the black hole. As the amount of material influx drops, it transitions again to a “hard” phase where a white-hot corona takes over. The black hole eventually settles back into a steady quiescence, and this entire accretion cycle can last a few weeks to months.

Physicists have observed this characteristic accretion cycle in multiple stellar-mass black holes for several decades. But for supermassive black holes, it was thought that this process would take too long to capture entirely, as these goliaths are normally grazers, feeding slowly on gas in the central regions of a galaxy.

“This process normally happens on timescales of thousands of years in supermassive black holes,” Pasham says. “Humans cannot wait that long to capture something like this.”

But this entire process speeds up when a black hole experiences a sudden, huge influx of material, such as during a tidal disruption event, when a star comes close enough that a black hole can tidally rip it to shreds.

“In a tidal disruption event, everything is abrupt,” Pasham says. “You have a sudden chunk of gas being thrown at you, and the black hole is suddenly woken up, and it’s like, ‘whoa, there’s so much food — let me just eat, eat, eat until it’s gone.’ So, it experiences everything in a short timespan. That allows us to probe all these different accretion stages that people have known in stellar-mass black holes.”

In September 2018, the All-Sky Automated Survey for Supernovae (ASASSN) picked up signals of a sudden flare. Scientists subsequently determined that the flare was the result of a tidal disruption event involving a supermassive black hole, which they labeled TDE AT2018fyk. Wevers, Pasham, and their colleagues jumped at the alert and were able to steer multiple telescopes, each trained to map different bands of the ultraviolet and X-ray spectrum, toward the system.

The team collected data over two years, using X-ray space telescopes XMM-Newton and the Chandra X-Ray Observatory, as well as NICER, the X-ray-monitoring instrument aboard the International Space Station, and the Swift Observatory, along with radio telescopes in Australia.

“We caught the black hole in the soft state with an accretion disk forming, and most of the emission in ultraviolet, with very few in the X-ray,” Pasham says. “Then the disk collapses, the corona gets stronger, and now it’s very bright in X-rays. Eventually there’s not much gas to feed on, and the overall luminosity drops and goes back to undetectable levels.”

The researchers estimate that the black hole tidally disrupted a star about the size of our sun. In the process, it generated an enormous accretion disk, about 12 billion kilometers wide, and emitted gas that they estimated to be about 40,000 Kelvin, or more than 70,000 degrees Fahrenheit. As the disk became weaker and less bright, a corona of compact, high-energy X-rays took over as the dominant phase around the black hole before eventually fading away.

“People have known this cycle to happen in stellar-mass black holes, which are only about 10 solar masses. Now we are seeing this in something 5 million times bigger,” Pasham says.

“The most exciting prospect for the future is that such tidal disruption events provide a window into the formation of complex structures very close to the supermassive black hole such as the accretion disk and the corona,” says lead author Thomas Wevers, a fellow at the European Southern Observatory. “Studying how these structures form and interact in the extreme environment following the destruction of a star, we can hopefully start to better understand the fundamental physical laws that govern their existence.”

In addition to showing that black holes experience accretion in the same way, regardless of their size, the results represent only the second time that scientists have captured the formation of a corona from beginning to end.

“A corona is a very mysterious entity, and in the case of supermassive black holes, people have studied established coronas but don’t know when or how they formed,” Pasham says. “We’ve demonstrated you can use tidal disruption events to capture corona formation. I’m excited about using these events in the future to figure out what exactly is the corona.”

Axios reporter Miriam Kramer writes that a new study co-authored by MIT researchers suggests that all black holes go through a similar cycle when feeding, whether they are big or small. “Black holes are some of the most extreme objects found in our universe,” writes Kramer. “By studying the way they grow, scientists should be able to piece together more about how they work.”

Boston Globe reporter Charlie McKenna writes that a new study co-authored by MIT researchers finds that the way black holes evolve as they consume material is the same, no matter their size. “What we’re demonstrating is, if you look at the properties of a supermassive black hole in the cycle, those properties are very much like a stellar-mass black hole,” says research scientist Dheeraj “DJ” Pasham. The findings mean “black holes are simple, and elegant in a sense.”

Academic Times reporter Monisha Ravisetti writes that a new study by physicists from a number of institutions, including MIT, finds that supermassive black holes devour gas just like their smaller counterparts. “This is demonstrating that, essentially, all black holes behave the same way,” says research scientist Dheeraj “DJ” Pasham. “It doesn’t matter if it’s a 10 solar mass black hole or a 50 million solar mass black hole – they appear to be acting the same way when you throw a ball of gas at it.”

Full story via The Academic Times →