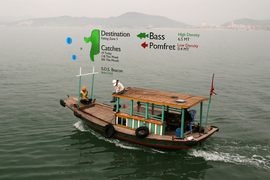 On Nov. 26, seven fishermen aboard a small fishing boat off the coast of Maharashtra in western India were struck with panic when their vessel was damaged and began to sink. The panic was warranted: The boat was too far from shore to radio for help.

Tens of thousands of fishermen find themselves in a similar situation around the world every year. Globally, the vast majority of small, deep-sea fishing vessels do their work totally disconnected, leaving them vulnerable to storms and other disasters.

At the root of the problem is the high cost of satellite connectivity in areas like oceans, forests, and mountains, which make up the majority of the Earth’s landmass. Now the startup Skylo, co-founded by Parth Trivedi SM ’14, is offering the ability to communicate with satellites from anywhere on the planet for less than 10 dollars a month.

Skylo’s team has developed a new antenna and communication protocol that allows machines, sensors, and other devices to efficiently transmit data to the geostationary satellites already deployed in space. The company says its technology enables satellite communications at less than 5 percent of the cost of existing solutions and could bring an “internet of things” revolution in the world’s most remote regions.

With the Skylo Hub, which resembles a modem and contains the company’s proprietary antennae, deep-sea fishermen can go from being isolated and vulnerable to having the ability to send out emergency communications, receive storm alerts, and even sell their catch before they return to port. Farmers in remote regions can get real-time data on weather forecasts, soil content, and crop health. Truck drivers and fleet operators that were previously invisible for large stretches of their journeys can be precisely located and their cargo monitored.

Skylo is currently being used on trucks, fishing vessels, tractors, and train coaches across India and its surrounding oceans as part of a partnership with the country’s government-owned telecommunications provider. Later this year, the company’s leadership team is planning to expand to other regions of the world.

As for the fishermen in the sinking ship, their screams were heard by another small boat that happened to be piloting Skylo’s two-way communication technology. They sent an emergency alert to the Maharashtra Coastal Security, who got the sinking boat’s exact location and was able to make a rescue. According to Trivedi, who is also the company’s CEO, it was the third boat Skylo helped save in 2020.

Trivedi worked on new approaches to sustainable innovation in aviation as a graduate student in MIT’s Department of Aeronautics and Astronautics. He calls his time at MIT “the most exciting of my life.”

“MIT really shaped the way I think and allowed me to break down extremely complex problems in space and other subjects into first principles,” Trivedi says.

Trivedi also developed algorithms to determine the optimal use of land by analyzing satellite data, helping him appreciate how disparate data sources “can be used to create rich insights.”

Trivedi was pursuing his MBA at Stanford University when he began exploring the business opportunity in the difference between the kinds of data humans and machines send and receive from satellites.

“If I just want to send a heartbeat from a tractor, I shouldn’t have to pay the same rate I’m paying for broadband service from a cruise ship, which is exactly how it is today, unfortunately,” Trivedi says.

Trivedi and his research collaborators proposed a different kind of network that would leverage narrowband communication protocols, which can send data over long distances more efficiently than broadband and are already used between connected devices on Earth. The system would work with the geostationary satellites already in space and use specialized antennae made from cellular components, dramatically reducing hardware costs for customers.

In 2017, Trivedi founded Skylo with three members of his research team, but the founders stayed off the public radar as they developed Skylo’s technology and established partnerships with satellite companies.

In January of 2020, Skylo raised $103 million to commercially deploy its technology, beginning trials with public and private companies in India in sectors including fishing, farming, logistics, and railways.

As Trivedi spoke with potential customers about how they could use the technology, the massive array of use cases they came up with helped him appreciate how impactful Skylo’s network could be.

Fulfilling the promise of IoT

As part of Skylo’s early work with the Indian government, the company helped the election commission collect votes from remote villages, a process Trivedi says can require officials to hike for three days on unmotorable roads.

In the northeast Indian region of Shella, polling stations used Skylo to communicate directly with election headquarters. Under the more efficient system, officials were able to securely coordinate and manage their on-ground operations in remote villages that were previously unconnected.

Newfound satellite connectivity will also be critical for health care operations in remote regions, and Trivedi says Skylo has already developed a data interface for tracking the temperature of Covid-19 vaccines as they’re transported.

Skylo’s team is focused on selling commercially in India right now, but Trivedi says the only thing preventing the company from expanding is that each country has different requirements for selling satellite services. The company, headquartered in the U.S., also has offices in India, Israel, and Finland.

“Broadly speaking, two-thirds of landmass is unconnected or under-connected,” Trivedi says. “That’s because when you’re building a telecom network, you’re trying to connect 99 percent of populations as opposed to connecting geography, so machines get left out. Skylo is mobilizing data from places and equipment and machines that were never connected before, that were in geographies that could not have been affordably connected before.”