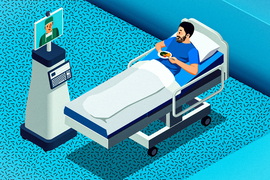 ↓ Download Image
Caption: A majority of patients interacting with a health care provider via a video screen mounted on a robot said it was similar to an in-person interaction with a health care worker.
Credits: Image: MIT News, with images from iStockphoto 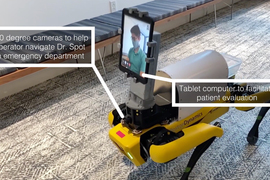 ↓ Download Image
Caption: Patients were interviewed about their symptoms via video connection, using an iPad carried by a quadruped robot developed by Boston Dynamics.
Credits: Photo courtesy of the researchers

Caption:
Patients were interviewed about their symptoms via video connection, using an iPad carried by a quadruped robot developed by Boston Dynamics.
Credits:
Photo courtesy of the researchers

In the era of social distancing, using robots for some health care interactions is a promising way to reduce in-person contact between health care workers and sick patients. However, a key question that needs to be answered is how patients will react to a robot entering the exam room.

Researchers from MIT and Brigham and Women’s Hospital recently set out to answer that question. In a study performed in the emergency department at Brigham and Women’s, the team found that a large majority of patients reported that interacting with a health care provider via a video screen mounted on a robot was similar to an in-person interaction with a health care worker.

“We’re actively working on robots that can help provide care to maximize the safety of both the patient and the health care workforce. The results of this study give us some confidence that people are ready and willing to engage with us on those fronts,” says Giovanni Traverso, an MIT assistant professor of mechanical engineering, a gastroenterologist at Brigham and Women’s Hospital, and the senior author of the study.

In a larger online survey conducted nationwide, the researchers also found that a majority of respondents were open to having robots not only assist with patient triage but also perform minor procedures such as taking a nose swab.

Peter Chai, an assistant professor of emergency medicine at Brigham and Women’s Hospital and a research affiliate in Traverso’s lab, is the lead author of the study, which appears today in JAMA Network Open.

After the Covid-19 pandemic began early last year, Traverso and his colleagues turned their attention toward new strategies to minimize interactions between potentially sick patients and health care workers. To that end, they worked with Boston Dynamics to create a mobile robot that could interact with patients as they waited in the emergency department. The robots were equipped with sensors that allow them to measure vital signs, including skin temperature, breathing rate, pulse rate, and blood oxygen saturation. The robots also carried an iPad that allowed for remote video communication with a health care provider. 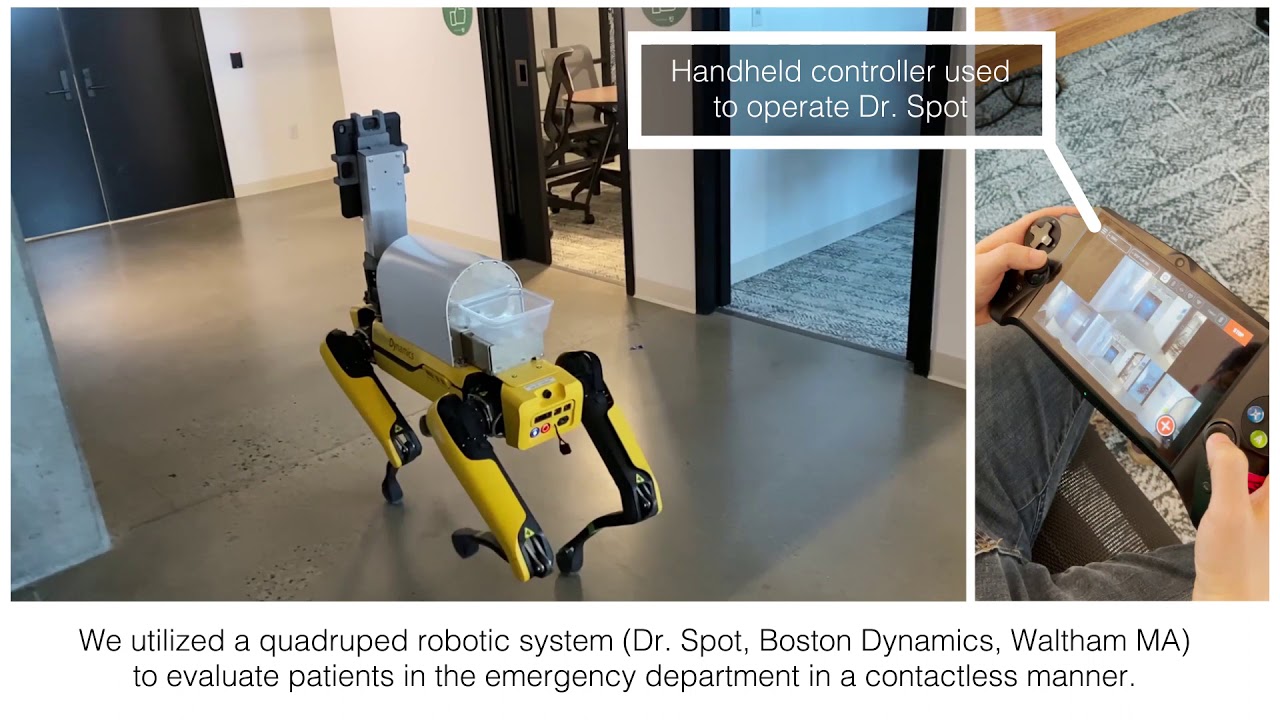 This kind of robot could reduce health care workers’ risk of exposure to Covid-19 and help to conserve the personal protective equipment that is needed for each interaction. However, the question still remained whether patients would be receptive to this type of interaction.

“Often as engineers, we think about different solutions, but sometimes they may not be adopted because people are not fully accepting of them,” Traverso says. “So, in this study we were trying to tease that out and understand if the population is receptive to a solution like this one.”

The researchers first conducted a nationwide survey of about 1,000 people, working with a market research company called YouGov. They asked questions regarding the acceptability of robots in health care, including whether people would be comfortable with robots performing not only triage but also other tasks such as performing nasal swabs, inserting a catheter, or turning a patient over in bed. On average, the respondents stated that they were open to these types of interactions.

The researchers then tested one of their robots in the emergency department at Brigham and Women’s Hospital last spring, when Covid-19 cases were surging in Massachusetts. Fifty-one patients were approached in the waiting room or a triage tent and asked if they would be willing to participate in the study, and 41 agreed. These patients were interviewed about their symptoms via video connection, using an iPad carried by a quadruped, dog-like robot developed by Boston Dynamics. More than 90 percent of the participants reported that they were satisfied with the robotic system.

“For the purposes of gathering quick triage information, the patients found the experience to be similar to what they would have experienced talking to a person,” Chai says.

The numbers from the study suggest that it could be worthwhile to try to develop robots that can perform procedures that currently require a lot of human effort, such as turning a patient over in bed, the researchers say. Turning Covid-19 patients onto their stomachs, also known as “proning,” has been shown to boost their blood oxygen levels and make breathing easier. Currently the process requires several people to perform. Administering Covid-19 tests is another task that requires a lot of time and effort from health care workers, who could be deployed for other tasks if robots could help perform swabs.

“Surprisingly, people were pretty accepting of the idea of having a robot do a nasal swab, which suggests that potential engineering efforts could go into thinking about building some of these systems,” Chai says.

The MIT team is continuing to develop sensors that can obtain vital sign data from patients remotely, and they are working on integrating these systems into smaller robots that could operate in a variety of environments, such as field hospitals or ambulances.

Paper: "Assessment of the Acceptability and Feasibility of Using Mobile Robotic Systems for Patient Evaluation"

Researchers from MIT and Brigham and Women’s Hospital have developed a robotic dog outfitted with a tablet that allows doctors to visit with emergency room patients remotely. “The robot could therefore avoid the risk of exposure to Covid-19 by healthcare professionals and help save the personal protective equipment necessary for each visit,” writes Ruggiero Corcella of Corriere della Sera.

Prof. Gio Traverso speaks with CNN’s Jeanne Moos about his new study examining how comfortable patients were interacting with Dr. Spot, a robotic dog outfitted with a computer tablet that allows ER doctors to engage with patients remotely. “The robot looks like a dog, and dogs are endearing to many, so actually, the reception was very positive,” said Traverso.

NY Post reporter Asia Grace writes that MIT researchers have found that patients are comfortable with allowing robotic assistants perform medical evaluations, as part of an effort to help reduce the spread of Covid-19. “People are very positive and accepting of robotic systems in health-care settings, particularly during the pandemic,” says Prof. Giovanni Traverso.