Caption:
A robotic arm setup is equipped with a sensorized soft brush and aided by a camera to study the complex nature of manipulating and brushing hair fibers.
Credits:
Photo courtesy of MIT CSAIL.

With rapidly growing demands on health care systems, nurses typically spend 18 to 40 percent of their time performing direct patient care tasks, oftentimes for many patients and with little time to spare. Personal care robots that brush hair could provide substantial help and relief.

This may seem like a truly radical form of “self-care,” but crafty robots for things like shaving, hair-washing, and makeup are not new. In 2011, the tech giant Panasonic developed a robot that could wash, massage, and even blow-dry hair, explicitly designed to help support “safe and comfortable living of the elderly and people with limited mobility, while reducing the burden of caregivers.”

Hair-combing bots, however, proved to be less explored, leading scientists from MIT’s Computer Science and Artificial Intelligence Laboratory (CSAIL) and the Soft Math Lab at Harvard University to develop a robotic arm setup with a sensorized soft brush. The robot is equipped with a camera that helps it “see” and assess curliness, so it can plan a delicate and time-efficient brush-out. 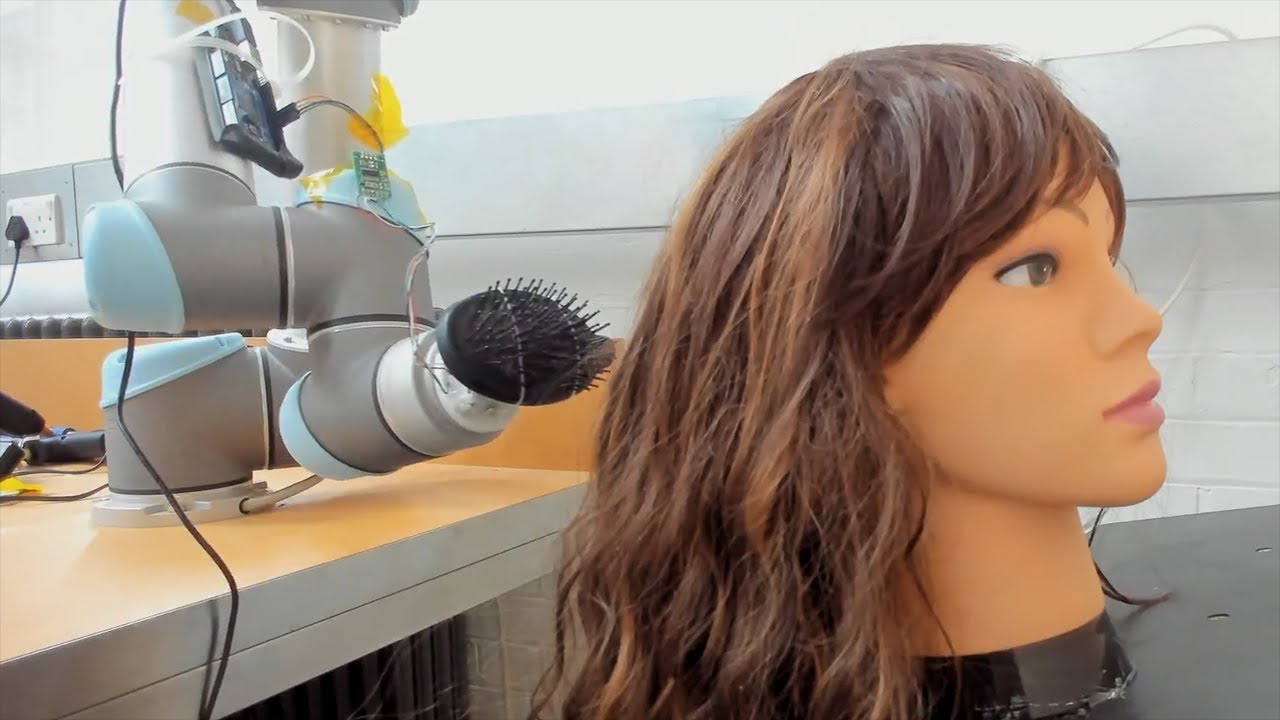 The team's control strategy is adaptive to the degree of tangling in the fiber bunch, and they put “RoboWig” to the test by brushing wigs ranging from straight to very curly hair.

While the hardware setup of RoboWig looks futuristic and shiny, the underlying model of the hair fibers is what makes it tick. CSAIL postdoc Josie Hughes and her team opted to represent the entangled hair as sets of entwined double helices —  think classic DNA strands. This level of granularity provided key insights into mathematical models and control systems for manipulating bundles of soft fibers, with a wide range of applications in the textile industry, animal care, and other fibrous systems.

“By developing a model of tangled fibers, we understand from a model-based perspective how hairs must be entangled: starting from the bottom and slowly working the way up to prevent 'jamming' of the fibers,” says Hughes, the lead author on a paper about RoboWig. “This is something everyone who has brushed hair has learned from experience, but is now something we can demonstrate through a model, and use to inform a robot.”

This task at hand is a tangled one. Every head of hair is different, and the intricate interplay between hairs when combing can easily lead to knots. What’s more, if the incorrect brushing strategy is used, the process can be very painful and damaging to the hair.

Previous research in the brushing domain has mostly been on the mechanical, dynamic, and visual properties of hair, as opposed to RoboWig’s refined focus on tangling and combing behavior.

To brush and manipulate the hair, the researchers added a soft-bristled sensorized brush to the robot arm, to allow forces during brushing to be measured. They combined this setup with something called a “closed-loop control system,” which takes feedback from an output and automatically performs an action without human intervention. This created “force feedback” from the brush — a control method that lets the user feel what the device is doing — so the length of the stroke could be optimized to take into account both the potential “pain,” and time taken to brush.

Initial tests preserved the human head — for now — and instead were done on a number of wigs of various hair styles and types. The model provided insight into the behaviors of the combing, related to the number of entanglements, and how those could be efficiently and effectively brushed out by choosing appropriate brushing lengths. For example, for curlier hair, the pain cost would dominate, so shorter brush lengths were optimal.

The team wants to eventually perform more realistic experiments on humans, to better understand the performance of the robot with respect to their experience of pain — a metric that is obviously highly subjective, as one person’s “two” could be another’s “eight.”

“To allow robots to extend their task-solving abilities to more complex tasks such as hair brushing, we need not only novel safe hardware, but also an understanding of the complex behavior of the soft hair and tangled fibers,” says Hughes. “In addition to hair brushing, the insights provided by our approach could be applied to brushing of fibers for textiles, or animal fibers.”

The project was supported, in part, by the National Science Foundation's Emerging Frontiers in Research and Innovation program between MIT CSAIL and the Soft Math Lab at Harvard.

CSAIL researchers have developed a robotic arm equipped with a sensorized soft brush that can untangle hair, reports Douglas Belkin for The Wall Street Journal. “The laboratory brush is outfitted with sensors that detect tension," writes Belkin. “That tension reads as pain and is used to determine whether to use long strokes or shorter ones.”

Why shaving dulls even the sharpest of razors