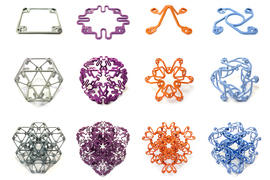 Researchers at MIT’s Center for Bits and Atoms have created tiny building blocks that exhibit a variety of unique mechanical properties, such as the ability to produce a twisting motion when squeezed. These subunits could potentially be assembled by tiny robots into a nearly limitless variety of objects with built-in functionality, including vehicles, large industrial parts, or specialized robots that can be repeatedly reassembled in different forms.

The researchers created four different types of these subunits, called voxels (a 3D variation on the pixels of a 2D image). Each voxel type exhibits special properties not found in typical natural materials, and in combination they can be used to make devices that respond to environmental stimuli in predictable ways. Examples might include airplane wings or turbine blades that respond to changes in air pressure or wind speed by changing their overall shape.

The findings, which detail the creation of a family of discrete “mechanical metamaterials,” are described in a paper published today in the journal Science Advances, authored by recent MIT doctoral graduate Benjamin Jenett PhD ’20, Professor Neil Gershenfeld, and four others.

“This remarkable, fundamental, and beautiful synthesis promises to revolutionize the cost, tailorability, and functional efficiency of ultralight, materials-frugal structures,” says Amory Lovins, an adjunct professor of civil and environmental engineering at Stanford University and founder of Rocky Mountain Institute, who was not associated with this work.

Metamaterials get their name because their large-scale properties are different from the microlevel properties of their component materials. They are used in electromagnetics and as “architected” materials, which are designed at the level of their microstructure. “But there hasn’t been much done on creating macroscopic mechanical properties as a metamaterial,” Gershenfeld says.

With this approach, engineers should be able to build structures incorporating a wide range of material properties — and produce them all using the same shared production and assembly processes, Gershenfeld says.

The voxels are assembled from flat frame pieces of injection-molded polymers, then combined into three-dimensional shapes that can be joined into larger functional structures. They are mostly open space and thus provide an extremely lightweight but rigid framework when assembled. Besides the basic rigid unit, which provides an exceptional combination of strength and light weight, there are three other variations of these voxels, each with a different unusual property.

The “auxetic” voxels have a strange property in which a cube of the material, when compressed, instead of bulging out at the sides, actually bulges inward. This is the first demonstration of such a material produced through conventional and inexpensive manufacturing methods.

There are also “compliant” voxels, with a zero Poisson ratio, which is somewhat similar to the auxetic property, but in this case, when the material is compressed, the sides do not change shape at all. Few known materials exhibit this property, which can now be produced through this new approach.

Finally, “chiral” voxels respond to axial compression or stretching with a twisting motion. Again, this is an uncommon property; research that produced one such material through complex fabrication techniques was hailed last year as a significant finding. This work makes this property easily accessible at macroscopic scales.

“Each type of material property we’re showing has previously been its own field,” Gershenfeld says. “People would write papers on just that one property. This is the first thing that shows all of them in one single system.”

To demonstrate the real-world potential of large objects constructed in a LEGO-like manner out of these mass-produced voxels, the team, working in collaboration with engineers at Toyota, produced a functional super-mileage race car, which they demonstrated on a race track during an international robotics conference earlier this year.

They were able to assemble the lightweight, high-performance structure in just a month, Jenett says, whereas building a comparable structure using conventional fiberglass construction methods had previously taken a year.

During the race, the track was slick from rain, and the race car ended up crashing into a barrier. To the surprise of everyone involved, the car’s lattice-like internal structure deformed and then bounced back, absorbing the shock with little damage. A conventionally built car, Jenett says, would likely have been severely dented if it was made of metal, or shattered if it was composite.

The car provided a vivid demonstration of the fact that these tiny parts can indeed be used to make functional devices at human-sized scales. And, Gershenfeld points out, in the structure of the car, “these aren’t parts connected to something else. The whole thing is made out of nothing but these parts,” except for the motors and power supply.

Because the voxels are uniform in size and composition, they can be combined in any way needed to provide different functions for the resulting device. “We can span a wide range of material properties that before now have been considered very specialized,” Gershenfeld says. “The point is that you don’t have to pick one property. You can make, for example, robots that bend in one direction and are stiff in another direction and move only in certain ways. And so, the big change over our earlier work is this ability to span multiple mechanical material properties, that before now have been considered in isolation.”

Jenett, who carried out much of this work as the basis for his doctoral thesis, says “these parts are low-cost, easily produced, and very fast to assemble, and you get this range of properties all in one system. They’re all compatible with each other, so there’s all these different types of exotic properties, but they all play well with each other in the same scalable, inexpensive system.”

“Think about all the rigid parts and moving parts in cars and robots and boats and planes,” Gershenfeld says. “And we can span all of that with this one system.”

A key factor is that a structure made up of one type of these voxels will behave exactly the same way as the subunit itself, Jenett says. “We were able to demonstrate that the joints effectively disappear when you assemble the parts together. It behaves as a continuum, monolithic material.”

Whereas robotics research has tended to be divided between hard and soft robots, “this is very much neither,” Gershenfeld says, because of its potential to mix and match these properties within a single device.

One of the possible early applications of this technology, Jenett says, could be for building the blades of wind turbines. As these structures become ever larger, transporting the blades to their operating site becomes a serious logistical issue, whereas if they are assembled from thousands of tiny subunits, that job can be done at the site, eliminating the transportation issue. Similarly, the disposal of used turbine blades is already becoming a serious problem because of their large size and lack of recyclability. But blades made up of tiny voxels could be disassembled on site, and the voxels then reused to make something else.

And in addition, the blades themselves could be more efficient, because they could have a mix of mechanical properties designed into the structure that would allow them to respond dynamically, passively, to changes in wind strength, he says.

Overall, Jenett says, “Now we have this low-cost, scalable system, so we can design whatever we want to. We can do quadrupeds, we can do swimming robots, we can do flying robots. That flexibility is one of the key benefits of the system.”

Stanford’s Lovins says that this technology “could make inexpensive, durable, extraordinarily lightweight aeronautical flight surfaces that passively and continuously optimize their shape like a bird’s wing. It could also make automobiles' empty mass more nearly approach their payload, as their crashworthy structure becomes mostly air. It may even permit spherical shells whose crush strength allows a vacuum balloon (with no helium) buoyant in the atmosphere to lift a couple of dozen times the net payload of a jumbo jet.”

He adds, “Like biomimicry and integrative design, this new art of cellular metamaterials is a powerful new tool for helping us do more with less.”