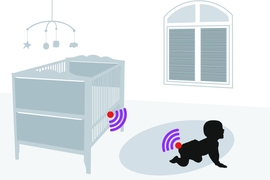 ↓ Download Image
Caption: A new disposable, affordable “smart” diaper embedded with an RFID tag is designed by MIT researchers to sense and communicate wetness to a nearby RFID reader, which in turn can wirelessly send a notification to a caregiver that it’s time for a change.
Credits: Image: MIT News

Caption:
A new disposable, affordable “smart” diaper embedded with an RFID tag is designed by MIT researchers to sense and communicate wetness to a nearby RFID reader, which in turn can wirelessly send a notification to a caregiver that it’s time for a change.
Credits:
Image: MIT News

For some infants, a wet diaper is cause for an instant, vociferous demand to be changed, while other babies may be unfazed and happy to haul around the damp cargo for lengthy periods without complaint. But if worn too long, a wet diaper can cause painful rashes, and miserable babies — and parents.

Now MIT researchers have developed a “smart” diaper embedded with a moisture sensor that can alert a caregiver when a diaper is wet. When the sensor detects dampness in the diaper, it sends a signal to a nearby receiver, which in turn can send a notification to a smartphone or computer.

The sensor consists of a passive radio frequency identification (RFID) tag, that is placed below a layer of super absorbent polymer, a type of hydrogel that is typically used in diapers to soak up moisture. When the hydrogel is wet, the material expands and becomes slightly conductive — enough to trigger the RFID tag to send a radio signal to an RFID reader up to 1 meter away.

The researchers say the design is the first demonstration of hydrogel as a functional antenna element for moisture sensing in diapers using RFID. They estimate that the sensor costs less than 2 cents to manufacture, making it a low-cost, disposable alternative to other smart diaper technology.

Over time, smart diapers may help record and identify certain health problems, such as signs of constipation or incontinence. The new sensor may be especially useful for nurses working in neonatal units and caring for multiple babies at a time.

Pankhuri Sen, a research assistant in MIT’s AutoID Laboratory, envisions that the sensor could also be integrated into adult diapers, for patients who might be unaware or too embarrassed to report themselves that a change is needed.

“Diapers are used not just for babies, but for aging populations, or patients who are bedridden and unable to take care of themselves,” Sen says. “It would be convenient in these cases for a caregiver to be notified that a patient, particularly in a multibed hospital, needs changing.”

“This could prevent rashes and some infections like urinary tract infections, in both aging and infant populations,” adds collaborator Sai Nithin R. Kantareddy, a graduate student in MIT’s Department of Mechanical Engineering.

Sen, Kantareddy, and their colleagues at MIT, including Rahul Bhattacharryya and Sanjay Sarma, along with Joshua Siegel at Michigan State University, have published their results today in the journal IEEE Sensors. Sarma is MIT’s vice president  for open learning and the Fred Fort Flowers and Daniel Fort Flowers Professor of Mechanical Engineering.

Many off-the-shelf diapers incorporate wetness indicators in the form of strips, printed along the outside of a diaper, that change color when wet — a design that usually requires removing multiple layers of clothing to be able to see the actual diaper.

Companies looking into smart diaper technology are considering wetness sensors that are wireless or Bluetooth-enabled, with devices that attach to a diaper’s exterior, along with bulky batteries to power long-range connections to the internet. These sensors are designed to be reusable, requiring a caregiver to remove and clean the sensor before attaching it to each new diaper. Current sensors being explored for smart diapers, Sen estimates, retail for over $40.

RFID tags in contrast are low-cost and disposable, and can be printed in rolls of individual stickers, similar to barcode tags. MIT’s AutoID Laboratory, founded by Sarma, has been at the forefront of RFID tag development, with the goal of using them to connect our physical world with the internet.

A typical RFID tag has two elements: an antenna for backscattering radio frequency signals, and an RFID chip that stores the tag’s information, such as the specific product that the tag is affixed to. RFID tags don’t require batteries; they receive energy in the form of radio waves emitted by an RFID reader. When an RFID tag picks up this energy, its antenna activates the RFID chip, which tweaks the radio waves and sends a signal back to the reader, with its information encoded within the waves. This is how, for instance, products labeled with RFID tags can be identified and tracked.

Sarma’s group has been enabling RFID tags to work not just as wireless trackers, but also as sensors. Most recently, as part of MIT’s Industrial Liason Program, the team started up a collaboration with Softys, a diaper manufacturer based in South America, to see how RFID tags could be configured as low-cost, disposable wetness detectors in diapers. The researchers visited one of the company’s factories to get a sense of the machinery and assembly involved in diaper manufacturing, then came back to MIT to design a RFID sensor that might reasonably be integrated within the diaper manufacturing process.

The design they came up with can be incorporated in the bottom layer of a typical diaper. The sensor itself resembles a bow tie, the middle of which consists of a typical RFID chip connecting the bow tie’s two triangles, each made from the hydrogel super absorbent polymer, or SAP.

Normally, SAP is an insulating material, meaning that it doesn’t conduct current. But when the hydrogel becomes wet, the researchers found that the material properties change and the hydrogel becomes conductive. The conductivity is very weak, but it’s enough to react to any radio signals in the environment, such as those emitted by an RFID reader. This interaction generates a small current that turns on the sensor’s chip, which then acts as a typical RFID tag, tweaking and sending the radio signal back to the reader with information — in this case, that the diaper is wet.

The researchers found that by adding a small amount of copper to the sensor, they could boost the sensor’s conductivity and therefore the range at which the tag can communicate to a reader, reaching more than 1 meter away.

To test the sensor’s performance, they placed a tag within the bottom layers of newborn-sized diapers and wrapped each diaper around a life-sized baby doll, which they filled with saltwater whose conductive properties were similar to human bodily fluids. They placed the dolls at various distances from an RFID reader, at various orientations, such as lying flat versus sitting upright. They found that the particular sensor they designed to fit into newborn-sized diapers was able to activate and communicate to a reader up to 1 meter away when the diaper was fully wet.

Sen envisions that an RFID reader connected to the internet could be placed in a baby’s room to detect wet diapers, at which point it could send a notification to a caregiver’s phone or computer that a change is needed. For geriatric patients who might also benefit from smart diapers, she says small RFID readers may even be attached to assistive devices, such as canes and wheelchairs to pick up a tag’s signals.

This research was supported in part by Softys under the MIT Industry Liason Program.

Boston 25’s Chris Flanagan visits MIT to learn about how researchers developed a smart diaper that alerts caregivers when moisture is detected. “It can help in identifying skin hydration and prevent rashes from happening on the skin because, if the diaper is left on for too long, it can lead to skin rashes," says research associate Pankhuri Sen.

Verge reporter Thomas Ricker writes that MIT researchers have developed a new RFID sensor that could be used to detect moisture in diapers and send an alert to caregivers. “The sensor can be manufactured for less than 2 cents, making it suitable for disposable diapers without adding bulk,” Ricker explains.

MIT researchers have developed a new smart diaper that can send caregivers a message when it detects moisture, reports Caroline Enos for The Boston Globe. “A small moisture sensor in the diaper contains a radio frequency identification tag, which transmits a radio signal to a nearby receiver when the diaper becomes wet,” Enos writes.

Photovoltaic-powered sensors for the “internet of things”