To engineers’ surprise, radiation can slow corrosion of some materials 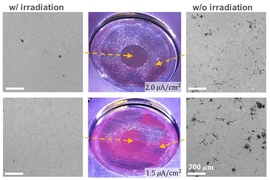 ↓ Download Image
Caption: These optical and scanning electron microscope images show irradiated and unirradiated zones of a nickel-chromium alloy. The left side shows examples of foils with irradiation; instead of degrading the material as it almost always does, the radiation actually makes it stronger by reducing the rate of corrosion.
Credits: Courtesy of the researchers

Caption:
These optical and scanning electron microscope images show irradiated and unirradiated zones of a nickel-chromium alloy. The left side shows examples of foils with irradiation; instead of degrading the material as it almost always does, the radiation actually makes it stronger by reducing the rate of corrosion.
Credits:
Courtesy of the researchers

Radiation nearly always degrades the materials exposed to it, hastening their deterioration and requiring replacement of key components in high-radiation environments such as nuclear reactors. But for certain alloys that could be used in fission or fusion reactors, the opposite turns out to be true: Researchers at MIT and in California have now found that instead of hastening the material’s degradation, radiation actually improves its resistance, potentially doubling the material’s useful lifetime.

The finding could be a boon for some new, cutting-edge reactor designs, including molten-salt-cooled fission reactors, and new fusion reactors such as the ARC design being developed by MIT and Commonwealth Fusion Systems.

The finding, which came as a surprise to nuclear scientists, is reported today in the journal Nature Communications, in a paper by MIT professor of nuclear science and engineering Michael Short, graduate student Weiyue Zhou, and five others at MIT and at the Lawrence Berkeley National Laboratory.

Short says the finding was a bit of serendipity; in fact, the researchers were looking to quantify the opposite effect. Initially they wanted to determine how much radiation would increase the rate of corrosion in certain alloys of nickel and chromium that can be used as cladding for nuclear fuel assemblies.

The experiments were difficult to carry out, because it’s impossible to measure temperatures directly at the interface between the molten salt, used as a coolant, and the metal alloy surface. Thus it was necessary to figure out the conditions indirectly by surrounding the material with a battery of sensors. Right from the start, though, the tests showed signs of the opposite effect — corrosion, the main cause of materials failure in the harsh environment of a reactor vessel, seemed to be reduced rather than accelerated when it was bathed in radiation, in this case a high flux of protons.

“We repeated it dozens of times, with different conditions,” Short says, “and every time we got the same results” showing delayed corrosion.

The kind of reactor environment the team simulated in their experiments involves the use of molten sodium, lithium, and potassium salt as a coolant for both the nuclear fuel rods in a fission reactor and the vacuum vessel surrounding a superhot, swirling plasma in a future fusion reactor. Where the hot molten salt is in contact with the metal, corrosion can take place rapidly, but with these nickel-chromium alloys they found that the corrosion took twice as long to develop when the material was bathed in radiation from a proton accelerator, producing a radiation environment similar to what would be found in the proposed reactors.

Being able to more accurately predict the usable lifetime of critical reactor components could reduce the need for preemptive, early replacement of parts, Short says.

Careful analysis of images of the affected alloy surfaces using transmission electron microscopy, after irradiating the metal in contact with molten salt at 650 degrees Celsius, (a typical operating temperature for salt in such reactors), helped to reveal the mechanism causing the unexpected effect. The radiation tends to create more tiny defects in the structure of the alloy, and these defects allow atoms of the metal to diffuse more easily, flowing in to quickly fill the voids that get created by the corrosive salt. In effect, the radiation damage promotes a sort of self-healing mechanism within the metal.

There had been hints of such an effect a half-century ago, when experiments with an early experimental salt-cooled fission reactor showed lower than expected corrosion in its materials, but the reasons for that had remained a mystery until this new work, Short says. Even after this team’s initial experimental findings, Short says, “it took us a lot longer to make sense of it.”

The discovery could be relevant for a variety of proposed new designs for reactors that could be safer and more efficient than existing designs, Short says. Several designs for salt-cooled fission reactors have been proposed, including one by a team led by Charles Forsberg, a principal research scientist in MIT’s Department of Nuclear Science and Engineering. The findings could also be useful for several proposed designs for new kinds of fusion reactors being actively pursued by startup companies, which hold the potential for providing electricity with no greenhouse gas emissions and far less radioactive waste.

“It’s not particular to any one design,” Short says. “It helps everybody.”

The research team included K. Woller, P. Stahle and G. Q. Zheng at MIT, and Y. Yang and A. M. Minor at Lawrence Berkeley National Laboratory. The work was supported by the Transatomic Power Corporation and the U.S. Department of Energy.