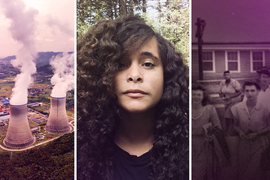 ↓ Download Image
Caption: “I think that the first thing that people should do is realize that when a paper or an analysis says this field suffers from systemic racism, it's not a personal critique. We're talking about systems that have been in place for a long time,” says Katlyn Turner, a research scientist in MIT’s Media Lab.
Credits: Image: Portrait courtesy of Katlyn Turner. Right photo: “Calutron Girls,” 1945, Wikimedia Commons / Ed Westcott, American Museum of Science and Energy. Edited by MIT News.

Caption:
“I think that the first thing that people should do is realize that when a paper or an analysis says this field suffers from systemic racism, it's not a personal critique. We're talking about systems that have been in place for a long time,” says Katlyn Turner, a research scientist in MIT’s Media Lab.
Credits:
Image: Portrait courtesy of Katlyn Turner. Right photo: “Calutron Girls,” 1945, Wikimedia Commons / Ed Westcott, American Museum of Science and Energy. Edited by MIT News.

A group of nuclear scientists recently published a call for anti-racist action in the Bulletin of the Atomic Scientists, urging researchers and their colleagues to confront a long legacy of racial disparities and injustices in the history of the nuclear field, many of which continue today.

Racism and colonialism have influenced which countries and communities shoulder the environmental and health burdens related to the building and testing of nuclear weapons, the authors explain. These forces have also helped determine which countries have enjoyed the economic benefits of nuclear power, and which ones have had a seat at the table for nuclear disarmament talks. And today, people of color continue to face educational and professional barriers in nuclear science as well as other STEM fields.

Katlyn Turner, a research scientist in the MIT Media Lab, is one of the five co-authors, along with MIT alumna Aditi Verma ’12, PhD ’19 and three others. MIT Institute Professor Susan Silbey co-edited the piece. Notably, the five co-authors and two of the three co-editors are women, and a majority of the group are people of color. MIT News talked with Turner about the group’s call for antiracist action and accountability in the nuclear community.

Q: In your piece in the Bulletin you describe a long history of discriminatory practices in the nuclear field, going all the way back to its origins, including in mining and processing, bomb testing, and hazardous nuclear waste. How much of that legacy do you see still affecting the field today?

When we talk about the risk of exposure to nuclear waste, for example, what is usually implicit in policymaking is that we’re not saying whom the risk is for. Is nuclear waste a health risk for someone in Cambridge or Washington, or is it a health risk for an Indigenous American person living in the Southwest? Where are we choosing to site nuclear waste facilities, and who lives near them? Are they people who are empowered by society or are they disenfranchised by society? These decisions generally tend to impact people of color, and they tend to impact people in less-resourced socioeconomic classes. And yet those people are not given a seat at the table, so they can’t even help shape the conversation in most cases.

And then in a lot of institutions now, and academia is one of them, you have a lot of norms around hiring, promoting, and educating that effectively exclude or marginalize women and people of color. We point out in the piece that even compared to STEM more generally — and STEM has this known problem of retaining and promoting women and retaining and promoting minorities — the nuclear field is particularly behind.

Q: What do you see as the most significant “blind spots” or areas of lack of awareness you find in dealing with colleagues in the nuclear field as to the existence of and types of noninclusive practices within their institutions or companies?

A: I think I’d break it down to three levels. The first level is that there’s an unwillingness to look in the mirror at ourselves and at our history — at the true weight of these racist and colonialist norms — both historically and how their impacts are felt now. And what’s hard about that is that most people in 2020, I think, whether they’re on the left or the right of the political spectrum in the United States for example, would not agree with these ideologies that were prevalent in our past. We have people from all backgrounds saying they actively reject racism and discrimination today, which is good. But whether or not you reject racism and discrimination today, where these problems come from is the norms of the past — and the impacts and the vestiges of these norms of the past are felt everywhere. We have to confront that in order to move forward, which is part of what my co-authors and I discuss in this piece.

A second blind spot is related to epistemic racism in the field, which limits who participates in the process of generating and validating knowledge. For example, I remember the first time going to a nuclear policy conference in Washington, one of the premier policy conferences in the world. And I was so struck by how everyone in that room for the most part had a master’s or a PhD, was probably in the upper middle class or on track to be in the upper middle class, and was culturally assimilated at least in that space to Western norms — of dress, speech, and professionalism, for example. How can that be acceptable in a gathering of people discussing nuclear policy, which is an endeavor with truly global ramifications? It shouldn’t be acceptable, and we need to be thinking about how to create epistemic space in nuclear science and policy for the contributions and concerns of more diverse perspectives.

And then in the institutional part of the field, I would say that it suffers from similar issues that STEM or other workplaces suffer from, which is that we still really haven’t figured out how to support people of color and women in institutional spaces. A lot of times we hear institutions saying, oh yeah, we want to recruit more people of color, we care about diversity, we care about equity and inclusion. But then there’s a disconnect between what institutions are saying and what we actually see. For example, if an organization says that they value diversity and equity and inclusion, but every single one of their permanent staff members and permanent decision-making members is a man and is of one particular race, and then they keep making hires and promotions in the same way — do they actually value diversity and equity and inclusion? Or are they just saying they do? There is often a disconnect in institutions between our stated intents, our actions, and their impacts.

Q: What are the most important steps you see that academic departments and companies in the nuclear industry need to take to address these issues of systemic racism?

A: I think that the first thing people should realize is that when a paper or an analysis says a field or an institution suffers from systemic racism, it’s not a personal critique. We’re talking about systems and norms that have been in place for a long time. People need to approach critiques like this with accountability, with honesty and with vulnerability, with the willingness to not be infallible, to admit that maybe this is a problem, mistakes have been made. And then when you have that mindset, you can start to address some of the critiques that we level in this piece. Just because the past was racist and colonialist, it doesn’t mean we are predetermined to be so in the future. Every single one of us faces choices each day to embrace antiracist ideas — those that assert all races are equal — and to create more equitable outcomes.

Considering equitable outcomes within the nuclear community specifically, one example is the salaries, schedules, and other policies at many of the fellowships and other positions that provide entry points into the field make it very difficult to succeed unless you don’t have dependents, or you have a spouse that works and makes three times as much money as you do, or you have a socioeconomic safety net. The authors of this piece, the five of us, speak from experience in that regard. Three of us are women of color. All of us are women. And we’ve gone through some of those fellowships at those institutions. We need to rethink what kinds of jobs we’re giving people as an entryway or a starting point to being in the community. If they even passively exclude those who are less resourced and more disenfranchised, how can we expect those individuals to persist and thrive in these pipelines without making tremendous personal and professional sacrifices, and oftentimes enduring harm for themselves and their families?

As an example, one unique thing to the nuclear field in this regard is that a lot of the organizations like the national labs, where a lot of really high-impact science gets done, are situated in geographic locations that have been historically or are currently unwelcoming to people of color. If you’re a professional of color who wants to work on this high-tech, cutting-edge science and the only places in the world for you to do that are in these locations, you’re basically put in a position of having to choose between your professional or scientific interests versus your safety or your family’s safety and your well-being.

Obviously we’re not going to change where any of the national labs or big institutions are located, but we need to be thinking about how to adopt policies like flexible hours or telecommuting, for example, that could allow employees to work at a place like that but still live in a community that is welcoming to them.

Everyone is uniquely positioned to do something that is anti-racist. We’re not all the dean of a school or a professor who can make changes to their admission structure, to their hiring structure, promotion structures, etc. But we can be any level of worker at an institution and we could, for example, commit to using more inclusive language and taking accountability for unintentional slights that we may have perpetuated against women and minorities. That’s a huge thing that impacts a workplace. Continued top-down and bottom-up approaches are needed in order to create and sustain change, and working in concert I believe we can create more equitable and anti-racist futures. We should all be asking ourselves: What can I do today that is antiracist?

Paper: “A call for antiracist action and accountability in the US nuclear community.”