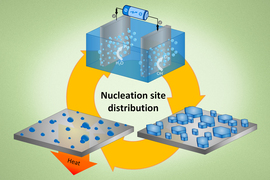 ↓ Download Image
Caption: Many different processes, including boiling, crystallization, and water splitting, are governed by the distribution of nucleation sites that form on surfaces. The new findings apply to all of these and can be used to predict large-scale properties of systems from powerplants to desalination facilities to fabrication plants.
Credits: Courtesy of the researchers 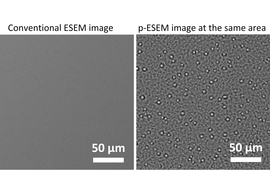 ↓ Download Image
Caption: These two microscope images show the nucleation of water droplets. On the left, imaged by conventional environmental scanning electron microscopy (ESEM) On the right, using the new phase-enhanced (p-ESEM) method, which improved the contrast more than sixfold.
Credits: Courtesy of the researchers

Caption:
Many different processes, including boiling, crystallization, and water splitting, are governed by the distribution of nucleation sites that form on surfaces.
Credits:
Courtesy of the researchers

Caption:
These two microscope images show the nucleation of water droplets. On the left, imaged by conventional environmental scanning electron microscopy (ESEM) On the right, using the new phase-enhanced (p-ESEM) method, which improved the contrast more than sixfold.
Credits:
Courtesy of the researchers

Nucleation is a ubiquitous phenomenon that governs the formation of both droplets and bubbles in systems used for condensation, desalination, water splitting, crystal growth, and many other important industrial processes. Now, for the first time, a new microscopy technique developed at MIT and elsewhere allows the process to be observed directly in detail, which could facilitate the design of improved, more efficient surfaces for a variety of such processes.

The innovation uses conventional scanning electron microscope equipment but adds a new processing technique that can increase the overall sensitivity by as much as tenfold and also improves contrast and resolution. Using this approach, the researchers were able to directly observe the spatial distribution of nucleation sites on a surface and track how that changed over time. The team then used this information to derive a precise mathematical description of the process and the variables controlling it.

The new technique could potentially be applied to a wide variety of research areas. It is described today in the journal Cell Reports Physical Science, in a paper by MIT graduate student Lenan Zhang; visiting research scientist Ryuichi Iwata; professor of mechanical engineering and department head Evelyn Wang; and nine others at MIT, the University of Illinois at Urbana-Champaign, and Shanghai Jiao Tong University.

When droplets condense on a flat surface, such as on the condensers that cycle the steam in electric power plants back into water, each droplet requires an initial nucleation site, from which it builds up. The formation of those nucleation sites is random and unpredictable, so the design of such systems relies on statistical estimates of their distribution. According to the new findings, however, the statistical method that’s been used for these calculations for decades is incorrect, and a different one should be used instead.

The high-resolution images of the nucleation process, along with mathematical models the team developed, make it possible to describe the distribution of nucleation sites in strict quantitative terms. “The reason this is so important,” Wang says, “is because nucleation pretty much happens in everything, in a lot of physical processes, whether it’s natural or in engineered materials and systems. Because of that, I think understanding this more fundamentally is a really powerful opportunity.”

The process they used, called phase-enhanced environmental scanning electron microscopy (p-ESEM), makes it possible to peer through the electronic fog caused by a cloud of electrons scattering from moving gas molecules over the surface being imaged. Conventional ESEM “can image a very wide sample of material, which is very unique compared to a typical electron microscope, but the resolution is poor” because of this electron scattering, which generates random noise, Zhang says.

Taking advantage of the fact that electrons can be described as either particles or waves, the researchers found a way to use the phase of the electron waves, and the delays in that phase generated when the electron strikes something. This phase-delay information is extremely sensitive to the slightest perturbations, down to the nanometer scale, Zhang says, and the technique they developed makes it possible to use these electron-wave phase relationships to reconstruct a more detailed image.

By using this method, he says, “we can get much better enhancement for the imaging contrast, and then we are capable of reconstructing or directly imaging the electrons at a few microns or even a submicron scale. This allows us to see the nucleation process and the distribution of the huge number of nucleation sites.”

The advance enabled the team to study fundamental problems about the nucleation process, such as the difference between the site density and the closest distance between sites. It turns out estimates of that relationship that have been used by engineers for over a half century have been incorrect. They have been based on a relationship called a Poisson distribution, for both the site density and the nearest-neighbor function, when in fact the new work shows that a different relationship, the Rayleigh distribution, more accurately describes the nearest-neighbor relationship.

Zhang explains that this is important, because “nucleation is a very microscopic behavior, but the distribution of nucleation sites on this microscopic scale actually determines the macroscopic behavior of the system.” For example, in condensation and boiling, it determines the heat transfer coefficient, and in boiling even the critical heat flux,” the measure that determines how hot a boiling-water system can get before triggering a catastrophic failure.

The findings also relate to far more than just water condensation. “Our finding about the nucleation site distribution is universal,” Iwata says. “It can be applied to a variety of systems involving a nucleation process, such as water splitting and material growth.” For example, he says, in water splitting systems, which can be used to generate fuel in the form of hydrogen out of electricity from renewable sources. The dynamics of the formation of bubbles in such systems is key to their overall performance, and is determined in large part by the nucleation process.

Iwata adds that “it sounds like water splitting and condensation are very different phenomena, but we found a universal law amongst them. So we are so excited about that.”

Many other phenomena also rely on nucleation, including such processes as the growth of crystalline films, including diamond, across surfaces. Such processes are increasingly important in a wide variety of high-tech applications.

In addition to nucleation, the new p-ESEM technique the team developed can also be used to probe a variety of different physical processes, the researchers say. Zhang says it could be applied also to “electrochemical processes, polymer physics, and biomaterials, because all these kinds of material are widely studied using the conventional ESEM. Yet, by using the p-ESEM, we can definitely get a much better performance due to the intrinsic high sensitivity” of this system.

The p-ESEM system, Zhang says, by improving contrast and sensitivity, can improve the intensity of the signal in relation to background noise by up to 10 times.

Nenad Miljkovic, a professor of mechanical science and engineering at the University of Illinois who was not associated with this work, says, “Nucleation governs a plethora of phenomena such as boiling, condensation, and chemical vapor deposition (as mentioned in the paper) but also a multitude of other phase transitions such as precipitation fouling, corrosion initiation, as well as solidification of ice or phase change materials in energy storage.”

He adds, “Classically, past work has relied on Poisson statistics to obtain an estimate for nearest-neighbor spacing, which can then be used in models to predict heat transfer, growth rates, or reaction dynamics depending on the process at hand. The current work fundamentally alters this classical point of view.”

The research team included Lin Zhao, Shuai Gong, Zhengmao Lu, Yang Zhong, Samuel Cruz, and Kyle Wilke at MIT; Jinlong Zhu, at the University of Illinois at Urbana-Champaign; and Zhenyuan Xu and Ping Cheng at Shanghai Jiao Tong University in China. The work was supported by the Singapore-MIT Alliance for Research and Technology, Toyota Central R&D Labs, and the National Science Foundation of China and National Science and Technology Major Project.