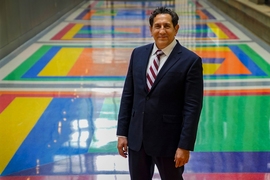 The appointment was announced today in a letter to the community from MIT President L. Rafael Reif.

“As MIT’s chief communications officer, Alfred will advise senior leaders across MIT and shape our overall communications strategy, including media relations, crisis communications, marketing and branding, as well as digital strategy and development. … Our communications team is eager for his arrival, and I know our whole community will benefit from his scope, strategic insight, and personal wisdom,” Reif wrote.

Reporting to Reif as a member of the president’s senior team,  Ironside will oversee the Institute’s Office of Communications, which comprises the MIT News Office, Communications Initiatives, Reference Publications, and CopyTech.

“More than ever before, organizations of every size and scope have an obligation to be open and transparent about what they do and what they stand for, and to engage with diverse audiences in the co-creation of knowledge and impact,” Ironside says. “I’m honored to serve as an advocate and engineer of these efforts at MIT.”

Ironside joins MIT from the Ford Foundation, one of the world’s largest philanthropies. As vice president of global communications, a position he held since 2014, he oversaw the foundation’s executive communications, messaging, strategic partnerships, and public affairs.

During his tenure, which included a role as director of strategic communications from 2006 to 2014, Ironside helped transform the foundation into a visible and influential voice for social justice in the United States. He worked with headquarters teams, global offices, and grantees to develop successful strategies in fields such as immigration, climate change, human rights, and socially responsible technology. He also renewed the foundation’s digital presence, tripling key audiences and growing engagement tenfold.

Prior to joining the Ford Foundation, Ironside served as chief of media relations at the United Nations Children’s Fund (UNICEF). He traveled to more than 40 countries as a UN spokesperson on issues affecting children and women amidst conflict and natural disaster. He also managed a headquarters team and guided 100 country communications officers, coordinating efforts involving multiple UN agencies, nongovernmental organizations, and corporate partners.

Earlier, he spent three years in the U.S. Diplomatic Service as a press officer in East Berlin, where he won commendation for his work during the Berlin Wall crisis, and four years as a spokesperson with the American Red Cross.

For Ironside, leading communications at global organizations has required coordinating and guiding teams across a decentralized structure, which will also be part of his mandate at MIT.

Despite such decentralization, “you have to make music together,” Ironside says. “Listening and trust-building are so important. I look forward to that part of the work.”

Ironside began his career as a news reporter at radio stations in and around Indianapolis and Philadelphia. In the early 1990s he helped launch the first Western advertising agency in Bulgaria and served as its managing director. He was later a member of the editorial team that launched the English edition of Ha’aretz, Israel’s leading newspaper, in conjunction with the International Herald-Tribune.

A native of Philadelphia and an avid cyclist, photographer, and sailor, Ironside holds degrees in political science and journalism from Butler University in Indianapolis, and a master’s in media administration from the Newhouse School and the Graduate School of Business at Syracuse University. He is a member of the Association of Latino Professionals and serves on the board of the Narrative Initiative.

Letter regarding the departure of Vice President for Communications Nate Nickerson