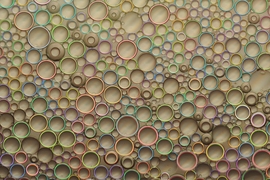 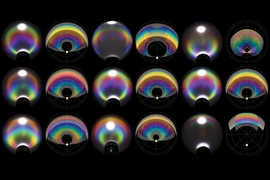 ↓ Download Image
Caption: Seen from above, transparent droplets in a Petri dish, illuminated with white light, appear as varying colors, depending on their size and shape.
Credits: Courtesy of the researchers

Caption:
Seen from above, transparent droplets in a Petri dish, illuminated with white light, appear as varying colors, depending on their size and shape.
Credits:
Courtesy of the researchers

Engineers at MIT and Penn State University have found that under the right conditions, ordinary clear water droplets on a transparent surface can produce brilliant colors, without the addition of inks or dyes.

In a paper published today in Nature, the team reports that a surface covered in a fine mist of transparent droplets and lit with a single lamp should produce a bright color if each tiny droplet is precisely the same size.

This iridescent effect is due to “structural color,” by which an object generates color simply due to the way light interacts with its geometric structure. The effect may explain certain iridescent phenomena, such as the colorful condensation on a plastic dish or inside a water bottle.

The researchers have developed a model that predicts the color a droplet will produce, given specific structural and optical conditions. The model could be used as a design guide to produce, for example, droplet-based litmus tests, or color-changing powders and inks in makeup products.

“Synthetic dyes used in consumer products to create bright colors might not be as healthy as they should be,” says Mathias Kolle, assistant professor of mechanical engineering at MIT. “As some of these dyes are more strongly regulated, companies are asking, can we use structural colors to replace potentially unhealthy dyes? Thanks to the careful observations by Amy Goodling and Lauren Zarzar at Penn State and to Sara’s modeling, which brought this effect and its physical explanation to light, there might be an answer.”

Sara Nagelberg of MIT, along with lead author Goodling, Zarzar, and others from Penn State, are Kolle’s co-authors on the paper. 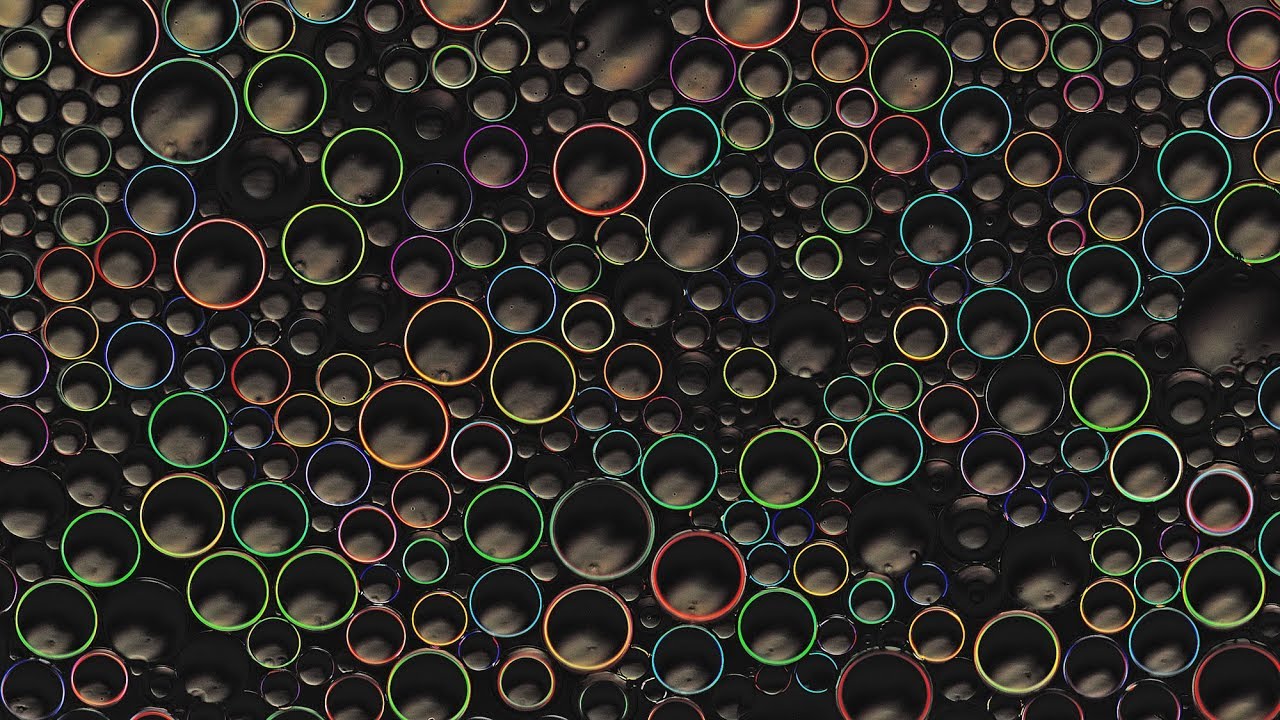 Last year, Zarzar and Goodling were studying transparent droplet emulsions made from a mixture of oils of different density. They were observing the droplets’ interactions in a clear Petri dish, when they noticed the drops appeared surprisingly blue. They took a photo and sent it off to Kolle with a question: Why is there color here?

Initially, Kolle thought the color might be due to the effect that causes rainbows, in which sunlight is redirected by rain drops and individual colors are separated into different directions. In physics, Mie scattering theory is used to describe the way spheres such as raindrops scatter a plane of electromagnetic waves, such as incoming sunlight. But the droplets that Zarzar and Goodling observed were not spheres, but rather, hemispheres or domes on a flat surface.

“Initially we followed this rainbow-causing effect,” says Nagelberg, who headed up the modeling effort to try to explain the effect. “But it turned out to be something quite different.”

She noted that the team’s hemispherical droplets broke symmetry, meaning they were not perfect spheres — a seemingly obvious fact but nevertheless an important one, as it meant that light should behave differently in hemispheres versus spheres. Specifically, the concave surface of a hemisphere allows an optical effect that is not possible in perfect spheres: total internal reflection, or TIR.

Total internal reflection is a phenomenon in which light strikes an interface between a high refractive index medium (water, for instance) to a lower refractive index medium (such as air) at a high angle such that 100 percent of that light is reflected. This is the effect that allows optical fibers to carry light for kilometers with low loss. When light enters a single droplet, it is reflected by TIR along its concave interface.

In fact, once light makes its way into a droplet, Nagelberg found that it can take different paths, bouncing two, three, or more times before exiting at another angle. The way light rays add up as they exit determines whether a droplet will produce color or not.

For example, two rays of white light, containing all visible wavelengths of light, entering at the same angle and exiting at the same angle, could take entirely different paths within a droplet. If one ray bounces three times, it has a longer path than a ray that bounces twice, so that it lags behind slightly before exiting the droplet. If this phase lag results in the two rays’ waves being in phase (meaning the waves’ troughs and crests are aligned), the color corresponding to that wavelength will be visible. This interference effect, which ultimately produces color in otherwise clear droplets, is much stronger in small rather than large droplets.

“When there is interference, it’s like kids making waves in a pool,” Kolle says. “If they do whatever they want, there’s no constructive adding up of effort, and just a lot of mess in the pool, or random wave patterns. But if they all push and pull together, you get a big wave. It’s the same here: If you get waves in phase coming out, you get more intensity of color.”

A carpet of color

The color that droplets produce also depends on structural conditions, such as the size and curvature of the droplets, along with the droplet’s refractive indices.

Nagelberg incorporated all these parameters into a mathematical model to predict the colors that droplets would produce under certain structural and optical conditions. Zarzar and Goodling then tested the model’s predictions against actual droplets they produced in the lab.

First, the team optimized their initial experiment, creating droplet emulsions, the sizes of which they could precisely control using a microfluidic device. They produced, as Kolle describes, a “carpet” of droplets of the exact same size, in a clear Petri dish, which they illuminated with a single, fixed white light. They then recorded the droplets with a camera that circled around the dish, and observed that the droplets exhibited brilliant colors that shifted as the camera circled around. This  demonstrated how the angle at which light is seen to enter the droplet affects the droplet’s color.

The team also produced droplets of various sizes on a single film and observed that from a single viewing direction, the color would shift redder as the droplet size increased, and then would loop back to blue and cycle through again. This makes sense according to the model, as larger droplets would give light more room to bounce, creating longer paths and larger phase lags.

To demonstrate the importance of curvature in a droplet’s color, the team produced water condensation on a transparent film that was treated with a hydrophobic (water-repelling) solution, with the droplets forming the shape of an elephant. The hydrophobic parts created more concave droplets, whereas the rest of the film created shallower droplets. Light could more easily bounce around in the concave droplets, compared to the shallow droplets. The result was a very colorful elephant pattern against a black background.

In addition to liquid droplets, the researchers 3-D-printed tiny, solid caps and domes from various transparent, polymer-based materials, and observed a similar colorful effect in these solid particles, that could be predicted by the team’s model.

Kolle expects that the model may be used to design droplets and particles for an array of color-changing applications.

“There’s a complex parameter space you can play with,” Kolle says. “You can tailor a droplet’s size, morphology, and observation conditions to create the color you want.”

This research was supported, in part, by the National Science Foundation and the U. S. Army Research Office through the Institute for Soldier Nanotechnologies at MIT.

Financial Times reporter Clive Cookson writes that researchers from MIT and Penn State have developed a technique to make clear droplets produce iridescent colors. Cookson explains that the phenomenon is a previously unknown example of ‘structural color,’ produced not by pigments but the internal reflections of light within the tiny droplets.”

A mollusk of a different stripe