Kirk Kolenbrander to leave MIT after 29 years of service 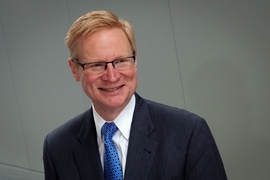 Vice President Kirk Kolenbrander will leave MIT in March to become an executive vice president at Southern New Hampshire University, the nation’s largest private nonprofit university and a leader in online education. In this new role, Kolenbrander will lead the development of SNHU’s College of Engineering, Technology and Aeronautics.

Trained as a chemist, Kolenbrander has been at MIT since 1990, first as a faculty member in the Department of Materials Science and Engineering and then in a variety of administrative roles. His last day at the Institute will be March 2.

President L. Rafael Reif shared the news today in an email to MIT faculty and staff.

“Kirk has the rare distinction of having closely served three MIT presidents,” Reif wrote. “From 2001 to 2004, he was special assistant to Chuck Vest. From 2004 to 2006, he served as senior advisor to Susan Hockfield, and then, from 2006 to 2011, as her Vice President and Secretary of the Corporation. And since I began as president in 2012, Kirk has continued as a superb member of MIT’s leadership team, the calm voice we all count on for his personal wisdom, deep institutional knowledge and unerring moral compass.”

Reif noted that Kolenbrander has made “an indelible difference in the history of MIT” by managing the searches that elevated the Institute’s last two presidents, as well as two successive chairs of the MIT Corporation: Dana Mead PhD ’67 and John Reed ’61, SM ’65.

“Kirk Kolenbrander is the epitome of an MIT citizen,” says President Emerita Susan Hockfield. “Having held a number of different roles at the Institute, he was the ideal person to staff the 2004 Presidential Search Committee. When the Committee first approached me, he provided a warm welcome and an intelligent introduction to the Institute. And then, when the outcome of the search became clear, he took up the assignment as my primary guide through the transition, with the responsibility of introducing me to the people and resources that would build my understanding of the Institute’s past, present, and possible future. Kirk’s constant patience, insight, and good humor served the Institute and me exceedingly well throughout my years as president.”

Reflecting on his decades at the Institute, Kolenbrander says, “In so many ways, I grew up at MIT. I have become who I am through countless relationships with MIT’s amazing students, faculty, postdocs, staff, alumni, and trustees. It has been my tremendous honor to serve this community in its enduring and inspiring work.”

Kolenbrander, who holds a PhD in physical chemistry from the University of Illinois at Urbana-Champaign, joined MIT in 1990 as an assistant professor of electronic materials, becoming an associate professor in 1995. As a faculty member, he won the MIT Baker Award for Faculty Excellence in Undergraduate Teaching and the MIT Smith Award for Outstanding Faculty Contributions to Student Life, each of which is awarded annually to one member of the MIT faculty.

In 1995, Kolenbrander led the creation of MIT LeaderShape, an intensive leadership curriculum he has taught during Independent Activities Period for nearly 25 years, providing more than 1,000 MIT students with a formative experience in community-centered problem solving.

“MIT has been fortunate to claim the loyalty of Kirk Kolenbrander for several decades of extraordinary change,” says Susan Silbey, chair of the MIT faculty. “He brings a depth of institutional knowledge and wisdom, which we will not enjoy again for a long, long time. His passion for education and the well-being of students, as well as the Institute, is unmatched. We are poorer without him.”

Kolenbrander moved to the Office of the Chancellor in 1998, serving as an associate dean from 1998 to 2000, as interim dean for student life in 2000, and as a special assistant to then-Chancellor Lawrence Bacow from 2000 to 2001.

In recent years, Kolenbrander was instrumental in forging a new partnership between the Institute and the MIT Alumni Association. He has also led efforts to introduce changes intended to enhance diversity and inclusion at MIT, including improvements related to orientation for incoming students, mental health services, implicit bias training, financial aid, and student surveys and data collection.

“These are tumultuous times on college campuses across the nation, specifically in the areas of climate, culture, diversity, equity, and inclusion,” says DiOnetta Jones Crayton, associate dean in the Office of the Vice Chancellor and director of the Office of Minority Education, who has worked closely with Kolenbrander on these issues. “What was uniquely different about MIT’s approach is that we took the time to listen, and then we partnered with students to address their concerns. Kirk stepped in to lead this charge at a critical time, and he did what any good leader should do — he sought out thought partners and collaborators to gain a deeper understanding and appreciation of our students’ needs and concerns. Then, he worked with those same campus partners and with senior administration to address those concerns. For that, I think we can all say, ‘thank you.’”

From vision to action