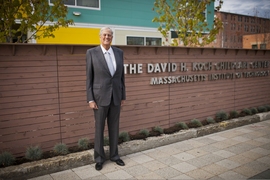 Caption:
David Koch during a visit to MIT on Oct. 4 2013 to dedicate the Koch Childcare Center on Vassar Street
Credits:
Photo: Dominick Reuter

Koch’s willingness to back significant initiatives at the Institute was exemplified by his foundational gift establishing the David H. Koch Institute for Integrative Cancer Research, a pioneering facility that brings research scientists and engineers together to advance the frontiers of cancer medicine. The Koch Institute has become a centerpiece of MIT’s pursuit of biomedical innovation and the useful application of knowledge to global health.

Koch had wide-ranging interests concerning the life of the Institute, however, and in addition to cancer research, he supported many other causes and activities at MIT, including chemical engineering, childcare for employees, and athletics. At any given moment around MIT, beneficiaries of Koch’s gifts included faculty with endowed professorships, students with fellowships he supported — and toddlers in the childcare center he helped found.

“David Koch had a brilliant instinct for opportunities where the lever of his philanthropy could make a transformative difference,” says MIT President L. Rafael Reif. “As one example, his gift to launch the Koch Institute dramatically advanced a new strategy in which engineers and scientists push the frontiers of cancer research by working side by side. At the same time, he saw that the David H. Koch Childcare Center could play an indispensable role in helping young faculty, staff, postdocs, and graduate students manage the balance of family and career. We are grateful for his longstanding devotion to the Institute. Very few graduates have left such a broad and indelible mark on the life of MIT.”

The Koch Institute, dedicated in 2011, was backed by a $100 million gift Koch made to MIT in October 2007, allowing for a new state-of-the-art facility at MIT and an innovative, interdisciplinary approach to the fight against cancer. The Koch Institute houses a wide array of world-leading scientists: Five current and former faculty have been awarded the Nobel Prize, and nine current and former faculty have been awarded the National Medals of Science or Technology and Innovation. All told, Koch has given MIT $134 million to support cancer research and facilities.

“From my very first days as MIT’s president, David Koch became a friend, collaborator, supporter, and enthusiast,” says President Emerita Susan Hockfield, who led MIT from 2004 to 2012. “He already had a long history of generosity to MIT, but his commitment to accelerating progress against cancer gave particular force to MIT’s efforts to reimagine our own cancer research. David was one of this nation’s most generous donors to cancer research, and his engagement with many of the leading cancer research centers gave him an amazingly sophisticated understanding of the frontier of cancer biology and therapy.”

The Koch Institute emphasizes five main areas of research: the development of nanotechnology-based cancer treatments; new devices for cancer detection and monitoring; research about the molecular and cellular processes of metastasis; the advancement of personalized medicine, by studying cancer pathways and resistance to drugs; and research about how the immune system can fight cancer.

“This is a new approach to cancer research with the potential to uncover breakthroughs in therapies and diagnostics,” Koch said in 2007. “Conquering cancer will require multidisciplined initiatives and MIT is positioned to enable that collaboration. As a cancer survivor, I feel especially fortunate to be able to help advance this effort.”

President Emerita Hockfield, whose tenure included the period when David H. Koch made his initial gift funding the Koch Institute, as well as its opening, lauded Koch’s visionary support of the project.

“David provided resources, of course, but also wisdom and strategy to keep the project on time and on budget,” Hockfield says. “He took personal interest in the people and projects at what became the David H. Koch Institute for Integrative Cancer Research.”

Koch’s embrace of an interdisciplinary center for fighting cancer advanced and enhanced MIT’s capabilities in this arena, notes Tyler Jacks, the David H. Koch Professor of Biology at MIT, and director of the David H. Koch Institute for Integrative Cancer Research.

“As an MIT-trained engineer, David immediately saw the value in bringing together the great strengths in engineering on our campus with our cancer science efforts in order to solve the most challenging problems in cancer,” Jacks says. “As a cancer survivor, he has been deeply committed to supporting innovative approaches to improve outcomes for patients. David chose to invest in MIT because he believed that we were uniquely positioned to change the course of cancer, and his generosity has enabled us to do that.”

Jacks added that MIT benefitted from Koch’s high level of interest in the the research projects he backed.

“From the earliest days of planning the Koch Institute, David dug into the details,” Jacks says. “He was always inquisitive and really enjoyed asking probing questions, whether about the HVAC system in the building or the intricacies of nanotechnology-based cancer therapy. David was a huge supporter of what we do and rightly proud of what we have created in the Koch Institute. And we are extremely grateful for his support.”

In addition to the named chair Jacks holds, Koch endowed other professorships that bear his name, held by MIT faculty in the fields of biology, biological engineering, chemical engineering, and materials science and engineering.

David H. Koch was born in Wichita, Kansas, on May 3, 1940. He graduated from Deerfield Academy, a prep school in Massachusetts, and received his bachelor’s degree and master’s degree from MIT in chemical engineering, the Institute’s Course 10. He joined Koch Industries, the firm founded by his father, in 1970, and became president of a division of the company, Koch Engineering, in 1979. He served as executive vice president of Koch Industries until publicly announcing his retirement, due to his health, in June 2018.

Beyond cancer research, Koch was also a significant supporter of MIT’s programs in chemical engineering. In the 1980s, Koch made a significant gift to sustain the School of Chemical Engineering Practice at MIT, whose roots go back to 1916. Now known as the David H. Koch School of Chemical Engineering Practice, this is a unique program for graduate students combining coursework with internships, to enhance both academic and professional development.

“David Koch was a model philanthropist who funded initiatives across a swath of cultural, scientific, and medical institutions,” says Robert Millard, chair of the MIT Corporation. “His generosity has benefited humanity broadly — from the arts to cancer research to science. MIT is deeply thankful for his many contributions to our community.”

In a different vein, Koch served as lead donor for the David H. Koch Childcare Center at MIT, which opened in 2013 and almost doubled the childcare capacity on campus. Situated on Vassar Street on the west side of the MIT campus, the center provides high-quality support for MIT faculty, postdocs, graduate students, and staff who are raising young families, often while pursuing intensive research careers.

Koch decided to give $20 million for the facility after serving on the Biology Visiting Committee at MIT — one of many such groups that advise the Institute — and recognizing the need for more extensive childcare facilities in order to help attract and retain talented personnel on campus. Along with Koch, Charles W. Johnson ’55 and Jennifer C. Johnson also helped fund the facility.

A less well-known but vital aspect of Koch’s relationship with MIT was his enduring support for the Institute’s basketball team. Koch was a standout basketball player as an undergraduate, and captained the MIT team during the 1961-62 season, his senior year; he played alongside his brother Bill on MIT’s varsity team. David Koch’s attachment to the program continued throughout his life.

Indeed, Koch not only followed the team, and attended team banquets, but endowed the position of coach for the men’s basketball team, a role that has been filled since the 1995-96 season by Larry Anderson. During that time, MIT has had a superb run of success, which includes making the NCAA Division III Final Four in 2012.

“My heart goes out the entire Koch family," says Anderson. “I know that David had lots of love and interests – we were lucky enough that MIT Basketball was one of them. He was proud to wear the MIT Cardinal red and silver gray as captain of the team. He was the record-holder for 47 years for the most points scored in a single game with 41, and his support meant so much to the MIT Basketball family.”

“David’s generous philanthropy allowed us to do many impossible things at MIT, but I have valued equally his curiosity, interest, engagement, and enthusiasm,” Hockfield says. “Coming from an MIT family, David Koch was truly a son of MIT who made the Institute a better place, for its students and faculty, and for the lives they change through their work.”

David Koch, an MIT alumnus known for his philanthropic work, has died at age 79, reports Andrew Edgecliffe-Johnson and Lindsay Fortado for the Financial Times. Koch, who was a basketball star at MIT, “donated or pledged more than $1.3bn in total to causes including cancer research, hospitals and education."

MIT alumnus and philanthropist David Koch has died, reports Steve Peoples and Jennifer Peltz for the Associated Press. Koch was an ardent supporter of cancer research and “donated $100 million in 2007 to create a cancer research institute at the Massachusetts Institute of Technology.”