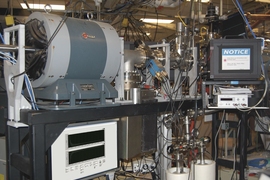 ↓ Download Image
Caption: The ion beamline at Sandia National Labs where the new radiation damage measurement system has been installed and tested. The radiation damage process is observed in a target chamber located behind the black-box laser enclosure on the right of the image.
Credits: Image: Cody Dennett

Caption:
The ion beamline at Sandia National Labs where the new radiation damage measurement system has been installed and tested. The radiation damage process is observed in a target chamber located behind the black-box laser enclosure on the right of the image.
Credits:
Image: Cody Dennett

In order to evaluate a material’s ability to withstand the high-radiation environment inside a nuclear reactor, researchers have traditionally used a method known as “cook and look,” meaning the material is exposed to high radiation and then removed for a physical examination. But that process is so slow it inhibits the development of new materials for future reactors.

Now, researchers at MIT and Sandia National Laboratories have developed, tested, and made available a new system that can monitor radiation-induced changes continuously, providing more useful data much faster than traditional methods.

With many nuclear plants nearing the end of their operational lifetimes under current regulations, knowing the condition of materials inside them can be critical to understanding whether their operation can be safely extended, and if so by how much.

The new laser-based system can be used to observe changes to the physical properties of the materials, such as their elasticity and thermal diffusivity, without destroying or altering them, the researchers say. The findings are described in the journal Nuclear Instruments and Methods in Physics Research Section B in a paper by MIT doctoral student Cody A. Dennett, professor of nuclear science and engineering Michael P. Short, and technologist Daniel L. Buller and scientist Khalid Hattar from Sandia.

The new system, based on a technology called transient grating spectroscopy, uses laser beams to probe minute changes at a material’s surface that can reveal details about changes in the structure of the material’s interior. Two years ago, Dennett and Short adapted the approach to monitor radiation effects. Now, after extensive testing, the system is ready for use by researchers exploring the development of new materials for next-generation reactors, or those looking to extend the lives of existing reactors through a better understanding how materials degrade over time under the harsh radiation environment inside reactor vessels.

The old way of testing materials for their response to radiation was to expose the material for some amount of time, then take it out and “bash it to pieces to see what happened,” Dennett explains. Instead, “we wanted to see if you could detect what’s happening to the material during the process, and infer how the microstructure is changing.”

The transient grating spectroscopy method had already been developed by others, but it had not been used to look for the effects of radiation damage, such as changes in the material’s ability to conduct heat and respond to stresses without cracking. Adapting the technique to the unique and harsh environments of radiation required years of development.

To simulate the effects of neutron bombardment — the type of radiation that causes most of the material degradation in a reactor environment — researchers commonly use ion beams, which produce a similar kind of damage but are much easier to control and safer to work with. The team used a 6-megavolt ion accelerator facility at Sandia as the basis for the new system. These types of facilities accelerate testing because they can simulate years of operational neutron exposure in just a few hours.

By using the real-time monitoring ability of this system, Dennett says, it’s possible to pinpoint the time when the physical changes to the material start to accelerate, which tends to happen fairly suddenly and progress rapidly. By stopping the experiment just at that point, it’s then possible to study in detail what happens at this critical moment. “This allows us to target what the mechanistic reasons behind these structural changes are,” he says.

Short says the system could perform detailed studies of the performance of a given material in a matter of hours, whereas it might otherwise take months just to get through the first iteration of finding the point when degradation sets in. For a complete characterization, conventional methods “might be taking half a year, versus a day” using the new system, he says.

In their tests of the system, the team used two pure metals — nickel and tungsten — but the facility can be used to test all sorts of alloys as well as pure metals, and could also test many other kinds of materials, the researchers say. “One of the reasons we’re so excited here,” Dennett says, is that when they have described this method at scientific conferences, “everybody we’ve talked to says ‘can you try it on my material?’ Everybody has an idea of what will happen if they can test their own thing, and then they can move much faster in their research.”

The actual measurements made by the system, which stimulates vibrations in the material using a laser beam and then uses a second laser to observe those vibrations at the surface, directly probe the elastic stiffness and thermal properties of the material, Dennett explains. But that measurement can then be used to extrapolate other related characteristics, including defect and damage accumulation, he says. “It’s what they tell you about the underlying mechanisms” that’s most significant.

The unique facility, now in operation at Sandia, is also the subject of ongoing work by the team to further improve it capabilities, Dennett says. “It’s very improvable,” he says, adding that they hope to add more different diagnostic tools to probe more properties of materials during irradiation.

The work is “a clever engineering approach that will allow researchers to characterize the response of a variety of materials to irradiation damage,” says Laurence J. Jacobs,

professor and associate dean for academic affairs at the Georgia Tech, who was not involved in the study. He says it is “an outstanding piece of research on a noncontact, nondestructive evaluation technique that enables the real-time, in situ monitoring  of the mechanical properties of a material subjected to ion beam irradiation.”

The research was supported by the U.S. Department of Energy, the MIT-SUTD International Design Center, the U.S. Nuclear Regulatory Commission, and the Center for Integrated Nanotechnologies at Sandia National Laboratories.