Caption:
Drop Day: After months of planning and safety checks, a donated, irreparable piano is prepared for dropping off of the Baker House roof.
Credits:
Photo: Stephanie Tran/DSL Communications

MIT students are known for asking big questions that forever change the world. Other times, the question they ask is: “Why don’t we drop a piano off the roof?”

The Baker House Piano Drop is one of MIT’s longest-running rituals, and this year — 46 years after the initial drop — it’s still going strong. 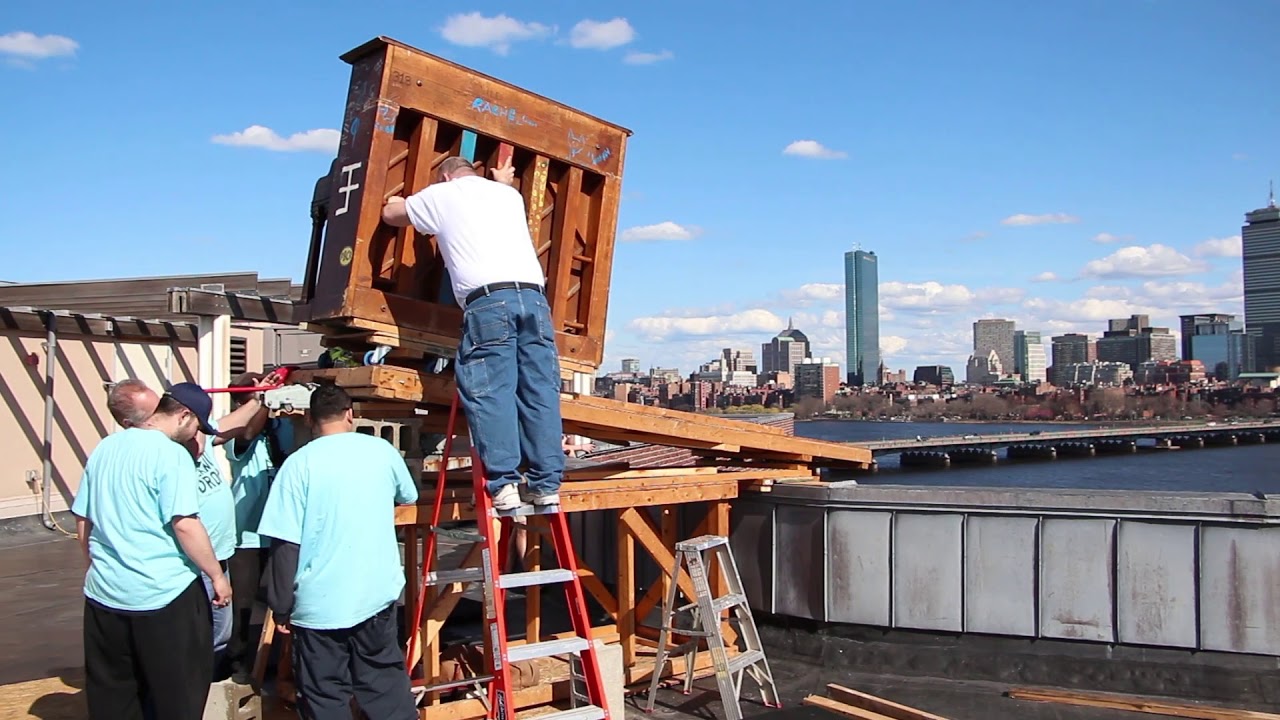 The first piano drop took place in 1972 and was masterminded by Charlie Bruno ’74. According to a post made to Baker House - The Historical Collection by Mark Fischler ’74, a participant in the maiden piano drop, the idea was born from a house meeting debate over what to do with a broken piano that had been sitting around Baker House. Someone suggested they push it out of a window, but this idea was shot down: Student handbook guidelines prohibited throwing objects out of dorm windows. But Bruno found that the handbook said nothing about throwing things off of dorm roofs. Handbooks were consulted, and the students discovered that Bruno was right. A motion was passed, and after some planning and prep work, the piano was dropped.

Nearly half a century later, Bruno’s legacy lives on, not only in the tradition he started, but in a new unit of measurement. A “Bruno” measures the volume of the dent left after a piano is dropped six stories. Fischler claims that after the drop, the Baker Hall snack bar offered a special on 1.0 Bruno milkshakes (about a liter).

The Baker House Piano Drop has since been moved to appropriately coincide with Drop Day, the last day to drop classes for the spring semester. In the months leading up to the event, student organizers work together on a safety plan with guidance from the Baker House manager, the Division of Student Life’s environment, health and safety manager, and representatives from MIT Facilities and MIT Grounds.

On Drop Day, Baker House residents whose dorm rooms overlook the drop are informed to keep all windows and blinds shut, and a perimeter is set-up for spectators. That afternoon as drop time nears, students, MIT Police, Cambridge Police, and other community members gather around a grassy clearing by Memorial Drive to watch as the piano falls. The piano is decorated by the Baker House residents and is often filled with candy or confetti, to add to the celebratory nature of the drop. Once it hits the ground, students rush in from the sidelines to grab a few coveted pieces of the demolished instrument.

While pianos are certainly harmed in the making of this event, all dropped pianos are nonworking, completely beyond repair, and donated to the residence hall instead of being sent to a junkyard.

Piano Drop organizers also made T-shirts, cleverly parodying the Nike slogan “Just Do It” with “Just Drop It.” In recent years, these shirts have been sold for a good cause, and this year was no different: All proceeds from the T-shirt sales were donated to a charity selected by Baker House residents.