Implantable islet cells come with their own oxygen supply 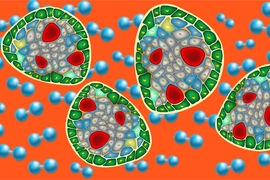 Since the 1960s, researchers have been interested in the possibility of treating type 1 diabetes by transplanting islet cells — the pancreatic cells that are responsible for producing insulin when blood glucose concentration increases.

Implementing this approach has proven challenging, however. One obstacle is that once the islets are transplanted, they will die if they don’t receive an adequate supply of oxygen. Now, researchers at MIT, working with a company called Beta-O2 Technologies, have developed and tested an implantable device that furnishes islet cells with their own supply of oxygen, via a chamber that can be replenished every 24 hours.

“Getting oxygen to these cells is a difficult problem,” says Clark Colton, an MIT professor of chemical engineering and the senior author of the study. “The benefits of this approach are: you keep the islets alive to perform their function, you don’t need as much tissue, and you reduce the ability of the implants to provoke an immune response.”

Tests of these implants in rats showed that nearly 90 percent of the islets remained viable for several months, and most of the rats maintained normal blood glucose levels throughout that time.

Yoav Evron of Beta-O2 Technologies is the lead author of the study, which appears in the April 25 issue of Scientific Reports.

Type 1 diabetes occurs when a patient’s own immune system destroys pancreas’ islet cells, so the patient can no longer produce insulin, which is necessary for the body to absorb sugar from the bloodstream. Early attempts to treat patients by transplanting islets from cadavers were unsuccessful because the islets didn’t survive after transplantation.

One of the reasons the transplanted islets failed is that they were attacked by the patients’ immune systems. To protect the transplanted cells, researchers have begun developing implants in which the islets are encapsulated in a material such as a polymer. However, a remaining challenge is making sure that the islets receive enough oxygen, Colton says.

In a healthy pancreas, all islet cells come into contact with capillaries, allowing them to receive oxygen-rich blood, at an oxygen partial pressure of about 100 millimeters of mercury (mm Hg). (Partial pressure is a measure of the concentration of an individual gas within a mixture of gases). When doctors first tried to transplant islets into diabetic patients, many of the cells did not have any direct contact with capillaries, so their oxygen supply was too low.

Previous research in Colton’s laboratory discovered that the outer surface of islets needs to be exposed to at least 50 mm Hg of oxygen to remain viable and produce insulin normally. Through a series of experiments, the MIT team, working with researchers at Beta-O2 Technologies, determined the operating conditions of the device needed for islets to stay alive and function for long periods of time while assembled in a compact form small enough to be implanted in human patients.

In the device tested in the Scientific Reports paper, islets are encapsulated in a slab of alginate, a polysaccharide produced by algae, about 600 microns thick. A membrane on one side of slab keeps out immune cells and large proteins but allows insulin, nutrients, and oxygen  through. Below the slab is the gas chamber, about 5 millimeters thick, which carries atmospheric gases such as nitrogen and carbon dioxide in addition to oxygen. Oxygen flows from the chamber, across the semipermeable membrane, and into the islets embedded in the alginate slab.

In tests in diabetic mice without immunosuppression, the researchers showed that nearly 90 percent of the islets survived the entire transplant period, which ranged from 11 weeks to eight months. They also found that most of these animals’ blood sugar levels remained normal while the devices were implanted, then rebounded to diabetic levels after they were removed.

Another benefit of this approach is that, because most of the islet cells remain alive, they are less likely to provoke an immune response. When cells die, they break down, and the resulting fragments of protein and DNA are more likely to attract the attention of the immune system.

“By keeping the cells alive, you minimize the immune response,” Colton says.

James Shapiro, a professor of surgery, medicine, and surgical oncology at the University of Alberta, who has been running an islet transplantation program there for the past 20 years, says he believes this approach holds great promise and could help to eliminate the need to give islet transplantation patients drugs to suppress their immune system.

“This kind of device can protect the cells from immune attack and deliver oxygen in a way that allows more cells to survive,” says Shapiro, who was not involved in the study. “This would allow islet cells to be transplanted in patients without antirejection drugs, which would dramatically improve the safety of what we’re doing today with islet cell transplantation.”

Researchers at Beta-O2 Technologies are now working on new versions of the device in which an oxygen storage chamber is implanted below the skin, separate from the islets. This version would only need to be replenished once a week, which could be more appealing for patients.

The research was funded, in part, by the Israeli Ministry of Sciences.