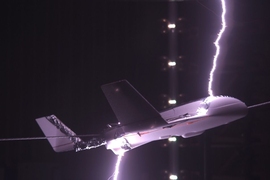 Aviation experts estimate that every commercial airplane in the world is struck by lightning at least once per year. Around 90 percent of these strikes are likely triggered by the aircraft itself: In thunderstorm environments, a plane’s electrically conductive exterior can act as a lightning rod, sparking a strike that could potentially damage the plane’s outer structures and compromise its onboard electronics.

To avoid lightning strikes, flights are typically rerouted around stormy regions of the sky. Now, MIT engineers are proposing a new way to reduce a plane’s lightning risk, with an onboard system that would protect a plane by electrically charging it. The proposal may seem counterintuitive, but the team found that if a plane were charged to just the right level, its likelihood of being struck by lighting would be significantly reduced.

The idea stems from the fact that, when a plane flies through an ambient electric field, its external electrical state, normally in balance, shifts. As an external electric field polarizes the aircraft, one end of the plane becomes more positively charged, while the other end swings towards a more negative charge. As the plane becomes increasingly polarized, it can set off a highly conductive flow of plasma, called a positive leader — the preceding stage to a lightning strike.

In such a precarious scenario, the researchers propose temporarily charging a plane to a negative level to dampen the more highly charged positive end, thus preventing that end from reaching a critical level and initiating a lightning strike.

The researchers have shown through modeling that such a method would work, at least conceptually. They report their results in the American Institute of Aeronautics and Astronautics Journal.

The team, which includes Emeritus Professor Manuel Martinez-Sanchez and Assistant Professor Carmen Guerra-Garcia, envisions outfitting a plane with an automated control system consisting of sensors and actuators fitted with small power supplies. The sensors would monitor the surrounding electric field for signs of possible leader formation, in response to which the actuators would emit a current to charge the aircraft in the appropriate direction. The researchers say such charging would require power levels lower than that for a standard lightbulb.

“We’re trying to make the aircraft as invisible to lightning as possible,” says co-author Jaime Peraire, head of MIT’s Department of Aeronautics and Astronautics and the H.N. Slater Professor of Aeronautics and Astronautics. “Aside from this technological solution, we are working on modeling the physics behind the process. This is a field where there was little understanding, and this is really an attempt at creating some understanding of aircraft-triggered lightning strikes, from the ground up.”

The paper’s other co-author is Ngoc Cuong Nguyen, a research scientist in the aeronautics and astronautics department.

To be clear, lightning itself poses very little danger to passengers inside an aircraft, as a plane’s cabin is well-insulated against any external electrical activity. In most cases, passengers may only see a bright flash or hear a loud bang. Nevertheless, an aircraft that has been hit by lightning often requires follow-up inspections and safety checks that may delay its next flight. If there is physical damage to the plane, it may be taken out of service — something the airlines would rather avoid.

What’s more, newer aircraft made partly from nonmetallic composite structures such as carbon fiber may be more vulnerable to lightning-related damage, compared with their older, all-metal counterparts. That’s because charge may accumulate on poorly conducting panels and create potential diffences from panel to panel, which may cause certain regions of a panel to spark. A standard protective measure is to cover the outside of the aircraft with a light metallic mesh.

“Modern aircraft are about 50 percent composites, which changes the picture very significantly,” Guerra-Garcia says. “Lightning-related damage is very different, and repairs are much more costly for composite versus metallic aircraft. This is why research on lightning strikes is flourishing now.”

Guerra-Garcia and her colleagues looked at whether electrically charging an airplane would bring down its risk of lightning strikes — an idea that was initially suggested to them by collaborators at Boeing, the research sponsor.

“They are very eager to reduce the incidence of these things, partly because there are large cost expenses related to lightning protection,” Martinez-Sanchez says.

To see whether the charging idea held up, the MIT team first developed a simple model of an aircraft-triggered lightning strike. As a plane flies through a thunderstorm or other electrically charged environment, the outside of the plane begins to be polarized, forming “leaders,” or channels of highly conductive plasma, flowing from opposite ends of the plane and eventually out toward oppositely charged regions of the atmosphere.

“Imagine two channels of plasma propagating very quickly, and when they reach the cloud and the ground, they form a circuit, and current flows through,” Guerra-Garcia says.

“These leaders carry current, but not very much,” Martinez-Sanchez adds. “But in the worst cases, once they establish a circuit, you can get 100,000 amps, and that is when damage happens.”

The researchers developed a mathematical model to describe the electric field conditions under which leaders would develop, and how they would evolve to trigger a lightning strike. They applied this model to a representative aircraft geometry and looked to see whether changing the aircraft’s potential (charging it negatively) would prevent the leaders from forming and triggering a lightning strike.

Their results show that, averaging over field directions and intensities, the charged scenario required a 50 percent higher ambient electric field to initiate a leader, compared with an uncharged scenario. In other words, by charging a plane to an optimal level, its risk of being struck by lightning would be significantly reduced.

“Numerically, one can see that if you could implement this charge strategy, you would have a significant reduction in the incidents of lightning strikes,” Martinez-Sanchez says. “There’s a big if: Can you implement it? And that’s where we’re working now.”

Graduate student Theodore Mouratidis is performing preliminary experiments in MIT’s Wright Brothers Wind Tunnel, testing the feasibility of charging on a simple, metallic sphere. The researchers also hope to carry out experiments in more realistic environments, for instance by flying drones through a thunderstorm.

To make the charging system practical, Martinez-Sanchez says researchers will have to work to speed up its response time. Based on their modeling, he and his colleagues have found that such a system could charge and protect a plane within fractions of a second, but this will not be enough to protect against some forms of triggered lightning.

“The scenario we can take care of is flying into an area where there are storm clouds, and the storm clouds produce an intensification of the electric field in the atmosphere,” Martinez-Sanchez says. “That can be sensed and measured on board, and we can claim that for such relatively slow-developing events, you can charge a plane and adapt in real time. That is quite feasible.”

This research was sponsored by the Boeing Company.