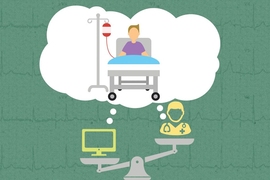 Caption:
A new study from MIT computer scientists suggests that human doctors provide a dimension that, as yet, artificial intelligence does not.
Credits:
Image: Chelsea Turner, MIT

Many technology companies are working on artificial intelligence systems that can analyze medical data to help diagnose or treat health problems. Such systems raise the question of whether this kind of technology can perform as well as a human doctor.

A new study from MIT computer scientists suggests that human doctors provide a dimension that, as yet, artificial intelligence does not. By analyzing doctors’ written notes on intensive-care-unit patients, the researchers found that the doctors’ “gut feelings” about a particular patient’s condition played a significant role in determining how many tests they ordered for the patient.

“There’s something about a doctor’s experience, and their years of training and practice, that allows them to know in a more comprehensive sense, beyond just the list of symptoms, whether you’re doing well or you’re not,” says Mohammad Ghassemi, a research affiliate at MIT’s Institute for Medical Engineering and Science (IMES). “They’re tapping into something that the machine may not be seeing.”

This intuition plays an even stronger role during the first day or two of a patient’s hospital stay, when the amount of data doctors have on patients is less than on subsequent days.

How to measure feelings

Doctors consider a huge number of factors — including symptoms, severity of illness, family history, and lifestyle habits — when deciding what kinds of exams to order for their patients. In addition to those factors, Ghassemi, Alhanai, and their colleagues wondered whether a doctor’s “gut feelings” about a patient also plays a role in their decision-making.

To try to reveal whether this kind of intuition plays a role in doctors’ decisions, the researchers performed sentiment analysis of doctors’ written notes. Sentiment analysis, which is often used for gauging consumer attitudes, is based on computer algorithms that examine written language and tally positive or negative sentiments associated with  words used in the text.

The researchers performed their analysis on the MIMIC database, a collection of medical records from 60,000 ICU patients admitted to Beth Israel Deaconess Medical Center in Boston over a 10-year period. This database includes doctors’ notes on the patients as well as severity of illness, diagnostic imaging exams, and several other factors.

The researchers wanted to determine what, if anything, the doctors’ notes added on top of the information available in the medical records. They computed sentiment scores from the notes to see if there was any correlation with how many diagnostic imaging tests the doctors ordered for patients.

If medical data alone was driving doctors’ decisions, then sentiment would not have any correlation with the number of tests ordered. However, the researchers found that when they accounted for all other factors, the doctors’ sentiments did indeed help predict how many tests they would order. This effect was strongest at the beginning of a patient’s hospital stay, when doctors had less medical information to go on, and then declined as time went by.

“Clearly the physicians are using something that is not in the data to drive part of their decision making,” Alhanai says. “What’s important is that some of those unseen effects are reflected by their sentiment.”

Next, the researchers hope to learn more about just what factors contribute to doctors’ gut feelings. That could potentially lead to the development of artificial intelligence systems that could learn to incorporate the same information that doctors are using to evaluate patients.

“The question is, can you get the machine to do something like that? It would be very interesting to teach the machine to approximate what the doctor encodes in their sentiment by using data not currently captured by electronic health systems, such as their speech,” Alhanai says.