Daniel Hastings named head of Department of Aeronautics and Astronautics

A member of the MIT faculty since 1985, Hastings will succeed Jaime Peraire as AeroAstro department head.
School of Engineering
Publication Date:
Press Inquiries 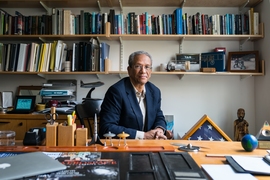 Daniel E. Hastings, the Cecil and Ida Green Education Professor at MIT, has been named head of the Department of Aeronautics and Astronautics, effective Jan. 1, 2019.

“Dan has a remarkable depth of knowledge about MIT, and has served the Institute in a wide range of capacities,” says Anantha Chandrakasan, dean of the School of Engineering. “He has been a staunch advocate for students, for research, and for MIT’s international activities. We are fortunate to have him join the School of Engineering’s leadership team, and I look forward to working with him.”

Hastings, whose contributions to spacecraft and space system-environment interactions, space system architecture, and leadership in aerospace research and education earned him election to the National Academy of Engineering in 2017, has held a range of roles involving research, education, and administration at MIT.

Hastings has taught courses in space environment interactions, rocket propulsion, advanced space power and propulsion systems, space policy and space systems engineering since he first joined the faculty in 1985. He became director of the MIT Technology and Policy Program in 2000 and was named director of the Engineering Systems Division in 2004. He served as dean for undergraduate education from 2006 to 2013, and from 2014 to 2018 he has been director of the Singapore-MIT Alliance for Research and Technology (SMART).

Hastings has also had an active career of service outside MIT. His many external appointments include serving as chief scientist from 1997 to 1999 for the U.S. Air Force, where he led influential studies of Air Force investments in space and of preparations for a 21st-century science and technology workforce. He was also the chair of the Air Force Scientific Advisory Board from 2002 to 2005; from 2002 to 2008, he was a member of the National Science Board.

A fellow of the American Institute of Aeronautics and Astronautics (AIAA), Hastings was also awarded the Losey Atmospheric Sciences Award from the AIAA in 2002. He is a fellow (academician) of the International Astronautical Federation and the International Council in System Engineering. The U.S Air Force granted him its Exceptional Service Award in 2008, and in both 1997 and 1999 gave him the Air Force Distinguished Civilian Award. He received the National Reconnaissance Office Distinguished Civilian Award in 2003. He was also the recipient of MIT’s Gordon Billard Award for “special service of outstanding merit performed for the Institute” in 2013.

Hastings received his bachelor’s degree from Oxford University in 1976, and MS and PhD degrees in aeronautics and astronautics from MIT in 1978 and 1980, respectively.

Edward M. Greitzer, the H.N. Slater Professor of Aeronautics and Astronautics, will serve as interim department head from July 1 to Dec. 31, 2018.

Hastings will replace Jaime Peraire, the H. N. Slater Professor in Aeronautics and Astronautics, who has been department head since July 1, 2011. “I am grateful to Jaime for his excellent work over the last seven years,” Chandrakasan noted. “During his tenure as department head, he led the creation of a new strategic plan and made significant steps in its implementation. He addressed the department's facilities challenges, strengthened student capstone- and research-project experience, and led the 2014 AeroAstro centennial celebrations, which highlighted the tremendous contributions MIT has made to aerospace and national service.”

Eight MIT faculty elected to the National Academy of Engineering