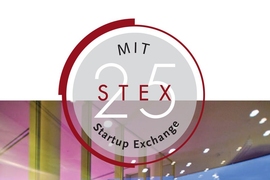 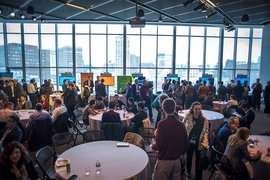 Caption:
STEX25 is a competitive accelerator launched last year by the MIT Startup Exchange, which prioritizes connecting industry partners with fast-growing MIT startups to accelerate innovation. Throughout the year, STEX25 startups participate in various events on MIT’s campus and across the globe, attended by startup founders and corporate representatives, such as networking seminars, various workshops, pitch presentations, startup showcases, and startup-industry meet-and-greet sessions between startup founders and corporate executives.

“Fostering corporate partnerships is our mandate,” says Trond Undheim, program director of STEX25. “We believe such partnerships are key to enhancing a fast-growing startup’s validation and value, and startups are highly effective vehicles for testing the commercial viability of products.”

So far, the accelerator’s 25 startups, which are developing cutting-edge technologies, have seen major benefits, including new customers, promising partnerships, pilot projects, and even pivots to new and more profitable sectors.

Admission is highly selective. Twenty-five startups, from the more than 1,500 in the Startup Exchange database, are nominated by MIT administrators across the Institute, based on rigorous criteria that include potential for rapid growth, broad industry appeal, and strong technological roots.

“Once we connect them [with industry partners], they can get on the ground running and start improving an existing industry process or contribute to entirely new business lines in large companies,” Undheim adds.

Startups span diverse technologies — in part to exemplify the wide range of MIT innovation — including 3-D printing, synthetic biology, autonomous vehicles, artificial intelligence, aerospace, robotics, energy, and data analytics. Startups remain in the accelerator for six months to a year, and STEX25 takes no equity in the startups, which many accelerators do in exchange for space.

“We really try to be a neutral arbiter,” Undheim says. “We are the startup’s advocates, but we are also the industry advocates, and we try to identify the best opportunities for partnerships.”

Throughout the year, STEX25 startups participate in various events on MIT’s campus and across the globe, attended by startup founders and corporate representatives. Events include networking seminars, various workshops and forums, pitch presentations, startup showcases, the ILP’s “Technology and the Corporation Conferences,” and startup-industry meet-and-greet sessions between startup founders and corporate executives.

Only a month after joining STEX25, Desktop Metal has found a potential corporate customer through one of the meet-and-greet sessions in June, where founders and company representatives briefly meet at one station to discuss collaborations, before moving on to another station.

Desktop Metal is developing a small, inexpensive 3-D metal printer. It combines metal powder with a binding material to create a polymer that is fed into the printer, heated, and reconstructed into a metal part. Today’s 3-D metal printers are massive, expensive machines that shoot lasers into a bed of powdered metal, solidifying the material into solid metal. Desktop Metal’s additive printer fits on a desk and costs about one-tenth as much.

Co-founded in 2015 by four MIT professors, Desktop Metal is well-funded and working with such strategic partners as Lowe’s, Caterpillar, and BMW. Even so, the STEX25 event introduced the startup to a major automotive company that knew little of the technology and is now looking to collaborate. “We are constantly identifying new customers who don’t know a lot about additive 3-D metal printing,” co-founder and Chief Technology Officer Jonah Myerberg says. “We want to educate these companies on what we’re doing and see if we make an engagement. If not, it seeds additive manufacturing in their mind for the future.”

Startup C2Sense, founded in early 2014 and a member of The Engine, saw similar outcomes. The startup is developing a chemiresistor sensor, based on MIT research, that can detect gases. When gases encounter the chemiresistor, the electrical resistance changes. An algorithm translates this change to identify a specific gas concentration. Users can leverage this data to track the ripeness of fruit, rotten meat, or, say, ammonia produced by waste in chicken farms.

The startup recently launched its first product with a fruit-storage company AgroFresh. At the SENSE.nano symposium held in May, MIT Startup Exchange hosted a demonstration station, where C2Sense showcased its technology and made many new industry contacts. “We came away with a much wider audience,” says co-founder and CEO Jan Schnorr PhD ’12, who is also a former MIT postdoc.

Affectiva, co-founded in 2009 by former MIT postdoc Rana el Kaliouby, develops “Emotion AI” — emotion recognition or emotion detection — technologies. Its software is being used by more than 1,400 brands and about a third of global Fortune 100 companies for ad testing. The software is also integrated in games, health care, and education apps. The company found STEX25 helpful for its next major push: bringing its technology to autonomous vehicles.

Next-generation autonomous vehicles will be equipped with in-cabin cameras to monitor drivers. Using those cameras to track driver emotions — noting if they’re drowsy, distracted, and frustrated — can improve road safety, especially for semiautomated vehicles, which toggle between full autonomy and human control. “When the car hands control to a human driver, that can only be done safely if it knows the human driver is paying attention, if they’re awake, alert, and engaged,” el Kaliouby says.

Networking seminars and informal presentations hosted by the accelerator have helped facilitate several meetings between Affectiva and promising automotive companies. “We are aggressively going after new markets and, by being part of STEX25, we get introductions to players in those markets,” el Kaliouby says.

For Relativity6, STEX25 led to an entirely new industry of focus. The startup crunches internal data from a company and external data to find a pool of lapsed customers — such as those who have dropped a service — and determine which ones have the highest likelihood of returning. It also offers product suggestions to entice customers back.

Spinning out of MIT last year, the startup joined STEX25 in January with a focus on retail, but it soon shifted its attention to insurance providers. For insurance companies, the startup can analyze data and find that a certain lapsed customer, say, had a child and may want life insurance. The provider can then reach out to the customer offering services.

“STEX25 gave us an introduction to so many industries, we got a feel for what we were the best fit for,” co-founder Alan Ringvald MBA ’16 says. “That’s how [our focus on] insurance came about.”

The startup also secured pilots with companies in other sectors, including aerospace and retail. “The hardest step after building a product is speaking to decision makers, but STEX25 helps facilitate that process,” Ringvald says.

Getting a leg up

STEX25 startups have an advantage because they are nominated by MIT administrators and heavily vetted, says Greg Falco, an MIT PhD student and co-founder and CEO of Neuromesh, a startup launched in December 2016 that secures internet of things (IoT) devices by leveraging the bitcoin blockchain — a growing ledger of bitcoin transactions linked and secured using cryptography.

“It’s not a group of students that cobbled together something in class and now they’re looking to sell it,” says Falco, who was named to the 2018 Forbes 30 Under 30 list for enterprise technology. “You get past a lot of the stigmas associated with early-stage startups by being part of STEX25.”

Many IoT devices are built on open-source operating systems, which are vulnerable to hacker attacks. Neuromesh “locks down” an IoT device by ensuring that it can only perform its originally intended functions, and sends security updates to the device via the bitcoin blockchain, which is, so far, unhackable. A good example is a smart meter designed to track kilowatt hours of electricity used in a house or building. A hacker could recruit the device to become part of a botnet that sends spam to other systems. Neuromesh’s software would send a command to stop the botnet operation over the blockchain, blocking out all malicious processes.

The technology is fairly novel and difficult to market due to the various industry sensitivities around IoT technologies. But after just a few months in the accelerator, Neuromesh has several big corporations interested, Falco says. “You can’t ask for anything more than that when it comes to sales,” he says.

Moving forward, Undheim says, STEX25 organizers are refining the programming and building a community of industry executives that will be closely collaborating with future cohorts. “We’re still evolving to make it truly outstanding, make it world-class, and building a lasting alumni network so the founders can keep benefiting from the cohort before them,” he says.