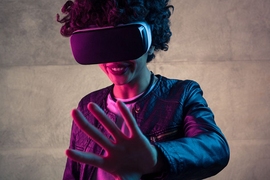 Caption:
Tuesday night, at the inaugural Play Labs demo event, 13 startups presented products they’ve developed in the accelerator. Afterward, the crowd was treated to live demonstrations of the technologies.

As “playful” technologies such as virtual reality (VR) and augmented reality (AR) become increasingly prevalent in the gaming world — and the real world — MIT continues to find ways to support innovation and entrepreneurship in those areas.

In January, the MIT Game Lab, along with Bayview Labs and the Seraph Group, announced the launch of Play Labs, a new summer accelerator specifically for playful technologies. The first cohort of 13 startups was selected in June.

Tuesday night, at the inaugural Play Labs demo event, those startups presented to the public the products they’ve developed in the accelerator. Afterward, the crowd was treated to live demonstrations of the technologies.

In his opening remarks, video game entrepreneur Rizwan Virk ’92, executive director and co-founder of Play Labs and Bayview, discussed the inspiration for and importance of launching an accelerator focused entirely on playful technologies.

Video games have been critical to the advancement of computer science, he said. Artificial intelligence traces its roots to computers designed to play chess, chat bots have origins in text adventure games, and virtual reality was inspired by first-person shooters. “Most technologies we use have some root in games,” he said to the crowd gathered in Room 10-250.

But Play Labs was also inspired, in part, by personal experience. Struggling to fund his first startup, Brainstorm, Virk had to buy computers to test his software and return them within 30 days for a full refund. “We wanted to give this new generation of startups a way to jump across these problems,” he said.

Each startup that entered Play Labs in June received an initial investment of $20,000, “so they didn’t have to buy and return their own computers,” Virk joked. The startups also received weekly mentorship from experienced playful tech entrepreneurs from MIT and elsewhere. Now that they’ve graduated, the startups are eligible for $80,000 in additional funding from the accelerator and its partners.

During the demo event, each startup delivered a brief presentation of their technology to a crowd of investors, MIT community members, and the general public. An online stream also aired on the West Coast and in China, two major areas for investment. Startups were seeking seed capital of a few hundred thousand to about a million dollars.

But the real fun started after the pitches, when the large crowd tested out the prototypes outside the lecture hall, in the lobby under the MIT dome, and outside of Building 10.

Surrounded by eager testers was RidgeLine Labs, creator of RoVR, a VR dog simulator that lets users care for a virtual canine in an ever-expanding virtual world. During the pitches, co-founder Henry Zhou, a Tufts University student, presented a video of the simulation, where the user found a cute, friendly pup in a box in a park, then went through various scenarios of feeding, bathing, walking, training, and playing with the dog. In the lobby, excited attendees donned the VR headset and handsets to scoop up the dog and pet it in their arms.

The idea was conceived after Zhou noticed the abundance of pet videos posted on social media — and “because my mom never let me have a dog growing up,” Zhou told MIT News. RoVR can be used by people who may not have access to real pets, he said.

Before entering Play Labs, RidgeLine’s virtual dog was “a lot uglier,” Zhou said. Among other things, the accelerator provided much-needed capital to hire employees to refine the animation.

Now, the simulation is on Kickstarter, has a much larger network of investors and industry experts, and is ready to launch. “The marketing, the fundraising, the pitching skills that we gained from Play Labs were huge. Now I feel truly prepared to take the product from prototype to release,” Zhou said.

Another MIT spinout invented a VR game that incorporated a solution to a major VR issue: nausea. VRemedy Labs is developing an intensity “dial,” based on MIT research, that mitigates queasiness caused by VR games. Features such as light, movement, speed, and acceleration contribute to nausea. Games generally offer only either a comfort setting, with features minimized, or an exciting setting, with features at full intensity. The startup’s dial, however, lets players choose between 100 different, slightly modified levels of intensity.

“When you turn the dial up, features change accordingly to what feels most comfortable,” co-founder Eric LaCava, a senior in electrical engineering and computer science told MIT News. “Someone playing at 55 is playing a very similar game to someone playing at 100, but the attacks on their body are lessened.”

At the event, the startup demonstrated its first superhero game, I Hate Heroes, which it’s been developing for only a month and a half. LaCava said Play Labs provided the first-time entrepreneurs, among other things, valuable mentorship in launching their startup. “We needed the guidance a lot more than we needed the money,” LaCava said. “They really walked us through what it’s like to do this for the first time … and how to get into this market without falling prey to some of the things startups usually do.” The startup is now in talks with Sony and other companies as potential partners.

The AR-based startups updated two very popular types of hobbies: escape rooms, where players are locked in a room and must solve puzzles to exit, and action sports, such as paintball and airsoft. Escape Labs is developing holographic content — such as portals, creatures, and interactive puzzles — that players can interact with in physical escape rooms. A growing industry, there are now 1,900 escape room locations in the United States alone.

Total Respawn, which had a long line at its booth outside Building 10, creates real-life AR first-person shooter games for action sports arenas. In his pitch, co-founder Mark Belmarsh showed a video of the startup’s first game, where a player uses a real paintball or airsoft gun to shoot zombies. The technology allows for video game graphics in physical arenas, tracking hits digitally, and sharing content online, much like an eSport. The startup has two locations signed on for this fall.

“Anything capable of happening in a video game is capable of recreating in augmented reality [for the arena], so helicopters flying around, explosions, you name it,” Belmarsh said. Moreover, this will “transform traditional action sports today from niche hobbies with cult following into a competitive sport with mass market appeal.”

Of course, it wasn’t all games. Some startups developed their technologies for reasons other than gaming. Coresights, for instance, combines virtual and augmented reality technologies with biometric wearables to improve corporate and wellness training. Similarly, Minda Labs developed a VR application for diversity training in simulated scenarios to build empathy and communication skills. And Datavized creates unique VR 3-D visualizations of data that aim to thoroughly immerse people in information to improve decision making.

Hidden Switch: an MIT Media Lab spinout developing a feature that lets eSports community members connect with some of the biggest eSports stars.

Team Future: created Black Hat Cooperative, an award-winning stealth game that pits a player and an ally against robot agents trying to remove players from the game.