Caption:
At the 2017 ATHack-a-thon, Team Alex created a wheelchair attachment and web interface that allows Alex to control a video camera with his feet.
Credits:
Photo: Jaya Narain

More than 1 billion people globally need one or more assistive devices, such as prosthetics and communication devices, to address problems resulting from their disabilities. However, currently 90 percent of people in need are without access to those products, according to the World Health Organization. Compounding this accessibility issue is a massive shortage in the assistive technology workforce.

To promote innovation and long-term interest in working in the field of assistive technologies, the Assistive Technologies Hackathon (ATHack), now in its fourth year, is held at Beaver Works in Cambridge, Massachusetts. During the event this spring, MIT students develop technological solutions to problems faced by Greater Boston-area clients with disabilities. Students have one day to create prototype assistive devices to suit client needs.

Two weeks prior to this year's event, 70 students and 17 clients met at an ATHack-sponsored dinner. Clients described their disabilities and what they'd like to achieve with an assistive device. "ATHack presents students with a wide scope of projects. In some cases, building the technology itself is simple. The real challenge lies in understanding what the user needs and designing a technology that suits those needs," says MIT graduate student Jaya Narain, who co-directed the event with fellow students Ishwarya Ananthabhotla and Tally Portnoi. The ATHack coordinators grouped into teams those students with similar skillsets, academic backgrounds, and interests. 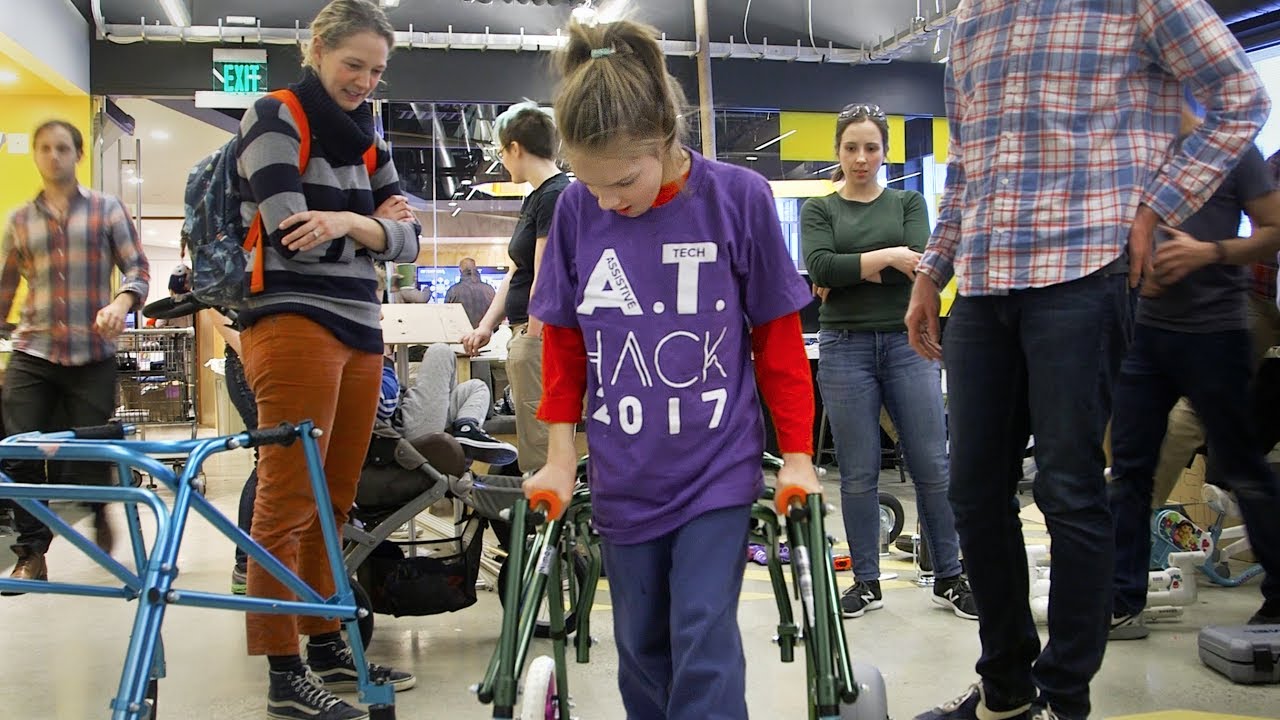 Play video
MIT students gain new perspective on how their assistive technology designs can improve the lives of others while building a new walker for 9-year-old Lilly during the annual ATHack-a-thon.

On the day of the hack, each team created a functioning prototype for their client. Students had access to a wide range of resources, including working space, machinery, and building materials, within Beaver Works and technical assistance from several mentors: John Vivilecchia, Kurt Krueger, and Richard Landry of MIT Lincoln Laboratory; Don Fredette of The Boston Home; Michael Buchman of the MIT Department of Mechanical Engineering; and Mary Ziegler of the MIT Office of Digital Learning. Clients were also present during the build to give feedback on the functionality of the devices.

"The technologies that the students created were very useful to the ATHack clients," says Vivilecchia. "At the end of the hack, the piles of shavings around the machine tools, the remnants of laser cutter material, and the stacks of 3-D-printed parts scattered throughout Beaver Works were a testament to the hard work and skill of the participants. This was one of the best ATHacks in which I have had the pleasure of participating."

Team Alex built a camera system for their client, an award-winning film director. Alex's cerebral palsy makes controlling his body difficult, with his best control over his knees and feet. The team invented a camera mount that attached to the outer-left frame and armrest of his wheelchair. The mount included a dock for a camera and a small motor. Alex controlled the camera — including changing its height, tilting it 60 degrees up and down, and panning 300 degrees — via four buttons located on the foot rests of the wheelchair. Two buttons tilted the camera up and down, while the other two buttons connect to a display on a phone or tablet mounted to Alex's wheelchair within eyesight. Each tap of the button enabled Alex to scroll through and select several camera settings, including manual focus, aperture size, and shutter speed.

"This experience was amazing because we were able to make our client, Alex, extremely happy. We managed to finish a prototype, and Alex was able to shoot his own movie. He captured footage of our team working on his wheelchair," says Florian Hillen. "It was a gratifying moment for Alex and our team."

Team Dan built a universal remote control for a client who can move only his head. Dan already had a laptop that tracks where his head moves and allows him to "point and click" items displayed on the laptop screen. The team decided to hack a universal remote that communicates via Wi-Fi with a web interface from which Dan could control television power, volume, and channels. The remote was connected to an Internet router so that it had its own IP address and could send and receive messages over the Wi-Fi connection. Dan used his existing "point and click" interface to make selections on his new web interface. When he made a selection, a signal from the laptop to the remote sent a signal to the television.

When the team saw the success of the television remote, they decided to expand the remote's capabilities. They created a mechanical light switch that can be mounted to any switch in Dan's home. The mechanism surrounds a light switch and moves up and down to turn a light on and off. The team added an option to Dan's web interface so that he can control lights. A messaging option added to the interface includes a list of his caretakers, their contact numbers, and six prerecorded messages, such as "I'm in pain" and "I'm hungry." Dan clicks on a person, a message, and the send button, triggering the computer to send the text message to the selected recipient.

"When our team first met Dan, we were shocked to find that he did not have the technology to turn his lights on and off. This problem, and others, is fairly easy to solve, so we became passionate about solving multiple problems to make Dan's life better," says Ishaan Grover. "It was a gratifying experience to talk to Dan, figure out what he needed, and actually deliver solutions."

Once the build time was over, several judges, including the ATHack organizers, David Crandelle and David Binder of the Spaulding Rehabilitation Network; John Vivilecchia; Don Fredette; and Mary Ziegler evaluated each team's device. The judges based their decisions on working prototypes, technical usability, and successful student-client communication and translated client needs into a working product. Team Alex earned first place, and Team Dan won second place in the competition.

According to Narain, because of the space limitations of the current Beaver Works facility, AT Hack organizers turned away more than 100 students who were interested in participating. With a new Beaver Works space scheduled to open within the next year, Narain hopes to use both the current and new spaces to accommodate student demand and help a growing number of needy clients.

"As students, we have the skills to make a difference. If 24 hours of your life can significantly make someone else's life better, then everyone should do it," said Grover. "Once you see the reaction from someone that you've helped, you'll understand the value of this program and this career option."

A measurable improvement in STEM access for the blind

Empowerment through mobile technology and co-design