Caption:
“The best part of being on the show has definitely been the great outpouring of support the MIT community has given me,” says senior Lilly Chin, the newly crowned “Jeopardy!” College Champion, seen here with host Alex Trebek.
Credits:
Photo: Jeopardy Productions, Inc.

Caption:
Lilly Chin hosted a watch party at MIT for the airing of the final round of the 2017 "Jeopardy!" College Championships on Feb. 24.
Credits:
Photo: Maia Weinstock/MIT

Caption:
Lilly Chin watches her performance in the "Jeopardy!" College Championship finals, which were taped in January. She kept the outcome (mostly) a secret until the Feb. 24 airing.
Credits:
Photo: Maia Weinstock/MIT

Caption:
After her victory, Lilly Chin explains that she'll now play in one of the "Jeopardy!" Tournaments of Champions.
Credits:
Photo: Maia Weinstock/MIT

Let’s be honest: Even the most disciplined college students don’t pay attention all the time during their classes. The temptations of a hushed conversation with a classmate, a daydream, or any number of digital distractions can be hard to resist.

But one could argue that senior Lilly Chin had an excellent excuse for tuning out during one of her comparative media studies classes last October: She was taking a 10-minute online test to qualify for the popular TV quiz show “Jeopardy!” It was only offered on one specific date, at one specific time — which happened to be during class — so she had little choice. “I was trying not to get caught by the teacher while I was answering the questions,” she later confided to a “Jeopardy!” film crew, barely suppressing a giggle.

In the end, it was worth the risk. Chin went on to become a contestant on the show, made it to the finals, and walked away with the college championship title and the tidy sum of $100,000. Sworn to secrecy since the show’s January taping, Chin was able to savor the victory tonight at a final episode screening held in Room 4-237, where she was cheered on by dozens of friends and other fans from the MIT community. 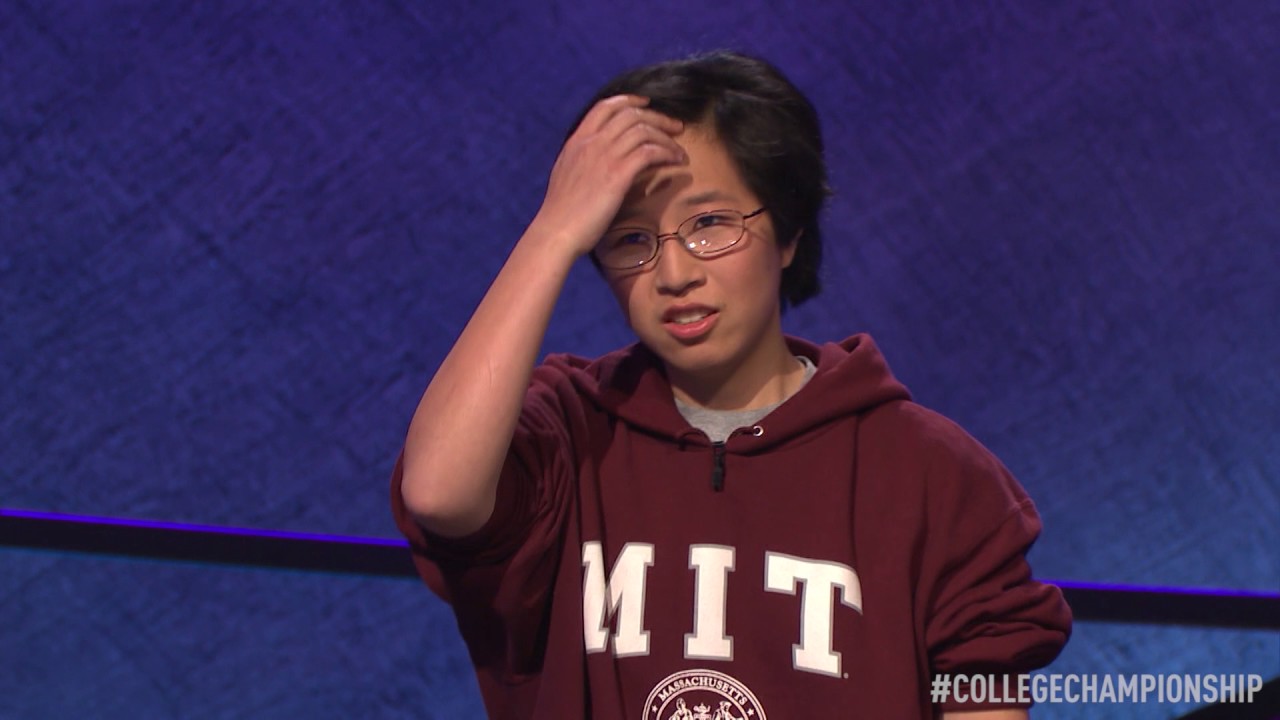 Play video
MIT senior Lilly Chin recalls her experience on the road to the "Jeopardy!" College Championship. For her final response, Chin gave a "spicy" shoutout to her friends in place of a real question: She'd earned enough cash at the end of Double Jeopardy! to guarantee her championship title.

The making of a “Jeopardy!” champion

Chin was one of thousands of students from schools around the U.S. who applied in October to be contestants on the show. Of those, 250 were invited to in-person auditions in New York City in November, which consisted of a written test, gameplay, and an interview. She learned she’d made the cut — a total of 15 students and one alternate — in December, and the show was taped Jan. 10-11 in Los Angeles.

Chin, an electrical engineering and computer science major with a minor in mechanical engineering, credits part of her success to her curiosity about media, which led her to also minor in comparative media studies. She loves “investigating different forms of media, whether it’s film, video games, or children’s literature — [it’s] the same curiosity which leads me to seek out factoids about these media, and which tend to get asked about more on ‘Jeopardy!’”

A native of Decatur, Georgia, Chin is no stranger to trivia competitions; she participated in quiz bowls from 5th grade through high school. She prepared for “Jeopardy!” in a myriad of ways, like reviewing her old trivia books, reading web comics, listening to Top 40 music, and generally spending lots of time “goofing off on the internet.” She found creative ways to bolster her knowledge of subjects she didn’t know well; to address a weakness in history, she crammed The Cartoon History of the Modern World.

Chin enlisted the help of MIT friends to study and practice her gameplay, including playing Protobowl, a real-time, multi-player quiz bowl application created by her classmate, senior Kevin Kwok. She also sought advice from two MIT connections who had “Jeopardy!” experience: her former graduate resident tutor, Philip Arevalo (who motivated her to apply for the show), and Pranjal Vachaspati ’14.

Preparation aside, Chin also had a few tricks up her sleeve. One of them was buzzer strategy. “I think the game is actually more about buzzer strategy than trivia,” she says. Timing is everything: buzz too soon, before the show’s host Alex Trebek finishes reading the clue, and your buzzer will get locked out for a fraction of a second — enough time for an opponent to buzz in. The key is to time it precisely when Trebek is done speaking.

Her board strategy paid off, too. In the more conventional approach, contestants work their way through one category, moving from lower-value clues at the top of the board to higher-value clues at the bottom. Others, like Chin, prefer to jump between categories and choose clues further down the board. “It’s a bit of a controversial strategy,” she says. But the advantage is that skipping around the board can throw off your opponents and increase your odds of finding the clue with the Daily Double. “The Daily Doubles aren’t evenly distributed,” Chin explains. “People have run stats and found they tend to be in the fourth row or so.”

Being on the show was “surreal,” Chin recalls, smiling broadly. “There was a moment when all the contestants realized that this was actually happening. After the game, everyone’s hands were shaking.” To combat her own nerves, she channeled her experience on the trap shooting team (part of the MIT Sporting Clays Association), in which players shoot moving clay targets with a shotgun. “The coach is always like, ‘Don’t keep track of the score, just take it one shot at a time,’’ she says, “because especially for shooting, any sport, you need to be calm. As soon as you start thinking, ‘Oh no, what ifs’, then your game gets off and you miss everything. So I think that really helped.”

Throughout the course of the two-week tournament, as word spread about her progress, Chin developed quite a following on the MIT campus. “The best part of being on the show has definitely been the great outpouring of support the MIT community has given me,” she says.  “At first, I was a bit embarrassed about being on national television and tried to keep the whole thing under wraps. But soon, I found that the more people that I told, the more I found that people were eager to help and support me.”

President L. Rafael Reif, Chancellor Cynthia Barnhart, and Vice President and Dean for Student Life Suzy Nelson were among those rooting for her. “If the clue is ‘Nerd Pride,’ the answer must be, ‘What was our overwhelming reaction when we learned that Lilly Chin just won College Jeopardy?’” Reif wrote in an email to Chin. “Even better, for this longtime professor: You’re not just MIT, you're EECS! Lilly, I hope you have a moment to savor this terrific achievement.”

“[Provost] Marty Schmidt and I have decided you are the Tom Brady of ‘Jeopardy’ — great job!” Barnhart said in an email to Chin, following Chin’s second-to-last appearance on the show. Nelson wrote Chin after her strong showing in the first week: “I’m so proud of your Jeopardy performance…Plus, love your strategy of finding those Daily Doubles — bold and fearless.”

Chin developed quite a fan base among MIT students, who found creative ways to show their support, throwing screening parties and sharing their favorite moments on social media. One friend, Shi-Ke Xue ’16, created a series of gifs of Chin on the show and shared them on Reddit.

Looking back, and ahead

In retrospect, Chin admits she feels a bit bad about taking the “Jeopardy!” online test during class in October, adding, “That is one of my favorite classes.” Luckily, her professor, T.L. Taylor, who also followed her progress on “Jeopardy!” (and is now privy to Chin’s secret about the test), loves the anecdote. “How very apropos,” she says, “considering it was a class on games and culture!”

Chin, who plans to begin a PhD program in robotics after graduation, says she’ll use the prize money to pay off college loan debt and to travel to a few research conferences around the world on video game studies — a media that continues to pique her boundless curiosity.

Graduate student Lilly Chin, winner of the 2017 Jeopardy! College Championship, reminisces with Tiziana Dearing of Radio Boston about "Jeopardy!" game show host Alex Trebek. “Alex really enjoyed being on the job, but also enjoyed sort of being an uncle to the contestants, as well as America at large,” recalls Chin.

MIT senior Lilly Chin, winner of the 2017 Jeopardy! College Championship, speaks to Paris Alston of WGBH about her experience on the competition. “I wasn’t expecting to get in, I just wanted to have some fun with it,” Chin says about initially trying out for the quiz show.

Lilly Chin, a senior at MIT majoring in electrical engineering and computer science, won the 2017 Jeopardy! College Championship, reports Kenneth Singletary for The Boston Globe. Singletary notes that “for her efforts, Chin won $100,000 and a chance to play on the Tournament of Champions.”

Lilly Chin, a senior in MIT’s Department of Electrical Engineering and Computer Science, is one of 15 contestants on the 2017 Jeopardy! College Championship. Chin has advanced through the quarter and semifinal rounds and will compete in the final round of the tournament.