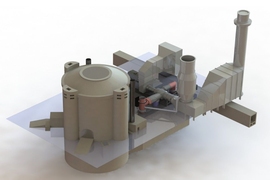 ↓ Download Image
Caption: One proposed application of the firebrick-based thermal storage system is depicted in this hypothetical configuration, where it is coupled to a nuclear power plant to provide easily dispatchable power.

Caption:
One proposed application of the firebrick-based thermal storage system is depicted in this hypothetical configuration, where it is coupled to a nuclear power plant to provide easily dispatchable power.

Firebricks, designed to withstand high heat, have been part of our technological arsenal for at least three millennia, since the era of the Hittites. Now, a proposal from MIT researchers shows this ancient invention could play a key role in enabling the world to switch away from fossil fuels and rely instead on carbon-free energy sources.

The researchers’ idea is to make use of excess electricity produced when demand is low — for example, from wind farms when strong winds are blowing at night — by using electric resistance heaters, which convert electricity into heat. These devices would use the excess electricity to heat up a large mass of firebricks, which can retain the heat for long periods if they are enclosed in an insulated casing. At a later time, the heat could be used directly for industrial processes, or it could feed generators that convert it back to electricity when the power is needed.

The technology itself is old, but its potential usefulness is a new phenomenon, brought about by the rapid rise of intermittent renewable energy sources, and the peculiarities of the way electricity prices are set. Technologically, the system “could have been developed in the 1920s, but there was no market for it then,” says Charles Forsberg, a research scientist in MIT’s Department of Nuclear Science and Engineering and lead author of a research paper describing the plan, that appears this week in the Electricity Journal.

The system, which Forsberg calls FIRES (for FIrebrick Resistance-heated Energy Storage), would in effect raise the minimum price of electricity on the utilities market, which currently can plunge to almost zero at times of high production, such as the middle of a sunny day when solar plant outputs are at their peak.

Electricity prices are determined a day in advance, with a separate price for each one-hour segment of the day. This is done through an auction system between the producers and the distributors of power. Distributors determine how much power they expect to need during each hour, and suppliers bid based on their expected costs for producing that power. Depending on the needs at a given time, these prices can be low, if only baseload natural gas plants are needed, for example, or they can be much higher if the demand requires use of much more expensive “peaking” power plants. At the end of each auction, the distributors figure out how many of the bids will be needed to meet the projected demand, and the price to be paid to all of the suppliers is then determined by the highest-priced bid of all those accepted for that hour.

But that system can lead to odd outcomes when power that is very cheap to produce — solar, wind and nuclear power, whose actual operating costs are vanishingly small — can supply enough to meet the demand. Then, the price the suppliers get for the power can be close to zero, rendering the plants uneconomical.

But by diverting much of that excess output into thermal storage by heating a large mass of firebrick, then selling that heat directly or using it to drive turbines and produce power later when it’s needed, FIRES could essentially set a lower limit on the market price for electricity, which would likely be about the price of natural gas. That, in turn, could help to make more carbon-free power sources, such as solar, wind, and nuclear, more profitable and thus encourage their expansion.

The collapse of electricity prices due to expansion of nonfossil energy is already happening and will continue to increase as renewable energy installations increase. “In electricity markets such as Iowa, California, and Germany, the price of electricity drops to near zero at times of high wind or solar output,” Forsberg says. Once the amount of generating capacity provided by solar power reaches about 15 percent of the total generating mix, or when wind power reaches 30 percent of the total, building such installations can become unprofitable unless there is a sufficient storage capacity to absorb the excess for later use.

At present, the options for storing excess electricity are essentially limited to batteries or pumped hydroelectric systems. By contrast, the low-tech firebrick thermal storage system would cost anywhere from one-tenth to one-fortieth as much as either of those options, Forsberg says.

Firebrick itself is just a variant of ordinary bricks, made from clays that are capable of withstanding much higher temperatures, ranging up to 1,600 degrees Celsius or more. Virtually dirt cheap to produce — clay is, after all, just a particular kind of dirt — such high-temperature bricks have been found in archeological sites dating back to around 3,500 years ago, such as in iron-smelting kilns built by the Hittites in what is now Turkey. The fact that these bricks have survived until now testifies to their durability.

Nowadays, by varying the chemical composition of the clay, firebrick can be made with a variety of properties. For example, bricks to be placed in the center of the assemblage could have high thermal conductivity, so that they can easily take in heat from the resistance heaters. These bricks could easily give up that heat to cold air being blown through the mass to carry away the heat for industrial use. But the bricks used for the outer parts of the structure could have very low thermal conductivity, thus creating an insulating shell to help retain the heat of the central stack.

The current limit on FIRES is the resistance heaters. Existing low-cost, reliable heaters only go to about 850 C. Ultimately, Forsberg suggests, the bricks themselves could be made electrically conductive, so that they could act as low-cost resistance heaters on their own, both producing and storing the heat. A promising material for these firebricks is silicon carbide, which is already produced at massive scales for uses such as sandpaper. China currently produces about a million tons of it per year, Forsberg says.

Turning that heat back into electricity is a bigger technical challenge, so that would likely be a next-generation version of the FIRES system, he says. That’s because producing electricity with the conventional turbines used for natural gas power plants requires a much higher temperature. While industrial process heat is viable at about 800 C, he says, the turbines need compressed air heated to at least 1,600 C. Ordinary resistance heaters can’t go that high, and such systems will also need an enclosing pressure vessel to handle the needed air pressure. But the advantage would be great: Doubling the operating temperature would cut in half the cost of the heat produced, Forsberg says.

The next step, Forsberg says, will be to set up some full-scale prototype units to prove the principles in real-world conditions, something he expects will happen by 2020. “We’re finding the right customers for those initial units,” he says, which would probably be a company such as an ethanol refinery, which uses a lot of heat, located near a sizable wind-turbine installation.

“I believe that FIRES is an innovative approach to solve a real power grid problem,” says Regis Matzie, the now-retired Chief Technical Officer at Westinghouse Electric, who was not involved in this work. The way prices for electricity are determined in this country produces a “skewed electricity market [that] produces low or even negative market prices when a significant fraction of electrical energy on the grid is provided by renewables,” he says. “A very positive way to correct this trend would be to deploy an economical way of storing the energy generated during low electricity market prices, e.g., when the renewables are generating a large amount of electricity, and then releasing this stored energy when the market prices are high… FIRES provides a potentially economic way to do this, but would probably need a demonstration to establish the operability and the economics.”

‘Hybrid’ nuclear plants could make a dent in carbon emissions