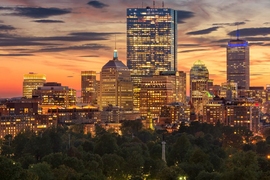 ↓ Download Image
Caption: On Sept. 28 at the Boch Center Wang Theatre in downtown Boston, more than a thousand New England alumni will join President L. Rafael Reif in celebrating the countless ways that the MIT community has contributed to the region’s vitality and unmistakable character — and to envision, together, the positive change this community can have on the entire world.

Caption:
On Sept. 28 at the Boch Center Wang Theatre in downtown Boston, more than a thousand New England alumni will join President L. Rafael Reif in celebrating the countless ways that the MIT community has contributed to the region’s vitality and unmistakable character — and to envision, together, the positive change this community can have on the entire world.

The history of MIT is one of self-transformation — of a university “restlessly reinventing itself,” as President L. Rafael Reif has put it. But how MIT has changed is just part of its story. The people whose lives and careers are shaped at MIT go out in turn to improve the world around them. This is the premise of the MIT Campaign for a Better World, and its promise: that MIT’s talent and resources are directed toward humanity’s greatest challenges.

The campaign launched in May 2016 with a celebration on campus, then gathered momentum through Better World events that have brought together alumni and friends of MIT in cities worldwide. This week, the series comes home to Boston. On the eve of a local gathering that considers the Institute’s impact on the world, it’s an opportune moment to review the contributions — many more than can be listed here — that MIT’s faculty and alumni have made just beyond the campus, in Cambridge, Boston, and greater New England.

Perhaps MIT’s clearest influence on its environs is at the intersection of life sciences and technology. East Cambridge’s Kendall Square has emerged as a biotech hub around neighborhood anchors like Biogen, founded by Institute Professor and Nobel laureate Phillip Sharp.

Among the numerous new players are TARIS Biomedical, a drug-delivery spinout of the Cima and Langer Labs developed with support from MIT’s Deshpande Center for Technological Innovation, and Cognito Therapeutics, which applies research from the Tsai and Boyden Labs to address neurodegenerative diseases such as Alzheimer’s.

Beyond bio, an increasing concentration of tech companies has taken root in Massachusetts over the past six decades, many founded by MIT alumni: Analog Devices, Bose, Akamai, HubSpot, iRobot, Boston Dynamics, and scores more. MIT’s cadre of on-campus entrepreneurial resources continues to feed new streams of startups and to bolster Kendall Square’s growth as a thriving innovation ecosystem.

Also cultivating the area’s entrepreneurship are the Cambridge Innovation Center, under founder and CEO Tim Rowe MBA ’95; MassChallenge, the brainchild of John Harthorne MBA ’07; and The Engine, a new enterprise from MIT supporting “tough tech” ventures.

If you find yourself shredding “More Than a Feeling” on a Harmonix guitar, you’ve got yet another alumnus to thank: That rock anthem, along with the famous band named for its Boston hometown, are the creations of Tom Scholz ’69, SM ’70.

MIT people have looked out for the health of New Englanders since early in the Institute’s history — from Ellen Swallow Richards, Class of 1873, whose studies of Massachusetts drinking water led to the nation’s first state water-quality standards, to W. Gerald Austen ’51, who developed a world-class surgical program at Massachusetts General Hospital (MGH).

Today, MIT researchers and alumni continue to boost regional health. For example, assistant professor of urban studies and planning Mariana Arcaya MCP ’08 is studying the effect of transit-oriented development projects on the health of Boston-area residents, and Roseanna Means ’76, SM ’77 leads a nonprofit that provides medical care to homeless women in local shelters. The thriving Massachusetts health care plan, signed into law in 2006, is informed by the research of economics faculty member Jonathan Gruber ’87.

At MGH, Retsef Levi, the J. Spencer Standish (1945) Professor of Management, implemented a system that halved the number of patients facing long waits to enter surgery. The MIT/MGH connection continues to strengthen via such individuals as Emery Brown, MIT’s Edward Hood Taplin Professor of Medical Engineering and Computational Neuroscience, who applies his insights into anesthesia in the MGH operating room; Alice Flaherty PhD ’92, director of MGH Neurology’s Brain Stimulator Unit; and Joan Whitten Miller ’80, the hospital’s chief of ophthalmology.

Landmarks of the past and future

Looking further into the past, you’ll find notable sculptures by one-time MIT student Daniel Chester French dotting New England — including, it happens, in Harvard Yard. And MIT alumni have not just created but helped to preserve important local landmarks. As executive director of Boston’s Museum of African American History, for example, Sylvia Watts McKinney MCP ’83 oversaw the restoration of key Boston and Nantucket sites as monuments to the history of black Americans.

How Bostonians get from point A to B is an enduring concern for MIT people. Serving tenures in the 1970s and 1980s as the Boston mayor’s transportation advisor and the state’s secretary of transportation, Frederick Salvucci ’61, SM ’62 (now of the MIT Transit Lab) became what MIT Technology Review has called “The Man Behind the Big Dig.” He was a driving force — along with others, such as visionary developer Norman B. Leventhal ’38 — in replacing Boston’s elevated Central Artery with an underground highway.

Focusing on education at the primary and secondary level, researchers in MIT’s Department of Economics provide rigorous evidence to guide Massachusetts policy on charter schools through the School Effectiveness and Inequality Initiative. And Danielle Olson ’14 is boosting STEAM education in Dorchester schools through her startup Gique.

On Sept. 28 at the Boch Center Wang Theatre in downtown Boston, more than a thousand New England alumni will join President Reif in celebrating these and countless other ways that the MIT community has contributed to the region’s vitality and unmistakable character — and to envision, together, the positive change this community can have on the entire world. For details, visit https://betterworld.mit.edu/events/boston.