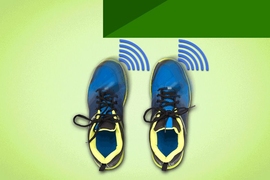 ↓ Download Image
Caption: Researchers are developing a new boot with built-in sensors and tiny “haptic” motors, whose vibrations can guide the wearer around or over obstacles. Vibrations will jump from low to high intensity when the wearer is at risk of colliding with an obstacle.

Caption:
Researchers are developing a new boot with built-in sensors and tiny “haptic” motors, whose vibrations can guide the wearer around or over obstacles. Vibrations will jump from low to high intensity when the wearer is at risk of colliding with an obstacle.
Credits:
Illustration: Jose-Luis Olivares/MIT

Video of astronauts tripping over moon rocks can make for entertaining Internet viewing, but falls in space can jeopardize astronauts’ missions and even their lives. Getting to one’s feet in a bulky, pressurized spacesuit can consume time and precious oxygen reserves, and falls increase the risk that the suit will be punctured.

Most falls happen because spacesuits limit astronauts’ ability to both see and feel the terrain around them, so researchers from MIT’s Department of Aeronautics and Astronautics (AeroAstro) and the Charles Stark Draper Laboratory in Cambridge, Massachusetts are developing a new space boot with built-in sensors and tiny “haptic” motors, whose vibrations can guide the wearer around or over obstacles.

This week, at the International Conference on Human-Computer Interaction, the researchers presented the results of a preliminary study designed to determine what types of stimuli, administered to what parts of the foot, could provide the best navigation cues. On the basis of that study, they’re planning further trials using a prototype of the boot.

The work could also have applications in the design of navigation systems for the visually impaired. The development of such systems has been hampered by a lack of efficient and reliable means of communicating spatial information to users.

“A lot of students in my lab are looking at this question of how you map wearable-sensor information to a visual display, or a tactile display, or an auditory display, in a way that can be understood by a nonexpert in sensor technologies,” says Leia Stirling, an assistant professor of AeroAstro and an associate faculty member at MIT’s Institute for Medical Engineering and Science, whose group led the work. “This initial pilot study allowed Alison [Gibson, a graduate student in AeroAstro and first author on the paper] to learn about how she could create a language for that mapping.” Gibson and Stirling are joined on the paper by Andrea Webb, a psychophysiologist at Draper.

What, where, and when

For the pilot study, Gibson developed a device that spaced six haptic motors around each of a subject’s feet — one motor each at the heel, big toe, and instep, and three motors along the outer edge of the foot. The intensity of the motors’ vibrations could be varied continuously between minimum and maximum settings.

A subject placed his or her feet in the device while seated before a computer. Software asked the subjects to indicate when they felt vibrations and at what locations on the foot. Tests were conducted under two conditions. In the first, the subjects focused on the stimuli to their feet. In the second, they were distracted by a simple cognitive test: The software would flash a random number on the screen, and the subject would count upward from that number by threes. The vibration of one of the motors would interrupt the counting, and the subject would report on the sensation.

Each subject was asked to report on more than 500 individual stimuli, divided between the two conditions.

The researchers had envisioned that variations in the intensity of the motors’ vibrations could indicate distance to obstacles, as measured by sensors built into the boot. But they found that when distracted by cognitive tests, subjects had difficulty identifying steady increases in intensity. And even when they were attending to the stimuli, the subjects still had difficulty identifying decreases in intensity.

On the basis of the study results, Gibson is developing a boot with motors at only three locations: at the toe, at the heel, and toward the front of the outside of the foot — away from the middle location where stimuli sometimes didn’t register.

Stimuli will not be varied continuously, but they will jump from low to high intensity when the wearer is at risk of colliding with an obstacle. The high-intensity stimuli will also be pulsed, to help distinguish them from the low-intensity ones.

In principle, the motor at the side of the foot could help guide the user around obstacles, but the first trial of the boot will concentrate entirely on the problem of stepping over obstacles of different heights. The researchers will also be evaluating the haptic signals in conjunction with, and separately from, visual signals, to determine the optimal method of conveying spatial information.

“Trying to provide people with more information about the environment — especially when not only vision but other sensory information, auditory as well as proprioception, is compromised — is a really good idea,” says Shirley Rietdyk, a professor of health and kinesiology at Purdue University who studies the neurology and biomechanics of falls. “From my perspective, [this work could be useful] not only for astronauts but for firemen, who have well-documented issues interacting with their environment, and for people with compromised sensory systems, such as older adults and people with disease and disorders.”

Rietdyk points out that there’s some prior work on using vibrating insoles to alert people with impaired proprioception — physical self-awareness — when, for instance, they’re beginning to tip off-balance. “The big question is whether people will attend to it, which is why I really like the work that they did,” she says. “They came all the way back to the starting point and said, ‘Okay, where are people going to detect this most, and what is least likely to be compromised by attention-demanding tasks?’ Going back to the start, rather than diving into the deep end of the pool, was, I thought, I really good approach.”

In this article and video, Prof. Leia Stirling speaks with Devin Coldewey of TechCrunch about her research aimed at helping astronauts avoid stumbles and falls in space. Stirling explained that she and her colleagues developed a haptic feedback system to “potentially help someone navigate their environment and avoid obstacles at the same time.”

In this video, Prof. Leia Stirling and graduate student Alison Gibson speak with Wired about the vibrating boots they developed to help astronauts avoid obstacles. “To be able to provide technologies that can assist the astronauts and actually make a group of people have more capability, that’s really exciting,” explains Stirling.

Space.com reporter Samantha Mathewson writes that MIT researchers have developed a vibrating boot to help astronauts avoid obstacles. Prof. Leia Stirling explains that she hopes the boot will make astronauts “more confident and efficient during extravehicular activities and may decrease their injury risk due to trips and falls.”

Samantha Cole writes for Popular Science that researchers from MIT’s Department of Aeronautics and Astronautics are developing boots that pulse and vibrate to warn the wearer of nearby obstacles. Cole explains that the researchers see the technology “as valuable not only for space walks, but for firefighters, the elderly, or those with compromised sensory systems.”