Harnessing the power of citizens 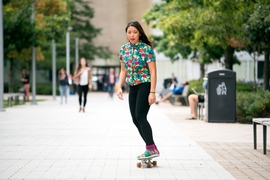 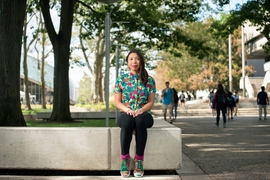 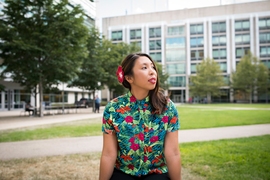 Caption:
“If there's any place that I can do the weird stuff that I like to do, it would be in academia, and it would be at MIT,” says PhD student Lily Bui. “I'm not quite satisfied with being pigeonholed into one role, and I think that's just going to stay the case for the rest of my life.”

Lily Bui’s path to her PhD program in urban studies and planning at MIT has been a meandering one, yet along the way she has followed her passions while finding new ways to support communities at the grassroots level.

Whether she is helping citizens deploy air-quality monitors, improving cycling throughout a city, or gathering hyperlocal stories about climate change, Bui always thinks big, harnessing the power of regular people to make a difference in the world.

An indirect path to MIT

Bui, who grew up in California, earned her bachelor’s degree at the University of California at Irvine, where she majored in Spanish and international relations. Unsure of what to do next, Bui headed to Capitol Hill for a summer internship with her congresswoman, Rep. Loretta Sanchez, where she had had an up-close view of how policies are made. She then pivoted into an AmeriCorps program in Maryland, working with the Asian Pacific American community on issues ranging from housing, to citizenship, to language access. The back-to-back experiences helped Bui realize that she wanted to work with citizens on the ground, but she wasn’t sure exactly how.

“It was another moment of being lost for me, and trying to wander off to the next thing,” recalls Bui. “And as it happens, music was the next thing.”

Bui, who sings and plays the piano, guitar, and ukulele, recorded an album with some musicians she met in Maryland, then moved home to California where she continued playing music. She also took an odd job as a ghostwriter. Again, in a moment of uncertainty, her next move revealed itself.

“I had all this experience producing audio from the music stuff, and interest in public affairs from everything I had done before,” she says. “And suddenly I was like, hmm, what if I tried out public radio?”

Bui developed her reporting and storytelling skills while working first with WBEZ in Chicago and later at the Public Radio Exchange in Boston. At the same time, she began volunteering with citizen science projects, tackling difficult questions such as how to engage communities in answering scientific questions, and how to give credit to citizens who carry out scientific research. However, Bui soon realized that she wanted to learn more broadly about critical issues in media studies, so she applied to the master’s program in comparative media studies at MIT.

Working from the bottom up

Although Bui entered the program intent on studying the media landscape, she instead combined her interests in citizen science and public media and developed a master’s project that focused on how communities can use do-it-yourself sensors to monitor air quality.

With support from the Priscilla King Gray Fellowship and MIT International Science and Technology Initiatives (MISTI), Bui was off to Christchurch, New Zealand, where she worked with a nonprofit called Sensing City that was attempting to install inexpensive air-quality monitors around the city. Christchurch, which is still rebuilding after a series of major earthquakes, is particularly vulnerable to air pollution due to its location at the bottom of a hill, an issue compounded by the fact that many citizens use wood-burning stoves. Sensing City thought distributing cheap sensors might help the people of Christchurch better understand the severity of the problem while gathering large quantities of valuable data. However, Bui soon realized that progress would be slow due to conflicts over who would own the data.

“When I got there I had all these ideas about what we could do, and I had a plan to organize people around it,” recalls Bui. “But then [I saw], this is the reality of it, and this is how we're going to pivot, and that still was really valuable for understanding what the limitations are, and how intellectual property is a big problem when it comes to multiple stakeholders trying to take ownership over the same idea.”

Not one to sit idle, Bui jumped into an ongoing bike-mapping project in Christchurch. The basic idea was to build a mobile app where cyclists could input their routes, creating a large, crowdsourced database of routes to inform urban planners about where bike lanes were most needed. Bui helped different advocacy groups talk to each other throughout the process.

“That's what really introduced me to what data could do for urban planning,” says Bui. “I thought, I could do more of this in the future. Instead of just the media part, it was more [about having] a direct impact on a community.”

Bui found a way to combine her media background and her interest in helping communities when she became involved in a project called ISeeChange, directed by Julia Kumari Drapkin, that is taking a grassroots, citizen observation approach to climate change storytelling.

The project started small: Rural farmers in the pilot community of Paonia, Colorado used the website to input observations from their own backyards, such as when the tomatoes came in, or how many storms there were, creating a record of environmental change in the process. The project has since expanded considerably. Through a collaboration with NASA, ISeeChange has incorporated large-scale satellite data of carbon dioxide levels in the atmosphere alongside the hyperlocal environmental observations, and the website now compiles environmental observations from people all over the world.

“The idea is to give people ownership over the climate change discussion, because sometimes it feels very far removed from our everyday lives,” says Bui. “But really it's something that on an everyday level affects us and that we can contribute toward [solving], whether it's by taking direct action and installing solar panels, or helping document the change as it happens so that other people are aware that it's happening.”

A shift in perspective

As Bui began nearing the end of her degree in comparative media studies, a practicum class called Crowdsourced City that she took with Sarah Williams, assistant professor of urban planning and director of the Civic Data Design Lab, helped her chart her path forward.

“What that format means is: It's not just a class where you sit and you learn how to write this code or map this thing and then turn in a paper,” explains Bui. “It's more like, we're going to Nairobi and we're partnering with students from the University of Nairobi to address a problem.”

The class focused its research efforts on an informal network of buses called the matatu system that is used by many people in Nairobi to commute to work. Because the matatu system is not operated by the government, little is known at the municipal level about how it functions. Bui and her classmates spent their week in Nairobi collaborating with local students and meeting with insurance companies, drivers, city planners, and the national transportation service, in an effort to figure out how the city could improve data collection.

“This was the first time that I had worked in the context of a developing country, and I realized that the need is so much greater in these contexts. So that kind of changed the way that I thought about things,” says Bui. “How I want to frame future research is to look at where the need is much greater, instead of focusing on cities that already have a lot of resources.”

The course, along with others she took, showed Bui that there were opportunities in academia to do practice-based work, so she decided to pursue a PhD in urban studies and planning, advised by Williams. Now, in the first year of her PhD, Bui isn’t sure exactly where her degree will take her, but she is open to the possibilities and eager to get started.

“If there's any place that I can do the weird stuff that I like to do, it would be in academia, and it would be at MIT,” says Bui. “I'm not quite satisfied with being pigeonholed into one role, and I think that's just going to stay the case for the rest of my life.”

Report: How interactive documentaries represent a new form of innovation in digital journalism