A jumpstart for entrepreneurs 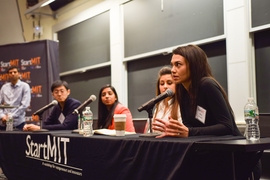 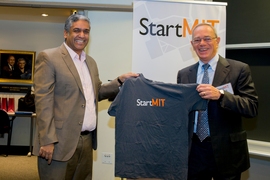 There are myriad challenges for entrepreneurs when first starting a company: fundraising, recruiting talent, developing an innovative product, networking, scaling, and — not least of all — finding customers.

StartMIT, a course offered during MIT’s Independent Activities Period between semesters, aims to help engineering students navigate those early challenges, with advice from founders who have been through it all. The course is co-organized by the Department of Electrical Engineering and Computer Science (EECS) and the MIT Innovation Initiative.

“The aim is to give our students and postdocs … a rich view of what it means to be an entrepreneur,” says StartMIT head organizer and EECS department head Anantha Chandrakasan. “In three weeks, [participants] walk away with an understanding of what entrepreneurship is all about, the different views, and learning how to put a pitch together, among other things.”

During the final two days, student groups were required to deliver brief pitches for commercial ideas they formed during the course. These included hacking-recruitment services, smart windows, new airplane-de-icing technologies, various apps, and waterproof purses, among other ideas. The course also included field trips to local companies — including iRobot, Ministry of Supply, and Kayak — as well as the Cambridge Innovation Center and MassChallenge startup incubators.

Around 100 engineering students participated in this year’s StartMIT, now in its third year. On Jan. 14, President L. Rafael Reif dropped by Building 34-101, where most of the talks were held, to stress the importance of StartMIT in carrying out the Institute’s mission of using commercial innovations to make tangible impact on society.

“There are many ways in which we can do good … and one of those ways is to start companies,” he said, adding: “By learning from experts and by learning from one another, you’re on your way to fulfilling not just … the MIT mission, but fulfilling your own mission in starting companies.”

In three years, more than 100 projects have been developed through StartMIT, including Smarking (2014), now a successful company that uses big data analytics to help parking-garage managers maximize pricing and availability; GelSight (2014), which is commercializing sensors that can make 3-D maps of surfaces and could be used for more sensitive robotics fingertips; and Belleds Q (2015), which is developing a consumer product that uses streaming music to control wireless smart LED bulbs in homes.

In her Jan. 13 talk, MIT professor Sangeeta Bhatia, who has launched several biotech companies, gave a behind-the-scenes look at the sometimes-arduous process of taking innovations from lab to market — “to highlight everything you don’t see in the press,” she said.

In 2008, Bhatia, the John J. and Dorothy Wilson Professor in the Institute for Medical Engineering and Science and the Department of Electrical Engineering and Computer Science, spun out 14 years of MIT research into Hepregen, now a successful company.

Hepregen’s “micro-liver” platform allows liver cells to function outside the body for up to six weeks, for use by researchers and pharmaceutical firms. Among other topics, Bhatia discussed struggles of developing the technology for commercial use, manufacturing hassles, and anxieties of dealing with big-name pharmaceutical customers.

“What did we learn? We learned it takes a long time [to start a biotech company],” Bhatia said. However, “as engineers and scientists, translation of your technology to make an impact through commercialization is actually imperative.”

In a kickoff talk on Jan. 11, EECS lecturer Christina Chase, a former Entrepreneur-in-Residence at the Martin Trust Center for MIT Entrepreneurship and founder of several tech companies, detailed key reasons tech startups fail. Among these, she said, are scaling a company too soon by hiring too many employees, splurging on machinery, or renting unnecessarily large office space.

“Ultimately, understand ‘what can I not spend my money on,’ because cash is oxygen to your company,” said Chase, who also led activities on discovering value propositions and conducting mock customer interviews.

While hearing from seasoned entrepreneurs was certainly informative, mechanical engineering senior Keertan Kini connected most with a panel of recent MIT alumni entrepreneurs.

“Hearing from people who are just recently out of MIT … was incredibly meaningful and incredibly impactful,” he says. The alumni could “relate easily to our experiences, or some of the doubts we have about our own abilities, or discuss how certain classes might actually make an impact, or relate to the challenges we’d faced as first-time founders because we don’t have the track record that a lot of the other professionals have.”

With support from MIT’s Sandbox Innovation Fund, Kini and his partner are now prototyping their StartMIT project, called Ember, an interactive cooking app that uses voice commands to walk people through recipes.

A talk by MIT alumnus Jeremy Conrad ’06, founding partner of Lemnos Labs, a seed-stage investment firm and incubator in San Francisco, resonated with freshman Anelise Newman, who developed a sewing-education startup for StartMIT.

Conrad’s talk, Newman said, introduced her to one important and sometimes overlooked facet of entrepreneurship: networking. In his talk, Conrad discussed how he’d rush around to make sure he was in the same room as an investor, or build relationships with people that could provide an introduction to a person of interest.

“It opened my eyes to the hustle that you have to get used to if you want to be an entrepreneur,” Newman said. “Not only do you need to define your product … you have to define your goals and go about them and vigorously pursue them in whatever way possible.”