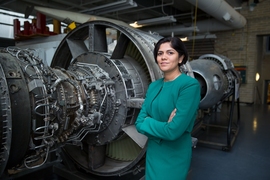 ↓ Download Image
Caption: “We don’t necessarily want [air traffic controllers] to spend the bandwidth on processing 40 pieces of information. Instead, we can tell them the three top choices,” says Hamsa Balakrishnan, associate professor of aeronautics and astronautics at MIT and a member of MIT’s Institute for Data, Systems, and Society.

Caption:
“We don’t necessarily want [air traffic controllers] to spend the bandwidth on processing 40 pieces of information. Instead, we can tell them the three top choices,” says Hamsa Balakrishnan, associate professor of aeronautics and astronautics at MIT and a member of MIT’s Institute for Data, Systems, and Society.

Over the next 25 years, the number of passengers flying through U.S. airport hubs is expected to skyrocket by almost 70 percent, to more than 900 million passengers per year. This projected boom in commercial fliers will almost certainly add new planes to an already packed airspace.

Any local delays, from a congested runway to a weather-related cancellation, could ripple through the aviation system and jam up a significant portion of it, making air traffic controllers’ jobs increasingly difficult.

“The system is large, and there’s a lot of connectivity,” says Hamsa Balakrishnan, associate professor of aeronautics and astronautics at MIT. “How do you move along today’s system to be more efficient, and at the same time think about technologies that are lightweight, that you can implement in the tower now?”

These are questions that Balakrishnan, who was recently awarded tenure, is seeking to answer. She is working with the Federal Aviation Administration and major U.S. airports to upgrade air traffic control tools in a way that can be easily integrated into the existing infrastructure. These tools are aimed at predicting and preventing air traffic delays, both at individual airports and across the aviation system. They will also ultimately make controllers’ jobs easier.

“We don’t necessarily want [controllers] to spend the bandwidth on processing 40 pieces of information,” says Balakrishnan, who is a member of MIT’s Institute for Data, Systems, and Society. “Instead, we can tell them the three top choices, and the difference between those choices would be something only a human could tell.”

Most recently Balakrishnan has developed algorithms to prevent congestion on airport runways. Large hubs like New York’s John F. Kennedy International Airport can experience significant jams, with up to 40 planes queuing up at a time, each idling in line — and generating emissions — before finally taking off. Balakrishnan found that runways run more smoothly, with less idling time, if controllers simply hold planes at the gate for a few extra minutes. She has developed a queuing model that predicts the wait time for each plane before takeoff, given weather conditions, runway traffic, and arriving schedules, and she has calculated the optimal times when planes should push back from the gate.

In reality, air traffic controllers may also be balancing “human constraints,” such as maintaining a certain level of fairness in determining which plane lines up first. That’s why a large part of Balakrishnan’s work also involves talking directly with air traffic controllers and operators, to understand all the factors that impact their decision making.

“You can’t purely look at the theory to design these systems,” Balakrishnan says. “A lot of the constraints they need to work within are unwritten, and you want to be as nondestructive as possible, in a way that a minor change does not increase their workload. Everybody understands in these systems that you have to modernize. If you’re willing to listen, people are very willing to tell you about what it looks like from where they are.”

Balakrishnan was born in Madras, now Chennai, a large metropolitan city in southern India, and was raised by academics: Her father is a recently retired physics professor at the Indian Institute of Technology at Madras, and her mother is a retired professor of physics at the Institute of Mathematical Sciences, in Chennai. Her brother, Hari, is now at MIT as the Fujitsu Professor of Electrical Engineering and Computer Science.

“A lot of people we knew were academics, and people used to talk about their research at our home,” Balakrishnan recalls. “I was surrounded by [academia] growing up.”

Following the family’s academic path wasn’t necessarily Balakrishnan’s goal, but as an undergraduate at the Indian Institute of Technology at Madras she found that she enjoyed math and physics. She eventually gravitated to computational fluid dynamics, as applied to aerospace engineering.

“My parents are physicists, and maybe I wanted to rebel, so I went into engineering,” Balakrishnan says, half-jokingly. “I liked practical things.”

She applied to graduate school at Stanford University, and after she was accepted, she took her first-ever plane ride, from India to the U.S.

“Air travel is much more affordable and common now, even in India,” Balakrishnan. “It didn’t used to be that way, and a lot of work has been done, even in more developing economies, to make air travel more accessible.”

At Stanford, Balakrishnan shifted her focus from fluid dynamics to air traffic and control-related problems, first looking at ways to track planes in the sky.

“That got me interested in how the rest of the system works,” Balakrishnan says. “I started looking at all the different decisions that are getting made, who’s deciding what, and how do you end up with what you see eventually on the data side, in terms of the aircraft that are moving.”

After graduating from Stanford, she spent eight months at NASA’s Ames Research Center, where she worked on developing control algorithms to reduce airport congestion and optimize the routing of planes on the tarmac.

In 2007, Balakrishnan accepted a faculty position in MIT’s Department of Aeronautics and Astronautics, where she has continued to work on developing algorithms to cut down airport congestion. She’s also finding practical ways to integrate those algorithms in the stressful and often very human environment of an airport’s control tower.

She and her students have tested their algorithms at major airports including Boston’s Logan International, where they made suggestions, in real-time, to controllers about when to push aircraft back from the gate. Those controllers who did take the team’s suggestions observed a surprising outcome: The time-saving method actually cleared traffic, making it easier for planes to cross the tarmac and queue up for takeoff.

“It wasn’t an intended consequence of what we were doing,” Balakrishnan says. “Just by making things calmer and a little more streamlined, it made it easier for them to make decisions in other dimensions.”

Such feedback from controllers, she says, is essential for implementing upgrades in a system that is projected to take on a far higher volume of flights in the next few years.

“You’re designing with the human decision-maker in mind,” Balakrishnan says. “In these systems, that’s a very important thing.”