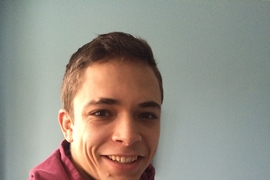 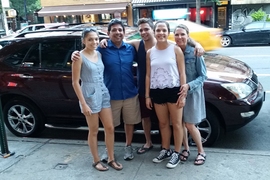 At a memorial service for Drew Esquivel in California, a family friend described a photo that reflected the rising MIT senior’s joyful, adventurous spirit.

Drew and his friends were jumping off some boulders into a pool, all “getting some good air,” according to Steve Vargas, whose family has been close to Drew’s for many years. High above the others, arms outstretched as if shouting “Cowabunga!,” soared Drew.

“He was a go-for-it guy,” Vargas said. “He’d say, ‘Let’s get going.’ ‘I’ll go first.’ ‘We can DO this!’ Drew also had the ability to move others to action and used that wisely to accomplish great things. … We all know he was fiercely competitive, yet he encouraged the success of others and found joy in it.”

On campus at MIT and at the California memorial service in July, which drew hundreds of people from across the country, those who knew Drew recalled a gifted, fun-loving, and compassionate young man, who shared tight bonds with his family and friends.

A native of Healdsburg, California, Drew was majoring in electrical engineering and computer science. He had been living in New York for the summer, working at an internship with the mobile marketing firm Appboy.

MIT faculty knew him as a strong student who connected easily with others, in classes, campus life, and on the wrestling club, of which he was an officer and respected leader.

“His smiling face and gentle manner is imprinted in my mind,” says Arvind, the Johnson Professor of Computer Science and Engineering at MIT and Drew’s academic advisor. “We used to meet to discuss his course registration every term, and he would tell me what was going on his life. I knew he was keen on wrestling but he did not quite fit my naive model of a wrestler, who I thought ought to look more menacing.”

Hari Balakrishnan, the Fujitsu Professor in Electrical Engineering and Computer Science, got to know Drew well while teaching him in Course 6.S062 (Mobile and Sensor Computing), a small class co-taught with Professor Sam Madden, that involved programming for iPhones in XCode.

“Drew was a pleasure to talk to and interact with, both in class and during our project meetings through the term,” says Balakrishnan. “He was energetic, curious, engaged. A great team player. Not only smart technically, but he also had the ability to collaborate well with others and communicate ideas well.”

In Balakrishnan’s course, Drew’s group developed a location-based, gesture-encrypted messaging application that allowed users to send each other targeted messages based on their locations.

Drew also participated in the Undergraduate Research Opportunities Program (UROP) in the Laboratory for Computational Physiology, where he worked on developing electronic medical record systems for underserved areas.

In high school, Drew attended the distinguished Summer Science Program in New Mexico. When selected for the prestigious scholarship that would give him a full ride to MIT, Drew told the Healdsburg Tribune, “I have been thinking of college since second grade. I always had a dream school in mind and that made it easy to focus on school.”

A member of MIT’s wrestling club, Drew was named most valuable player in 2015 and rookie of the year in 2014. He was team captain, a three-time National Collegiate Wrestling Association (NCWA) national qualifier, and a NCWA Northeast conference finalist.

In high school, Drew was a varsity swimmer as well as wrestler, and he ran cross-country. He was an Eagle Scout who completed 50-mile hikes with his troop in the High Sierras, and he adventured in the California outdoors with his family and their friends, backpacking, kayaking, and skiing.

Drew’s adventurous spirit and strong work ethic led him to scale many summits, both literal and figurative, says his mother, Susanne Esquivel. “He always ‘bagged the peak,’ thought outside the box to solve problems, strove to be the best, found joy in helping others, put family and friends first, and had fun,” she says.

Drew was very “deliberate” about where he applied to college, according to Susanne Esquivel, who says he was “really only interested in Stanford or MIT.” He was offered early admission to Stanford, in his home state, but he had also applied for and received a James Family Foundation scholarship, available at the time to a student at his high school, which provided full tuition to a highly competitive, out-of-state school.

So, Drew attended MIT’s Campus Preview Weekend and returned “excited and firmly committed to MIT,” Susanne says: “He felt he had found the right environment for learning, competing, and making life-long friends. He was right. He received the best education in the world and took advantage of amazing opportunities and making a difference.”

On campus, Drew became very close with his friends, including his fraternity brothers at Lambda Chi Alpha.

“I remember meeting Drew at a fraternity event in the fall of 2013. I noticed immediately how lively and happy he was to be there meeting all these new people — his energy was infectious,” said rising senior Zak Psaras, in a eulogy at the memorial service.

“Drew knew how to make everyone laugh and would go out of his way to make others feel included, Psaras said. “He never failed to see the good in others. For as comical as Drew was, he always knew when to be serious. If he noticed one of his friends was feeling down, he would be the first to check in. He always went out of his way to make conversation with those who needed it most. When he would ask ‘How's it going, man?’ in the most nonchalant, genuine way possible, you knew he wanted the real answer.

“We all deserve to have a Drew in our lives,” Psaras said.

Drew is survived by his parents, Susanne and Andrew Esquivel, and his sisters, Elisabeth and Emma, all of Healdsburg, California; his grandfather Donald B. Boyd, PhD of Greenwood, Indiana; and his grandparents Andy and Maria Esquivel of Fremont, Ohio.

His parents have established the Drew Esquivel Memorial Scholarship, through the Rotary Club of Healdsburg Sunrise Foundation. This annual, merit-based scholarship will be available to graduates from Healdsburg High School.

A July 20 gathering at the MIT chapel also honored Drew. It followed an email sent to the MIT community at the request of MIT President L. Rafael Reif, who was traveling at the time, in which Chancellor Cynthia Barnhart extended MIT’s deepest sympathy to Drew’s family and friends. To the larger circle of the accident victims’ MIT friends and connections, “we join you in your shock and grief,” she wrote. A memorial service for Drew at MIT is planned for early in the fall semester.