Chemical sensing on a chip

“Can we take a chemical sensor that originally occupied a benchtop, and put it on a chip that’s two centimeters square?” asks Anuradha Agarwal. “Yes, we can do that.”

Agarwal, a principal research scientist at MIT's Microphotonics Center, and her colleagues have developed miniaturized mid-infrared and far-infrared sensing systems that can be tuned to detect specific materials and their concentrations.

These tiny highly sensitive miniaturized chemical sensors represent big steps toward spectrometry on a chip. Agarwal envisions that these sensors, manufactured at high volume and low cost, “will lead to the ability to create wide sensor networks that can monitor almost everything in life, starting with food, water, air, and light,” she says. The devices also promise major benefits in many roles in industry and defense.

Trained as an electrical engineer, Agarwal originally focused her research in silicon microphotonics on the near-infrared 1,550-nanometer band that is widely adopted for optical communications. However, she broadened her work into longer wavebands, developing on-chip components for communicating in mid-infrared and far-infrared regions of the electromagnetic spectrum, at wavelengths from about 3 microns to about 12 microns.

But more excitingly, Agarwal says, these mid- and far-infrared wavebands open up opportunities for chemical sensing because many molecules show their peak “vibrational responses” in these regions. She decided to explore on-chip sensing devices that work in these wavebands, partnering with MIT faculty Juejun (JJ) Hu and Lionel Kimerling, Kathleen Richardson of the University of Central Florida, and Igor Luzinov of Clemson University. 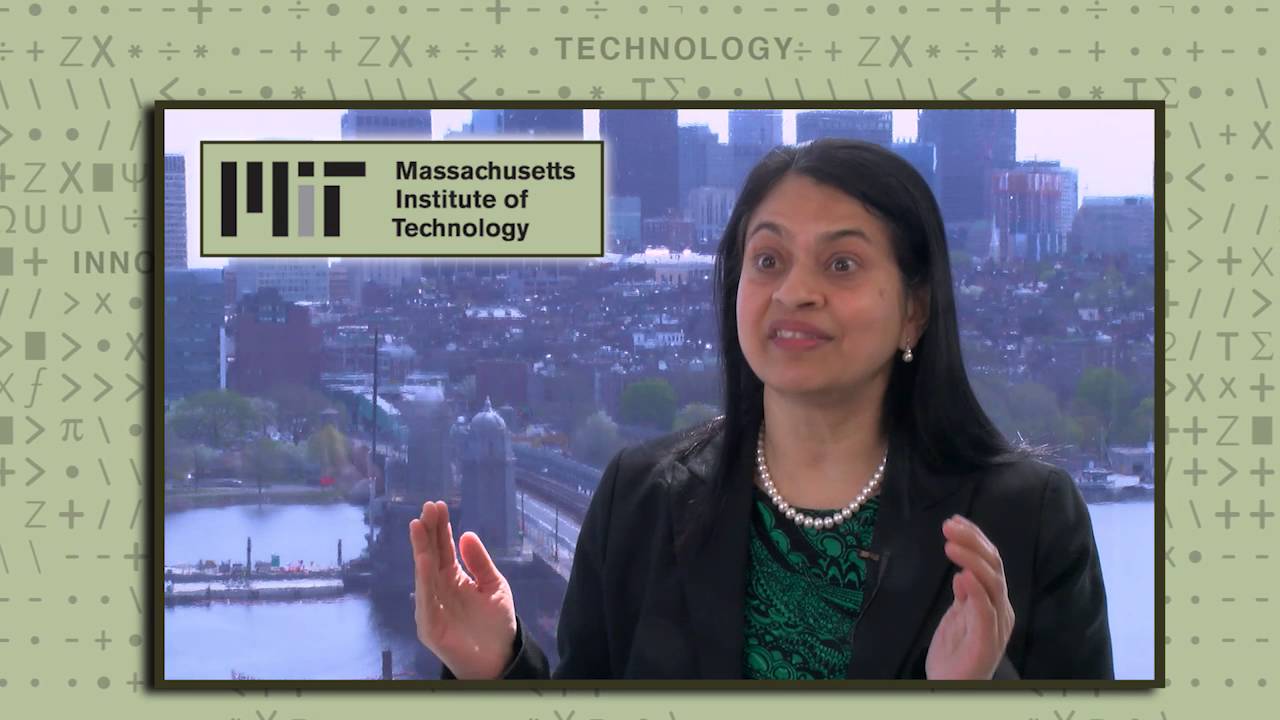 Developing the required longer-wavelength optical components, and combining them on a silicon chip, turned out to be a huge task.

“We had to somehow find materials with tunable optical properties,” she says. “We also had this additional challenge of making all of these on the same silicon platform.”

Agarwal and her colleagues ended up creating sensors out of “chalcogenide” glasses, which contain elements such as sulfur, selenium, and tellurium but not oxygen. By tuning the alloy composition of these glasses, the researchers demonstrated that they could make light sources, waveguides, filters, and detectors. To make sensors specific to targeted chemicals, they designed multi-layer films and nanofoam polymers, and her team successfully made on-chip sensors for a host of chemicals, capitalizing on novel designs and fabrication technology.

Additionally, Agarwal and her coworkers developed “multispectral infrared detector arrays on silicon, which we fondly coined MIDAS,” she says.

Most infrared sensor materials can detect many wavelengths simultaneously over a wide band, she explains, but in some applications you want to detect specific narrow bands at the same time. She and her colleagues managed to build a single-pixel device that can detect two narrow wavebands simultaneously. “We envision that this dual-band sensor can go further into three, four or five narrow bands all on the same pixel, and that’s something quite new,” she says.

MIDAS can be used for hyperspectral imaging (across the electromagnetic spectrum), infrared spectroscopy, and target identification, Agarwal says. “We also envision using it for chemical sensing when MIDAS is integrated as the detector of the sensing chip.”

These miniaturized mid-infrared and far-infrared designs have opened up huge opportunities for chemical and biological sensing, Agarwal says.

One potential example in health care is monitoring the blood of newborns to see if their blood electrolytes are on target. “It would be great if we could do all of these tests with just a single pinprick, a single drop of blood,” she says. Another application under study in defense is detecting small quantities of chemicals that are used in contraband activities, with disposable chemical sensors that can be remotely monitored.

Among industrial applications, these infrared sensors could fill many roles in petroleum. For example, oil companies often deal with high-pressure buildups in their pipelines by flaring gas. That wastes the gas, and remotely monitoring the entire pipeline for these buildups could minimize the waste.

In a project launched last year, Agarwal is collaborating with researchers in the United Arab Emirates on water-quality monitoring, including early warning for ocean algal blooms that can foul up desalination plants. “We decided to make a sensor that can not only sense when huge amounts of algae are present in the water but can also sense the nutrients required by these algae,” she says. “If we can sense both the algae and the chemical nutrients simultaneously on the same platform, we can then predict an algal bloom event and help save lives and prevent losses.”

From her perspective, the most exciting applications may come in monitoring the human food chain. “It’s really important to find out what is in the water we drink, and what is in the food we eat that shouldn’t be there,” she says. “The food we consume doesn’t come from our backyards, it comes from all over the world. Can we have a food sensor network that can tell us about the quality of the food that we consume, and can it be made so that it’s not at a huge cost or burden to the producer and the distributor?”

Translating advances in sensing technology into the real world requires partnerships with industry, and Agarwal points out that the MIT Microphotonics Center has a long history of successful collaborations. “We love to work with industry; in fact we pride ourselves on the fact that all of our research has applications out in the real world,” she says.

“It’s very helpful when the industrial partners realize that research is not something that can deliver a product right away,” she adds. “They have to be patient, and take the research slowly, step by step, to the products they desire. We look for long-term partnerships where industry can use the research to their benefit, and the researchers can go on inventing things that will improve the quality of life.”