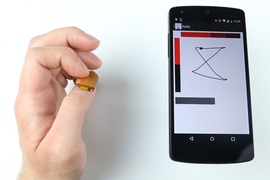 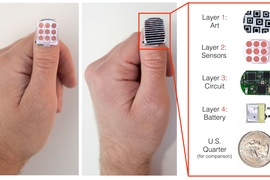 ↓ Download Image
Caption: The first NailO prototype with Rigid PCB and copper printed electrodes. It can be personalized with a top nail-art layer. The 4 layers are shown individually, stacked on top of each other.
Credits: Courtesy of MIT Media Lab 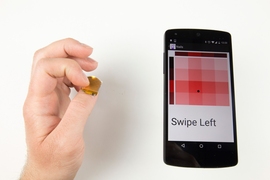 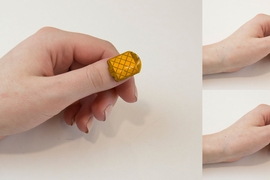 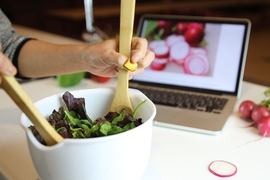 ↓ Download Image
Caption: An example scenario of NailO, where it's being used as remote controller for one-handed input, such as scrolling recipes online while cooking.

Caption:
The first NailO prototype with Rigid PCB and copper printed electrodes. It can be personalized with a top nail-art layer. The 4 layers are shown individually, stacked on top of each other.
Credits:
Courtesy of MIT Media Lab

Caption:
An example scenario of NailO, where it's being used as remote controller for one-handed input, such as scrolling recipes online while cooking.
Credits:
Courtesy of MIT Media Lab

Researchers at the MIT Media Laboratory are developing a new wearable device that turns the user’s thumbnail into a miniature wireless track pad.

They envision that the technology could let users control wireless devices when their hands are full — answering the phone while cooking, for instance. It could also augment other interfaces, allowing someone texting on a cellphone, say, to toggle between symbol sets without interrupting his or her typing. Finally, it could enable subtle communication in circumstances that require it, such as sending a quick text to a child while attending an important meeting.

The researchers describe a prototype of the device, called NailO, in a paper they’re presenting next week at the Association for Computing Machinery’s Computer-Human Interaction conference in Seoul, South Korea.

According to Cindy Hsin-Liu Kao, an MIT graduate student in media arts and sciences and one of the new paper’s lead authors, the device was inspired by the colorful stickers that some women apply to their nails. “It’s a cosmetic product, popular in Asian countries,” says Kao, who is Taiwanese. “When I came here, I was looking for them, but I couldn’t find them, so I’d have my family mail them to me.”

Indeed, the researchers envision that a commercial version of their device would have a detachable membrane on its surface, so that users could coordinate surface patterns with their outfits. To that end, they used capacitive sensing — the same kind of sensing the iPhone’s touch screen relies on — to register touch, since it can tolerate a thin, nonactive layer between the user’s finger and the underlying sensors.

Designed in the MIT Media Lab, NailO is a thumbnail-mounted wireless track pad that controls digital devices. Watch it in action.

As the site for a wearable input device, however, the thumbnail has other advantages: It’s a hard surface with no nerve endings, so a device affixed to it wouldn’t impair movement or cause discomfort. And it’s easily accessed by the other fingers — even when the user is holding something in his or her hand.

“It’s very unobtrusive,” Kao explains. “When I put this on, it becomes part of my body. I have the power to take it off, so it still gives you control over it. But it allows this very close connection to your body.”

To build their prototype, the researchers needed to find a way to pack capacitive sensors, a battery, and three separate chips — a microcontroller, a Bluetooth radio chip, and a capacitive-sensing chip — into a space no larger than a thumbnail. “The hardest part was probably the antenna design,” says Artem Dementyev, a graduate student in media arts and sciences and the paper’s other lead author. “You have to put the antenna far enough away from the chips so that it doesn’t interfere with them.”

Kao and Dementyev are joined on the paper by their advisors, principal research scientist Chris Schmandt and Joe Paradiso, an associate professor of media arts and sciences. Dementyev and Paradiso focused on the circuit design, while Kao and Schmandt concentrated on the software that interprets the signal from the capacitive sensors, filters out the noise, and translates it into movements on screen.

For their initial prototype, the researchers built their sensors by printing copper electrodes on sheets of flexible polyester, which allowed them to experiment with a range of different electrode layouts. But in ongoing experiments, they’re using off-the-shelf sheets of electrodes like those found in some track pads.

They’ve also been in discussion with battery manufacturers — traveling to China to meet with several of them — and have identified a technology that they think could yield a battery that fits in the space of a thumbnail, but is only half a millimeter thick. A special-purpose chip that combines the functions of the microcontroller, radio, and capacitive sensor would further save space.

At such small scales, however, energy efficiency is at a premium, so the device would have to be deactivated when not actually in use. In the new paper, the researchers also report the results of a usability study that compared different techniques for turning it off and on. They found that requiring surface contact with the operator’s finger for just two or three seconds was enough to guard against inadvertent activation and deactivation.

“Keyboards and mice — still — are not going away anytime soon,” says Steve Hodges, who leads the Sensors and Devices group at Microsoft Research in Cambridge, England. “But more and more that’s being complemented by use of our devices and access to our data while we’re on the move. I’ve got desktop, I’ve got a mobile phone, but that’s still not enough. Different ways of displaying and controlling devices while we’re on the go are, I believe, going to be increasingly important.”

“Is it the case that we’ll all be walking around with digital fingernails in five years’ time?” Hodges asks. “Maybe it is. Most likely, we’ll have a little ecosystem of these input devices. Some will be audio based, which is completely hands free. But there are a lot of cases where that’s not going to be appropriate. NailO is interesting because it’s thinking about much more subtle interactions, where gestures or speech input are socially awkward.”

Researchers at the MIT Media Lab have designed a miniature wireless track pad that fits on a thumbnail and allows users to control their devices while their hands are busy, reports Liz Stinson for Wired. “The value of NailO lies in pondering more discreet interaction with our gadgets,” Stinson writes.

MIT researchers have developed a new device that turns your thumb into a miniature wireless track pad, reports Tessa Verenson for TIME Magazine. The device could allow users to “answer the phone while cooking, control their cell phones even when they hands are full or discreetly send a text.”

MIT researchers have developed a thumbnail-mounted sensor that can be used as a wireless track pad, reports Marie Szaniszlo for the Boston Herald. The device, “puts Bluetooth and a battery into a package that you can stick to your fingernail and can send data wirelessly to your phone,” Szaniszlo explains.

Gesture-based computing on the cheap