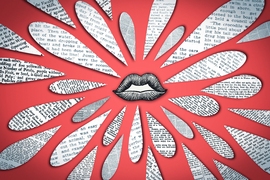 At some point, probably 50,000 to 100,000 years ago, humans began talking to one another in a uniquely complex form. It is easy to imagine this epochal change as cavemen grunting, or hunter-gatherers mumbling and pointing. But in a new paper, an MIT linguist contends that human language likely developed quite rapidly into a sophisticated system: Instead of mumbles and grunts, people deployed syntax and structures resembling the ones we use today.

“The hierarchical complexity found in present-day language is likely to have been present in human language since its emergence,” says Shigeru Miyagawa, Professor of Linguistics and the Kochi Prefecture-John Manjiro Professor in Japanese Language and Culture at MIT, and a co-author of the new paper on the subject.

To be clear, this is not a universally accepted claim: Many scholars believe that humans first started using a kind of “proto-language” — a rudimentary, primitive kind of communication with only a gradual development of words and syntax. But Miyagawa thinks this is not the case. Single words, he believes, bear traces of syntax showing that they must be descended from an older, syntax-laden system, rather than from simple, primal utterances.

“Since we can find syntax within words, there is no reason to consider them as ‘linguistic fossils’ of a prior, presyntax stage,” Miyagawa adds.

Miyagawa has an alternate hypothesis about what created human language: Humans alone, as he has asserted in papers published in recent years, have combined an “expressive” layer of language, as seen in birdsong, with a “lexical” layer, as seen in monkeys who utter isolated sounds with real-world meaning, such as alarm calls. Miyagawa’s “integration hypothesis” holds that whatever first caused them, these layers of language blended quickly and successfully.

Word to the wise

Miyagawa’s paper is published this month in the peer-reviewed journal Frontiers in Psychology. Vitor A. Nobrega of the University of Sao Paulo co-authored the paper.

In the paper, Nobrega and Miyagawa write that a single word can be “internally complex, often as complex as an entire phrase,” making it less likely that words we use today are descended from a presyntax mode of speech.

To see a straightforward example of this in English, take “nationalization,” Miyagawa suggests. It starts with “nation,” a noun; adds “-al” to create an adjective; adds “-iz(a)” to form a verb; and ends with “-tion,” to form another noun, albeit with a new meaning.

“Hierarchical structure is present not only in single words, but also in compounds, which, contrary to the claims of some, are not the structureless fossilized form of a prior stage,” Miyagawa says.

In their paper, Nobrega and Miyagawa hold that the same analysis applies to words in Romance languages that have been described elsewhere as remnants of formless proto-languages. In Italian, “porta asciuga-mani” — literally “carry dry-hands,” but today colloquially meaning “towel holder” — is one such case, they contend, where a compound derived from old words has a clear internal structure. (In this case, “dry hands” is a complement to the verb.)

Miyagawa’s integration hypothesis is connected intellectually to the work of other MIT scholars, such as Noam Chomsky, who have contended that human languages are universally connected and derive from our capacity for using syntax. In forming, this school of thought holds, languages have blended expressive and lexical layers through a system Chomsky has called “Merge.”

“Once Merge has applied integrating these two layers, we have essentially all the features of a full-fledged human language,” Miyagawa says.

Scholars think the integration hypothesis could generate a productive set of research questions. Andrea Moro, a professor of linguistics at the Institute for Advanced Study in Pavia, Italy, who edited the paper, calls it a “very interesting” critique of the idea that human language developed gradually.

However, Moro suggests there is an “intuitive difference” between cases where words assemble to form either a compound word or a sentence. He believes it is possible that studies of the concept of “symmetry-breaking,” a potentially distinctive part of sentence formation, “may offer new empirical data to test the hypothesis and shed light on the birth of human language.”

Brett Smith reports for redOrbit on a new study by Prof. Shigeru Miyagawa on the development of human language. Miyagawa explains his finds that the brain “at some point 75,000 to 100,000 years ago, hit a critical point, and all the resources that nature had provided came together in a Big Bang and language emerged pretty much as we know it today.”