Norman B. Leventhal ’38, visionary developer and philanthropist, dies at 97 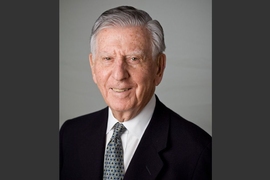 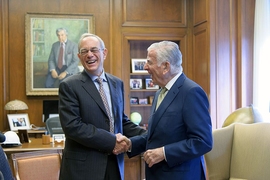 Norman B. Leventhal ’38 — a visionary developer and philanthropist at the center of Boston’s postwar revival, and a conscience of its civic life — died Sunday at age 97. Leventhal was a life member emeritus of the MIT Corporation, and a vital member of the Institute community throughout his decades as an alumnus.

As a co-founder of the firm that became the Beacon Companies, Leventhal was a driving force behind the construction of many of Boston’s signature buildings and public spaces, including Rowes Wharf, Center Plaza, the renovated South Station, the park at Post Office Square, and 75 State Street, among others.

Equipped with a keen eye for all angles of urban life, Leventhal was a strong advocate of public spaces and amenities for all city residents. He conceived of and built the park at Post Office Square — now named Norman B. Leventhal Park — while his firm also constructed thousands of units of affordable housing in the Boston area.

“We must constantly work to find ways to make the riches of Boston available to all of her citizens, not just the most fortunate among us,” Leventhal told the Boston Globe in 1997.

Leventhal was widely known as a tireless benefactor to a wide variety of institutions, including MIT, the Boston Public Library, Beth Israel Deaconess Medical Center, and many other institutions and causes.

“Norman was a marvel: bold, brilliant, a visionary in his industry and an incredible public citizen, but so humble, so charming, so interested to know you — so interested in everything,” MIT President L. Rafael Reif said. “We are tremendously grateful for his service and generosity to the Institute — and for the power of his wonderful example. I could not be prouder to say that Norman Leventhal was a graduate of MIT.”

Alan Leventhal, one of Norman Leventhal’s sons and a member of the MIT Corporation, said that the Institute had a profound influence on his father’s life.

“In his self-effacing way, until the day he died, Sunday, he believed that if not for MIT, he would not have had the success he had in his life,” Alan Leventhal said. Norman Leventhal, he added, emerged from the Great Depression determined to “improve the quality of life for citizens in the community,” and spent much of his life thereafter mindful of working for the public good.

Building a life – and a legacy

Norman Bernard Leventhal was born Aug. 30, 1917, and grew up in the Boston neighborhood of Dorchester, the child of a Russian father and Lithuanian mother who had immigrated to the U.S. From a young age he was a superb student, and graduated from the prestigious Boston Latin School at age 15. Though admitted to Harvard University, Leventhal attended MIT partly because the Institute offered him a scholarship.

A civil engineering student as an undergraduate, Leventhal worked three jobs while attending MIT. After graduating in 1938, he became a naval architect during World War II, and co-founded the Beacon Construction Co. in 1946 with his brother, Robert.

Leventhal married Muriel Guren in 1941. In an interview with MIT Technology Review published in 2008, he described his greatest accomplishment simply as “marrying Muriel.”

Beacon Construction Co. grew significantly in the post-World War II years by tackling an array of projects across the U.S., from remodeling stores to building post offices and constructing public and military housing. The firm’s first large-scale project in Boston, one of which Leventhal remained especially proud, was Center Plaza, the long, curving office building in Boston’s Government Center, completed in 1969.

His work on South Station, as part of a public-private partnership, preserved the station’s striking neoclassical facade — a city landmark — while successfully rejuvenating the interior as a transit hub, public space, and setting for commerce. The renovated station opened in 1989.

Norman B. Leventhal Park, in Post Office Square, was the culmination of a decade-long effort to construct a new green space in the middle of Boston’s financial district. Leventhal spearheaded a public-private partnership that demolished an old parking garage on the site, built a new one underground, and designed the nearly two-acre park, which opened in 1992. It was named for Leventhal in 1997.

An inveterate walker who loved taking in the city on foot, Leventhal had one of Boston’s historic downtown walks named in his honor. The trail from Beacon Hill to Long Wharf was renamed the “Norman B. Leventhal Walk to the Sea” in 2008, dedicated by then-mayor Thomas Menino.

Leventhal saw philanthropy as an integral part of his life. He supported Beth Israel Deaconess Medical Center, of which he was a longtime board member, and a variety of other causes, including the Combined Jewish Philanthropies of Greater Boston.

Among Leventhal’s most distinctive gifts was the establishment of the Norman B. Leventhal Map Center at the Boston Public Library. Leventhal produced a book, “Mapping Boston,” published in 1999 by the MIT Press, which displayed and detailed key elements of his unique collection of maps of the city.

Leventhal was elected a fellow of the American Academy of Arts and Sciences, and was awarded honorary degrees from Boston University, Brandeis University, and Hebrew College. He was a director emeritus of the John F. Kennedy Library Foundation, an overseer of the Museum of Fine Arts in Boston, and a trustee of Boston’s Museum of Science.

An institution at the Institute

Leventhal’s relationship with MIT remained strong and active during the three-quarters of a century he spent as an alumnus of the Institute. He served as president of the Alumni Association in 1977-78, and in 1978 was given the Bronze Beaver Award, the highest award granted by the Alumni Association for service to the Institute. He served on the MIT Corporation from 1975 to 2015, including service on the Executive Committee from 1990 to 1992.

The Leventhals also helped create the Muriel and Norman B. Leventhal Center for Jewish Life at MIT, a resource for MIT’s Jewish community and the campus as a whole.

In addition, Leventhal served on many visiting committees, which evaluate components of the Institute. He chaired the Architecture and Planning visiting committee from 1976 to 1988, working with the likes of architect Denise Scott Brown and the architectural critic Ada Louis Huxtable.

“He had a great interest in art and architecture,” said Alan Leventhal, noting that his father’s intellectual interests were well served by his committee work at MIT. “He had an enthusiasm that never left him.”

In 1989, the Leventhals established the Norman B. (1938) and Muriel Leventhal Fund to support a professorship in the School of Architecture and Planning in the field of city-building and large-scale urban environments. Intellectually, Leventhal’s interest in maps and urban geography also put him on common ground with some of MIT’s most influential faculty in architecture and planning, who had created innovative studies of our visual perceptions of cities and urban spaces.

“Norman was passionate about Boston as a city, about making it a better place for everyone else,” said Adèle Naudé Santos, who got to know Leventhal while serving as dean of MIT’s School of Architecture and Planning from 2004-2014. She added: “He really cared about good urban planning, and the quality of our urban environment.”

Fellowships for doctoral candidates from underrepresented minority groups, in the sciences and engineering, were also named in honor of Leventhal by outside donors.

Leventhal is survived by his wife, Muriel; his sons, Alan and Mark; his daughter, Paula Sidman; 11 grandchildren; and eight great-grandchildren.

A memorial service will be held in Kresge Auditorium on Wednesday, April 22, from 10:30 a.m. to noon, with a luncheon immediately following in the Johnson Athletics Center.