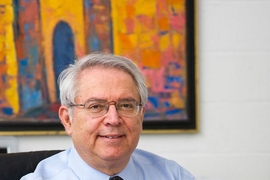 Mujid S. Kazimi, the TEPCO Professor of Nuclear Engineering and one of the world’s foremost educators and researchers in nuclear technology, died suddenly on Wednesday in China.

Kazimi, who was 67, suffered a heart attack while visiting Harbin Engineering University to participate in an international advisory committee. He held faculty appointments in MIT’s Departments of Nuclear Science and Engineering (NSE) and Department of Mechanical Engineering, and was director of both MIT’s Center for Advanced Nuclear Energy Systems and the Kuwait-MIT Center for Natural Resources and the Environment. He served as NSE’s department head from 1989 to 1997.

Current NSE department head Richard Lester shared the news of Kazimi’s death in an email to the department’s faculty on Wednesday, describing it as “a devastating blow.”

“The international community knew Mujid as one of the world’s great nuclear engineers,” Lester told MIT News. “In NSE, we also knew him as a wonderful human being. Wise, kind, tough when he needed to be, but always gracious and respectful toward his students and his colleagues — he was a true gentleman, and he was a good man. His dedication and loyalty to his students, and to the department, were inspirational. It is a huge loss for our department, and for our field. But his colleagues in NSE are grateful for the privilege of knowing and serving with him.”

Kazimi was born in Jerusalem in 1947, and later moved with his family to Amman, Jordan. He earned his bachelor’s degree in nuclear engineering from Alexandria University in Egypt in 1969, then came to MIT, where he earned an SM in 1971 and a PhD in 1973. Before joining the MIT faculty in 1976, Kazimi worked briefly at Westinghouse Electric Corp. and Brookhaven National Laboratory.

Kazimi was an expert in the design and analysis of nuclear power plants and the nuclear fuel cycle. He supervised 45 PhD theses and 80 master’s theses at MIT; Lester notes that many of his students have gone on to faculty positions at universities worldwide, or to leadership positions in the nuclear energy field.

Kazimi was dedicated to the advancement of the profession, and advised governments, universities, and research institutions on the development of nuclear energy. He authored over 200 scientific papers, and co-authored, with Neil Todreas, a two-volume textbook, “Nuclear Systems.”

Lester says that Kazimi’s contributions to the field included “numerous technological advances that promise to enhance the safety and economics of nuclear power plants.” Among his most important contributions are the development of annular fuel with internal and external cooling, offering the potential for dramatic reductions in the fuel operating temperature, thereby reducing the thermal energy stored in the fuel.

Kazimi also led efforts to develop a ceramic fuel cladding made of silicon carbide to replace the zirconium alloy cladding that is currently used in most reactor fuel. This new cladding, Lester says, “has the potential to reduce significantly the consequences of loss-of-coolant accidents in light water reactors,” because it greatly reduces the generation of potentially explosive hydrogen in such accidents.

Kazimi also made “a number of influential contributions to the development of technological strategies for the nuclear fuel cycle,” Lester says. “His research generated fundamental insights into the range of options for fuel-recycling technologies, enabling the sustainable development of nuclear energy along economically competitive paths that will take advantage of the abundance of natural uranium.” Kazimi co-chaired, with Ernest Moniz — the former MIT physicist who is now the U.S. Secretary of Energy — an influential, and widely read, interdisciplinary study on the future of the nuclear fuel cycle.

Kazimi received many honors for his work. He was a member of the National Academy of Engineering, a fellow of the American Nuclear Society and the International Nuclear Energy Academy, and recipient of the Kuwait Prize in Applied Sciences in 2011.

Kazimi served on many boards, including the board of trustees of Al-Quds University in Jerusalem, a committee on the rejuvenation of scientific research in Kuwait, and the international advisory board on nuclear energy for the United Arab Emirates. He was a member of the Nuclear Energy Advisory Committee of the U.S. Department of Energy, and at the time of his death was chairing its subcommittee on nuclear reactor technology.

Lester described Kazimi as “one of the world’s most distinguished educators and researchers in the field of nuclear technology. His outstanding scientific and engineering achievements are recognized around the world.”

Kazimi is survived by his wife of 41 years, Nazik Denny, by three children — daughter Yasmeen and sons Marwan (a 1996 MIT alumnus) and Omar — and by three grandchildren.

A memorial service for Kazimi will be held Oct. 1 in MIT's Bartos Theater, E15-070, beginning at 4:00 p.m. A reception will follow. Donations in his memory can be made to The Mujid S. Kazimi Memorial Fund to support future NSE graduate students.

For any questions about the memorial service, contact Carolyn Carrington at carrin@mit.edu or 617-253-7407.