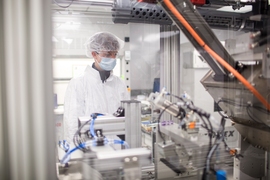 ↓ Download Image
Caption: A pilot manufacturing plant at 24M's headquarters in Cambridge has produced thousands of test batteries to demonstrate the efficiency of the new design.
Credits: Courtesy of 24M

Caption:
A pilot manufacturing plant at 24M's headquarters in Cambridge has produced thousands of test batteries to demonstrate the efficiency of the new design.
Credits:
Courtesy of 24M

Caption:
Unlike conventional, solid lithium-ion batteries, the new semisolid cells are flexible enough to be bent and folded multiple times without affecting their performance, as shown by the constant voltage readings in this test.
Credits:
Courtesy of 24M

An advanced manufacturing approach for lithium-ion batteries, developed by researchers at MIT and at a spinoff company called 24M, promises to significantly slash the cost of the most widely used type of rechargeable batteries while also improving their performance and making them easier to recycle.

“We’ve reinvented the process,” says Yet-Ming Chiang, the Kyocera Professor of Ceramics at MIT and a co-founder of 24M (and previously a co-founder of battery company A123). The existing process for manufacturing lithium-ion batteries, he says, has hardly changed in the two decades since the technology was invented, and is inefficient, with more steps and components than are really needed.

The new process is based on a concept developed five years ago by Chiang and colleagues including W. Craig Carter, the POSCO Professor of Materials Science and Engineering. In this so-called “flow battery,” the electrodes are suspensions of tiny particles carried by a liquid and pumped through various compartments of the battery.

The new battery design is a hybrid between flow batteries and conventional solid ones: In this version, while the electrode material does not flow, it is composed of a similar semisolid, colloidal suspension of particles. Chiang and Carter refer to this as a “semisolid battery.”

This approach greatly simplifies manufacturing, and also makes batteries that are flexible and resistant to damage, says Chiang, who is senior author of a paper in the Journal of Power Sources analyzing the tradeoffs involved in choosing between solid and flow-type batteries, depending on their particular applications and chemical components.

This analysis demonstrates that while a flow-battery system is appropriate for battery chemistries with a low energy density (those that can only store a limited amount of energy for a given weight), for high-energy-density devices such as lithium-ion batteries, the extra complexity and components of a flow system would add unnecessary extra cost.

Almost immediately after publishing the earlier research on the flow battery, Chiang says, “We realized that a better way to make use of this flowable electrode technology was to reinvent the [lithium ion] manufacturing process.”

Instead of the standard method of applying liquid coatings to a roll of backing material, and then having to wait for that material to dry before it can move to the next manufacturing step, the new process keeps the electrode material in a liquid state and requires no drying stage at all. Using fewer, thicker electrodes, the system reduces the conventional battery architecture’s number of distinct layers, as well as the amount of nonfunctional material in the structure, by 80 percent.

Having the electrode in the form of tiny suspended particles instead of consolidated slabs greatly reduces the path length for charged particles as they move through the material — a property known as “tortuosity.” A less tortuous path makes it possible to use thicker electrodes, which, in turn, simplifies production and lowers cost.

In addition to streamlining manufacturing enough to cut battery costs by half, Chiang says, the new system produces a battery that is more flexible and resilient. While conventional lithium-ion batteries are composed of brittle electrodes that can crack under stress, the new formulation produces battery cells that can be bent, folded or even penetrated by bullets without failing. This should improve both safety and durability, he says.

The company has so far made about 10,000 batteries on its prototype assembly lines, most of which are undergoing testing by three industrial partners, including an oil company in Thailand and Japanese heavy-equipment manufacturer IHI Corp. The process has received eight patents and has 75 additional patents under review; 24M has raised $50 million in financing from venture capital firms and a U.S. Department of Energy grant.

The company is initially focusing on grid-scale installations, used to help smooth out power loads and provide backup for renewable energy sources that produce intermittent output, such as wind and solar power. But Chiang says the technology is also well suited to applications where weight and volume are limited, such as in electric vehicles.

Another advantage of this approach, Chiang says, is that factories using the method can be scaled up by simply adding identical units. With traditional lithium-ion production, plants must be built at large scale from the beginning in order to keep down unit costs, so they require much larger initial capital expenditures. By 2020, Chiang estimates that 24M will be able to produce batteries for less than $100 per kilowatt-hour of capacity.

Venkat Viswanathan, an assistant professor of mechanical engineering at Carnegie Mellon University who was not involved in this work, says the analysis presented in the new paper “addresses a very important question of when is it better to build a flow battery versus a static model. … This paper will serve as a key tool for making design choices and go-no go decisions.”

Viswanathan adds that 24M’s new battery design “could do the same sort of disruption to [lithium ion] batteries manufacturing as what mini-mills did to the integrated steel mills.”

In addition to Chiang, the Power Sources paper was co-authored by graduate student Brandon Hopkins, mechanical engineering professor Alexander Slocum, and Kyle Smith of the University of Illinois at Urbana-Champaign. The work was supported by the U.S. Department of Energy.

Professor Yet-Ming Chiang’s company 24M has devised a manufacturing process that cuts the cost of producing batteries in half using liquid-battery technology, writes Brooks Hays for UPI. “The new method brings the benefits of liquid technology to big batteries—but without the baggage.”

Scott Kirsner writes for BetaBoston about 24M Technologies, a company co-founded by Professor Yet-Ming Chiang that has produced a safer, cheaper, and more durable lithium-ion battery. “We’re reinventing the lithium ion battery,” says Chiang. “The cost of the product is too high, and the manufacturing process is too complex.”

Scott Kirsner writes for BetaBoston about 24M Technologies, a company co-founded by Professor Yet-Ming Chiang that has produced a safer, cheaper, and more durable lithium-ion battery. “We’re reinventing the lithium ion battery,” says Chiang. “The cost of the product is too high, and the manufacturing process is too complex.”