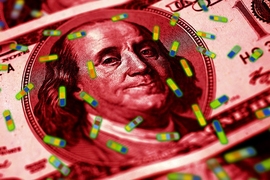 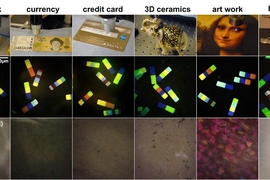 ↓ Download Image
Caption: MIT and Lincoln Lab researchers have developed microparticles that could be used to tag authentic products and help prevent counterfeiting. The particles are visible only when exposed to near-infrared light.
Credits: Image: Jiseok Lee 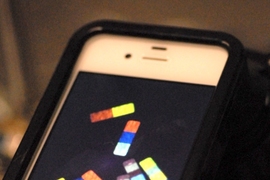 ↓ Download Image
Caption: The microparticles can be imaged and analyzed using a smartphone equipped with a special magnifying lens.
Credits: Image: Jiseok Lee

Caption:
MIT and Lincoln Lab researchers have developed microparticles that could be used to tag authentic products and help prevent counterfeiting. The particles are visible only when exposed to near-infrared light.
Credits:
Image: Jiseok Lee

Caption:
The microparticles can be imaged and analyzed using a smartphone equipped with a special magnifying lens.
Credits:
Image: Jiseok Lee

Some 2 to 5 percent of all international trade involves counterfeit goods, according to a 2013 United Nations report. These illicit products — which include electronics, automotive and aircraft parts, pharmaceuticals, and food — can pose safety risks and cost governments and private companies hundreds of billions of dollars annually.

Many strategies have been developed to try to label legitimate products and prevent illegal trade — but these tags are often too easy to fake, are unreliable, or cost too much to implement, according to MIT researchers who have developed a new alternative.

Led by MIT chemical engineering professor Patrick Doyle and Lincoln Laboratory technical staff member Albert Swiston, the researchers have invented a new type of tiny, smartphone-readable particle that they believe could be deployed to help authenticate currency, electronic parts, and luxury goods, among other products. The particles, which are invisible to the naked eye, contain colored stripes of nanocrystals that glow brightly when lit up with near-infrared light.

These particles can easily be manufactured and integrated into a variety of materials, and can withstand extreme temperatures, sun exposure, and heavy wear, says Doyle, the senior author of a paper describing the particles in the April 13 issue of Nature Materials. They could also be equipped with sensors that can “record” their environments — noting, for example, if a refrigerated vaccine has ever been exposed to temperatures too high or low.

The new particles are about 200 microns long and include several stripes of different colored nanocrystals, known as “rare earth upconverting nanocrystals.” These crystals are doped with elements such as ytterbium, gadolinium, erbium, and thulium, which emit visible colors when exposed to near-infrared light. By altering the ratios of these elements, the researchers can tune the crystals to emit any color in the visible spectrum.

To manufacture the particles, the researchers used stop-flow lithography, a technique developed previously by Doyle. This approach allows shapes to be imprinted onto parallel flowing streams of liquid monomers — chemical building blocks that can form longer chains called polymers. Wherever pulses of ultraviolet light strike the streams, a reaction is set off that forms a solid polymeric particle. 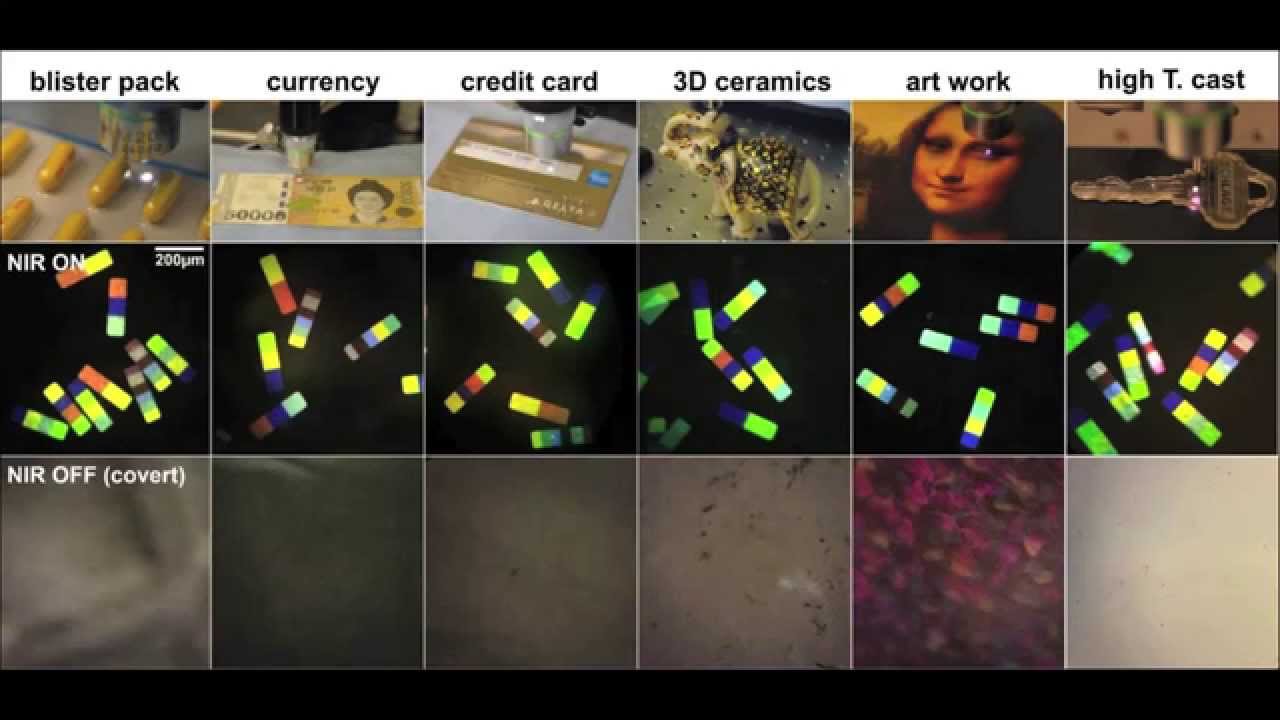 Using this procedure, the researchers can generate vast quantities of unique tags. With particles that contain six stripes, there are 1 million different possible color combinations; this capacity can be exponentially enhanced by tagging products with more than one particle. For example, if the researchers created a set of 1,000 unique particles and then tagged products with any 10 of those particles, there would be 1030 possible combinations — far more than enough to tag every grain of sand on Earth.

“It’s really a massive encoding capacity,” says Bisso, who started this project while on the technical staff at Lincoln Lab. “You can apply different combinations of 10 particles to products from now until long past our time and you’ll never get the same combination.”

“The use of these upconverting nanocrystals is quite clever and highly enabling,” says Jennifer Lewis, a professor of biologically inspired engineering at Harvard University who was not involved in the research. “There are several striking features of this work, namely the exponentially scaling encoding capacities and the ultralow decoding false-alarm rate.”

The microparticles could be dispersed within electronic parts or drug packaging during the manufacturing process, incorporated directly into 3-D-printed objects, or printed onto currency, the researchers say. They could also be incorporated into ink that artists could use to authenticate their artwork.

The researchers demonstrated the versatility of their approach by using two polymers with radically different material properties — one hydrophobic and one hydrophilic —to make their particles. The color readouts were the same with each, suggesting that the process could easily be adapted to many types of products that companies might want to tag with these particles, Bisso says.

“The ability to tailor the tag’s material properties without impacting the coding strategy is really powerful,” he says. “What separates our system from other anti-counterfeiting technologies is this ability to rapidly and inexpensively tailor material properties to meet the needs of very different and challenging requirements, without impacting smartphone readout or requiring a complete redesign of the system.”

Another advantage to these particles is that they can be read without an expensive decoder like those required by most other anti-counterfeiting technologies. Using a smartphone camera equipped with a lens offering twentyfold magnification, anyone could image the particles after shining near-infrared light on them with a laser pointer. The researchers are also working on a smartphone app that would further process the images and reveal the exact composition of the particles.

The research was funded by the U.S. Air Force, the Office of the Assistant Secretary of Defense for Research and Engineering, the Singapore-MIT Alliance, the National Science Foundation, the U.S. Army Research Office, and the National Institutes of Health.

Writing for The Boston Globe, Kevin Hartnett reports on how MIT researchers have developed a new technique to help curb counterfeiting. The researchers have designed nanoparticles that can be used to determine the authenticity of items.

“Scientists have developed a new microscopic barcode that can be embedded into currency, credit cards, and industrial packaging,” writes Wired reporter Helen Shen of a new development from MIT researchers that allows nanoparticles to distinguish between genuine and counterfeit goods.

MIT researchers have developed a technique that allows nanocrystals to distinguish between genuine and counterfeit goods, reports Wired reporter Liat Clark. The research could have applications in the sale of luxury goods and electronics, as well as vaccine quality control.