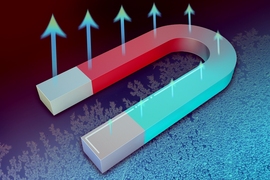 The magnets cluttering the face of your refrigerator may one day be used as cooling agents, according to a new theory formulated by MIT researchers.

The theory describes the motion of magnons — quasi-particles in magnets that are collective rotations of magnetic moments, or “spins.” In addition to the magnetic moments, magnons also conduct heat; from their equations, the MIT researchers found that when exposed to a magnetic field gradient, magnons may be driven to move from one end of a magnet to another, carrying heat with them and producing a cooling effect.

“You can pump heat from one side to the other, so you can essentially use a magnet as a refrigerator,” says Bolin Liao, a graduate student in MIT’s Department of Mechanical Engineering. “You can envision wireless cooling where you apply a magnetic field to a magnet one or two meters away to, say, cool your laptop.”

In theory, Liao says, such a magnetically driven refrigerator would require no moving parts, unlike conventional iceboxes that pump fluid through a set of pipes to keep things cool.

“People now have a new theoretical playground to study how magnons move under coexisting field and temperature gradients,” Liao says. “These equations are pretty fundamental for magnon transport.”

In many ways, magnons are similar to electrons, which can simultaneously carry electrical charge and conduct heat. Electrons move in response to either an electric field or a temperature gradient — a phenomenon known as the thermoelectric effect. In recent years, scientists have investigated this effect for applications such as thermoelectric generators, which can be used to convert heat directly into electricity, or to deliver cooling without any moving parts.

Liao and his colleagues recognized a similar “coupled” phenomenon in magnons, which move in response to two forces: a temperature gradient or a magnetic field. Because magnons behave much like electrons in this aspect, the researchers developed a theory of magnon transport based on a widely established equation for electron transport in thermoelectrics, called the Boltzmann transport equation.

From their derivations, Liao, Zhou, and Chen came up with two new equations to describe magnon transport. With these equations, they predicted a new magnon cooling effect, similar to the thermoelectric cooling effect, in which magnons, when exposed to a magnetic field gradient, may carry heat from one end of a magnet to the other.

Liao used the properties of a common magnetic insulator to model how this magnon cooling effect may work in existing magnetic materials. He collected data for this material from previous literature, and plugged the numbers into the group’s new model. He found that while the effect was small, the material was able to generate a cooling effect in response to a moderate magnetic field gradient. The effect was more pronounced at cryogenic temperatures.

The theoretical results suggest to Chen that a first application for magnon cooling may be for scientists working on projects that require wireless cooling at extremely low temperatures.

“At this stage, potential applications are in cryogenics — for example, cooling infrared detectors,” Chen says.  “However, we need to confirm the effect experimentally and look for better materials. We hope this will motivate new experiments.”

Li Shi, a professor of mechanical engineering at the University of Texas at Austin who was not involved in the research, says the magnetic cooling effect identified by the group is “a highly useful theoretical framework for studying the coupling between spin and heat, and can potentially stimulate ideas of utilizing magnons as a working ‘fluid’ in a solid-state refrigeration system.”

Liao points out that magnons also add to the arsenal of tools for improving existing thermoelectric generators — which, while potentially innovative in their ability to generate electricity from heat, are also relatively inefficient.

“There’s still a long way to go for thermoelectrics to compete with traditional technologies,” Liao says. “Studying the magnetic degree of freedom could potentially help optimize existing systems and improve the thermoelectric efficiency.”

The work was partly supported by the U.S. Department of Energy and the Air Force Office of Scientific Research.