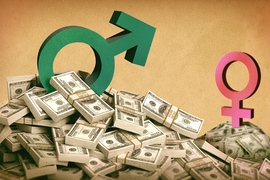 You can’t judge a startup by the looks of its founder — but many potential investors do.

That’s the upshot of a newly published study co-authored by MIT researchers, which shows that attractive men have disproportionate success in obtaining venture capital funding for startups, compared with women and with less physically appealing men.

More specifically, the success of the short pitches that entrepreneurs make to venture capitalists depends significantly on the gender and appearance of the presenters, according to the research. Those pitches — often around five minutes in length — are a rite of passage for entrepreneurs, and sometimes a make-or-break proposition for startups. But the decisions investors make, in response, may not be as rational as they would like to believe.

“The fundamentals of the entrepreneur’s business proposition and the previous experiences of the entrepreneurs themselves are regarded as the main criteria for investment decisions,” notes the paper, published this week in the Proceedings of the National Academy of Sciences. However, the authors add, there remains “a profound and persistent preference for entrepreneurial ventures pitched by men, particularly attractive men.”

For instance, in pitch competitions, male entrepreneurs are 60 percent more likely than women to succeed, other things being equal; the study finds that gender explains 42 percent of this variance. Meanwhile, physical attractiveness, as rated by those viewing pitches, produces a 36 percent increase in pitch success.

Moreover, in a controlled experiment the researchers conducted, identical business-plan videos were narrated by either male or female voices; respondents chose the plans presented by males 68 percent of the time.

“We don’t always like the results we find, but this sort of systematic evidence helps us to start a conversation and discuss ways to change biases and ensure that women can engage as effectively in innovation-driven entrepreneurship as their male counterparts,” says MIT professor Fiona Murray, a co-author of the paper.

The paper, “Investors prefer entrepreneurial ventures pitched by attractive men,” was written by Alison Wood Brooks, of Harvard Business School; Laura Huang, of the University of Pennsylvania’s Wharton School; Murray, the Alvin J. Siteman Professor of Entrepreneurship and associate dean for innovation at the MIT Sloan School of Management; and Sarah Wood Kearney, an affiliate of MIT Sloan.

In the field and the lab

Historically, women have faced significant difficulties breaking into the predominantly male startup culture. A 2009 report by Dow Jones VentureSource found that only 11 percent of firms with venture capital funding have been founded or led by women; a 2004 study by the Kauffman Foundation reported that such firms received only 7 percent of all venture funding.

However, the apparent gender imbalance among startups can be hard to study rigorously. For one thing, the authors note, male entrepreneurs tend to develop ventures across many industries, while female entrepreneurs focus more on businesses with a larger proportion of female consumers, such as cosmetics or cooking. On balance, the paper observes, male entrepreneurs pursue ventures with greater upside potential, making it hard to assess whether or not investors are irrationally dismissing startups led by women.

To get around this kind of problem, the study’s results derive from both field studies and research experiments. The researchers studied the empirical results of three pitch competitions over a three-year span, to see how attractiveness and gender affected the outcomes, and then conducted two web-based controlled experiments.

The first experiment, with a group of 521 participants, was the one in which 68 percent chose the startup pitches narrated by male voices. In the second experiment, another 207 participants were presented videos showing identical sets of business plans, along with photos of apparent startup leaders; the group was asked to rate how likely they were to invest in the startup, and asked to rate the attractiveness of the executives.

The study is part of a growing body of research intended to cast an empirical lens on the process of innovation in the wider economy.

“Our experiments are part of an emerging research field we call ‘innovation science’ — an approach to studying the messy process of innovation and entrepreneurship in a more systematic way,” Murray says. “By borrowing tools from the worlds of psychology, economics, and other social sciences, we can shed light on complex and often controversial issues.”

Other scholars say the paper makes a significant contribution to research on gender and business practices. Maurice Schweitzer, a professor of operations and information management at the University of Pennsylvania, calls it “brilliant, impactful, and eye-opening.”

Michael Norton, a management professor at Harvard University, believes the research could have practical benefit for venture capital firms. In the same way that the data-driven study of baseball has helped some teams find prospects who do not fit the traditional image, he notes — as detailed in Michael Lewis’ book “Moneyball” — some investors might gain an edge by systematically focusing on undervalued startups, such as those with female executives or less-attractive male leaders.

“We know progress has been made, but people still bring biases to the table,” Norton says.

Murray, who is also faculty director of the Trust Center for MIT Entrepreneurship, adds, “There is a lot we can do, as an educational institution, to raise these issues and make sure that the next generation of investors and entrepreneurs bring fewer biases to their professional work. The more women we encourage to participate in innovation-driven entrepreneurship, to pitch and go out seeking capital, the more usual it becomes. Over time this should reduce the bias in the system. At the same time, armed with an awareness of bias, women entrepreneurs can be more prepared and focused on their funding goals."

“A series of three studies reveals that investors prefer pitches from male entrepreneurs over those from female entrepreneurs, even when the content of the pitches is identical,” writes Carmen Nobel of Forbes on the findings of a new paper co-authored by Professor Fiona Murray.

NPR’s All Tech Considered looks at new research from MIT Professor Fiona Murray that indicates attractive males are more likely to receive funding for their startups than females.

Guardian reporter Holly Welham writes that MIT researchers “found that male entrepreneurs were 60% more likely than women to succeed and that physical attractiveness produced a 36% increase in pitch success.”

“Investors are more likely to put money into a business idea pitched by a man than a woman, according to a study published by researchers from Harvard, Massachusetts Institute of Technology and the Wharton School,” writes Matt Clinch for CNBC.

New research from MIT shows that investors are more likely to select business concepts pitched by men, in particular attractive men, as opposed to women, reports Richard Valdmanis for Reuters.